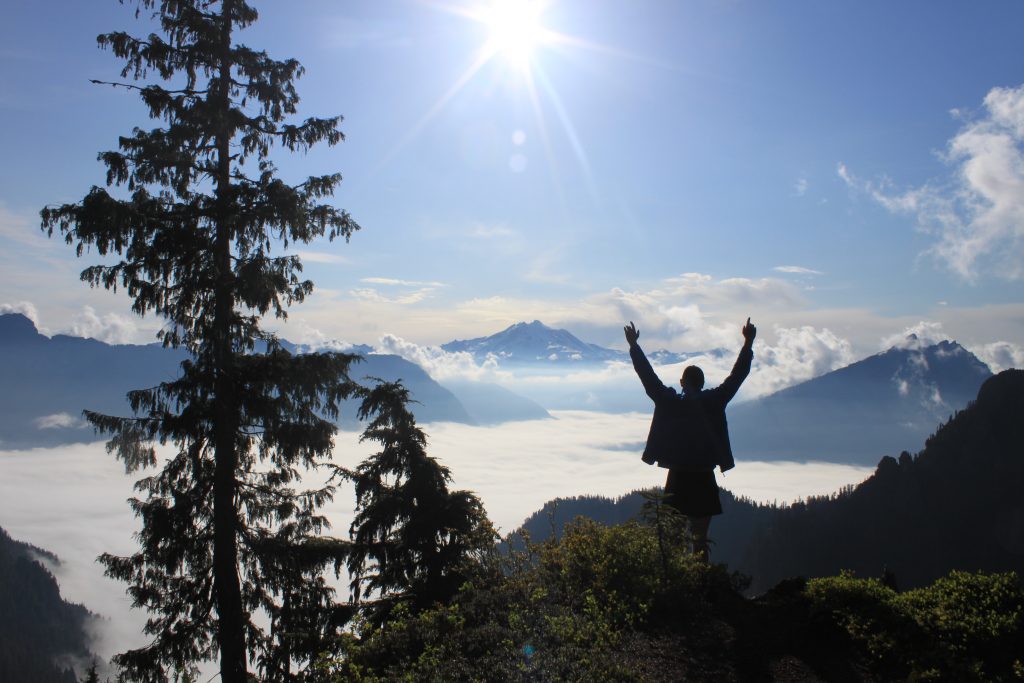 After Grant graduated from high school, he was planning to spend the summer working up in Alaska, so we wanted to sneak in a backpacking trip together before he left. Blake, Grant, and I left my work a little early one nice Friday afternoon and drove out to the Mountain Loop Highway, heading for Mt. Forgotten.

We parked at the familiar Dickerman trailhead, but this time started hiking up the Perry Creek trail for the first time. The trail was rather boring, in the trees for the most part but did get very pretty when we popped out into some meadows on the ridgeline between Dickerman and Forgotten. We called it the Forgotten Meadows and decided to set up camp next to a little pond.

The hammer Grant brought along was Thor’s Hammer, our cross country team’s symbol. Grant had the supreme honor of being the “Hammer Bearer” his senior year of high school. Chris was the Hammer Bearer the year before.

We decided to stave off dinner and instead climb up to a little high point to watch the sun set. It was a beautiful sunset over Three Fingers to the west.

Back at camp, we had a feast that included the half gallon container of juice Grant hauled up. You never know what these guys have in the packs!

The next morning, Grant and Blake slept in while I scampered out to watch the sunrise from our little high point again. It was cool to watch the clouds swirl down the valley in both directions around the Mountain Loop Highway around us. They seemed to be almost emanating from Glacier Peak.

After breakfast, we left camp with minimal gear and started on the climber’s trail over to Mt. Forgotten. It was a little steep sidehilling at times, but not too bad. Soon we contoured around the mountain to some snowfields where there were great views of Sloan and Pugh. We scrambled up through some loose class 2-3 gullies and eventually arrived on the little summit!

Looking at the summit register, it appeared we were the first of 2015 to summit! No too many people summit this peak in any given year though…

We retraced our steps back to camp, packed up and headed out. There were some day hikers reaching the meadows as we left, but we had the mountain all to ourselves overnight! It was a great send off for Grant and a chill time in the mountains with friends.