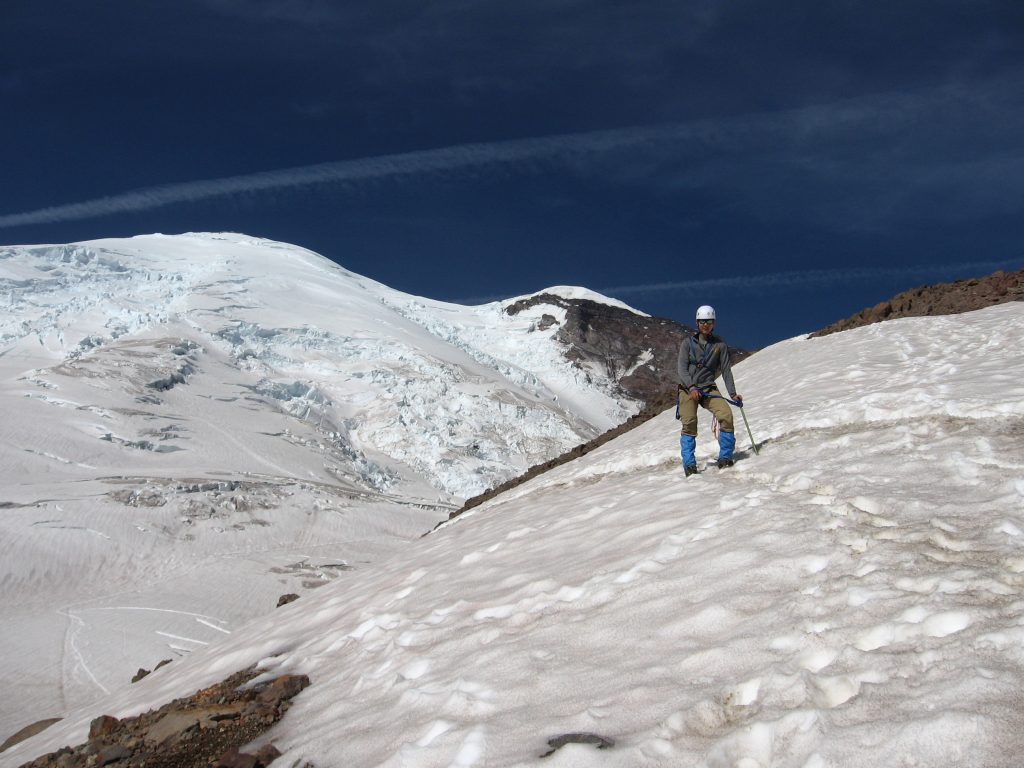 Growing up near Seattle, Rainier is a part of life. You see it every (clear) day, looming large in the south. And you see it from nearly every peak that you climb. It was always a goal of mine to climb Mt. Rainier, and when I got the opportunity to climb it some of my best friends from high school – Daniel, Logan, Chris, and Zeos – I knew I couldn’t pass it up! For those four, this would be the final peak in a month long trip called the “Twelve Peak Challenge” where they traveled from Baker to Shasta climbing Cascade Volcanoes. I had a good internship so just joined them on Adams and Rainier.

We planned 3 nights and 4 days to give us plenty of time to relax and possibly deal with bad weather. The first day, we just picked up our permits at the ranger station and hiked into Glacier Basin from the White River Campground. It was a very easy day, so in the afternoon Chris and I hiked up some of the scree fields, exploring a cave we saw from the valley floor.

When we got back to camp, it rained the rest of the evening, so we cooked a fancy pasta dinner and went to bed early. It was great to be back with these guys, and even just hanging out in a wet tent was so much fun.

The next appeared a little drier as we packed up and hiked towards the base of the Interglacier.

It was my first time actually being on a glacial rope team, but there were not any real crevasses to worry about on the Interglacier. We climbed up through a foggy mist. Higher up, it actually started snowing lightly.

At the top of the glacier, we transitioned to rock for a little before traversing down and around to the left and onto the Emmons Glacier. We were now standing on the largest glacier in the lower 48!

As we walked up the glacier towards Camp Schurman, the sky started to lighten and we even got some sun breaks. We arrived at camp at Emmons Flats midday and set up our tents.

When the sun came out on the glacier, it became blindingly bright and hot! I had just gotten prescription glacier sunglasses right before the trip, and these were totally worth the money!

The clouds came back in and we settled into our sleeping bags around 4 in the afternoon, hoping for better weather the next morning.

We woke up around midnight. Chris poked his head out of the tent and exclaimed, “It’s a sky full of stars!” Referencing the popular Coldplay song, which annoys Daniel. Nonetheless, the sky had cleared and we were looking at great weather for our summit push!

Once we finally organized all our gear and roped up, we started up “The Corridor”, a relatively crevasse-free path up the center of the Emmons Glacier. Because it was a historically low snow year, there definitely were lots of crevasses that we had to run around or cross on snow bridges, but we never hit a dead end, just following the bootpack and our intuition. Logan did a great job in the lead, as always. I was in the middle of our 5 person rope team, since I was least experienced.

As we got higher on the glacier, colors started to fill the northeastern sky. Slowly purple turned to red and orange. We were nearing the bergschrund when the sun finally peaked over the horizon, basking the mountain in beautiful hues. It was one of the most glorious experiences of my life.

The last few hundred feet were pretty tiring. I think we all felt the effects of the altitude.

We reached the summit still in the early morning. All around us were lowland clouds. It truly felt like we were standing on top of the entire world.

We took our time watching the ants from the DC route stream across the summit crater and join us. They all seemed to arrive at once, and suddenly there were 30 people with us from all over the world. The took a few pictures and then turned around and we once again had the summit to ourselves.

When we had enough, we started heading down. It got real warm on Emmons Glacier with the glaring sun in our faces and reflecting off the snow.

We got back to camp sometime in the early afternoon. Since we had another night on the mountain, we decided to spent the afternoon rappelling into some crevasses.

We found a nice, wide bottomless crevasses and set up anchors to rappel on. It was my first time rappelling! Once a good ways in, I tried ice climbing out, but the snow walls were a little too soft. Then I discovered how challenging prusiking up the rope is in a crevasse. Warm mushy snow kept pummeling me from above and I got soaked pretty quickly. Eventually, however, I made it up.

The next day, we just packed up and had an easy hike out. It was incredible to look back up at the peak and know that we had finally stood on top.

Climbing Rainier was a dream come true and pretty crazy considering a year before I was just starting to backpack! Thank you Daniel for having the initiative to organize this trip and thanks to Logan, Zeos, and Chris for being the best mountain buddies!