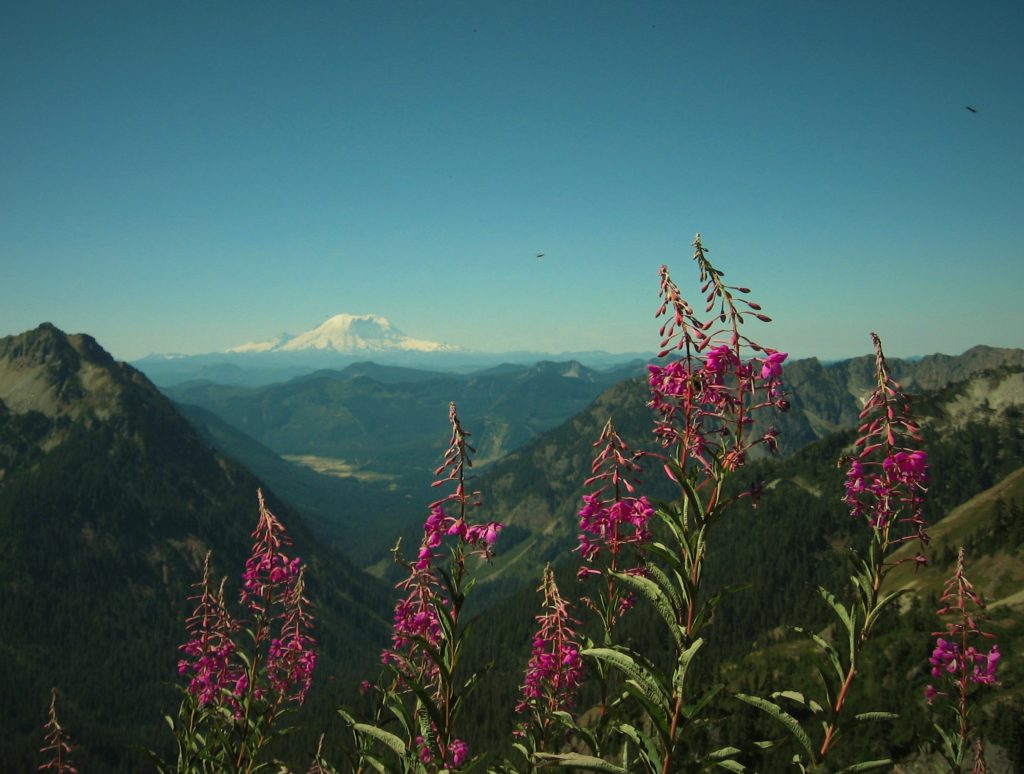 When I started backpacking and mountaineering, I was a fast little kid, but weighed down by old heavy gear that was older than I was. I knew nothing about fast and light, more like slow and heavy. At one point, I remember seeing normal people (like not professionals) covering 30 miles in a day in the mountains! Amazing! I figured I could at least do that considering I was a decent runner. So I called up two of the best runners I know, Ethan and Blake, and planned an epic run of Chikamin Peak from Snoqualmie Pass on the PCT.

The day started off nicely on the PCT and naturally, we made the mistake of trying to run the 5 miles uphill to the Kendall Katwalk. The Katwalk was very cool, a worthy destination on its own. It is a 5 ft wide ledge blasted out of the cliffs for the PCT.

The PCT from the Kendall Katwalk on was very pretty with moderate ups and downs. We met an older guy who had amazingly attended Inglemoor High School, our alma mater (and Ethan’s current school), nearly 30 years ago!

We held a pretty good pace all morning, alternating between jogging and hiking. We picked up pace on the downhill beneath Chikamin and Ethan and Blake ran away from me with their speed. Soon we left the PCT and got our first view of Glacier Lake on the backside of Chikamin. It was around here that Ethan actually realized he had been here just weeks ago with his family!

Glacier Lake was a beautiful lake set underneath Chikamin Peak. We were 15 miles in, about halfway through our mileage for the day, and I was feeling decent. I had already covered more miles in one day than I ever had before in the mountains!

After a lunch break, we skirted the sides of the lake and made our way up past Lake Chick Corea. From there, it was more easy class 2 slab walking and scrambling. Here, on the steeper terrain, I was the fastest of the group. When we reached the summit ridge, we met some other parties. The summit was cool! At 7,000 ft, it had great views of the Snoqualmie Pass area and Alpine Lakes Wilderness.

The descent straight down the south side was a bit harder than expected. We knew the PCT was a mere 1000 ft below us, but the gullies were loose and moderately exposed. A painful hour or two of carefully butt schootching and avoiding projectiles spat us out on the PCT. We were glad to be back on trail!

During the section back to Ridge Lake, I began to wilt in the afternoon heat. 20 miles was catching up to me, and I knew I wasn’t drinking enough water. Suddenly, the PCT seemed very hilly with lots of ups and downs. I could tell Ethan was tiring too.

We fueled up at Ridge Lake before the final major climb back to the Kendall Katwalk. I was completely exhausted and we still had 5 miles left! Every part of my body felt drained and sucked for energy. It was a complete exhaustion I had never felt before. I had finally hit the wall. I was not sure how I was going to finish.

We took a long break at the Katwalk, lying on the flat trail. The sun was starting to get low in the western sky and the trail, which was bustling earlier in the day, was serene and calm. And it suddenly hit me how incredibly beautiful and special the moment was – the place, the time, the partners. For the last few miles, I had been looking inside myself for this extra reserve of energy, but at that moment I realized that it was all around me, in the sky, in the hills. It gave me emotion, strength, and joy. And what better way is there to express joy than to run and jump?

We stood back up together and began to jog down towards Snoqualmie Pass. A jog turned to a run and by the last mile, we were nearly racing to the finish! It felt so powerful to face my demons of doubt, and come back even stronger. All in all, it was 32 miles and over 9000 ft of gain, by far my biggest day in the mountains! When you’re too young and naive to know you’re supposed to work your way up to an ultramarathon, there is no reason stopping you from doing it! I learned what it feels like to hit the wall, and more importantly, what it feels like to break through the wall. Thanks, Blake and Ethan, for suffering through and experiencing a magical day in the mountains together!