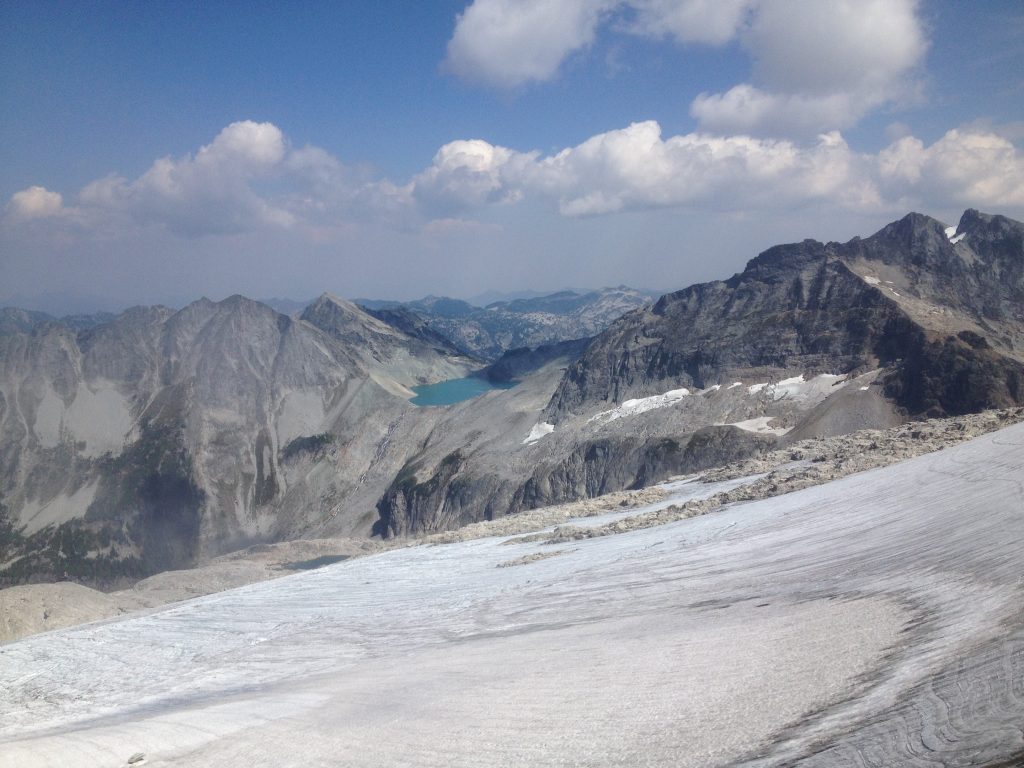 After our stunning success on Chikamin Peak, covering over 30 miles in a day, I thought Hinman would be another fun climb close to the marathon distance. Blake’s friend Tyler was visiting from Japan and wanted to go for a little hike, maybe Lake Serene? Why not Mt. Hinman? Tyler ran in college with Blake, so I knew he could handle it. Chris and Logan joined through the crew to make a four five fun young guys ready to run and scramble.

We were much smarter this time around, not running the uphills and employing a lot of fast shuffling. Still we kept up about 12 minute miles along the East Fork Foss river trail. The climb up into Necklace Valley was pretty steep and rooty. Necklace Valley itself was not quite as picturesque as I expected with its swampy little lakes, but maybe it was the mosquitoes that taint the memories.

At the head of the valley, the trail fades and you began an off trail climb up to La Bohn Gap. To the right is the climb to the famous Tank Lakes, but we’ll save that for another time. The boulder scrambling was not too bad, but we had to be careful in a group of five to not hit each other with loose rocks. The La Bohn Lakes were high, pristine, and alpine. This is what the Alpine Lakes Wilderness is all about! We hung out here for a while, drinking water and playing on the lakeshore.

From here, we scrambled up the ridge until it flattened out some and became very broad and wide. Now we could see most of the rest of the ridge to Hinman, and it sure looked like miles of class 2 to go!

Since Blake had a collegiate race in about two weeks, he dipped out here and found some nice rock slabs to take a nap on in the sun. The rest of us continued on. The scrambling was generally easy and quite good, but we were slow and it took us a while. We also crossed the upper part of a few receding glaciers on the north side. Since it was August on a historically low snow year, these glaciers were pretty thin. But it was cool to look all the way down to crystal clear blue tarns at the base of the glaciers.

Eventually, we reached the summit ridge, where we had a good view across the main glacier to Mt. Daniel and Dip Top Lake. It appeared that the true summit of Hinman was actually half a mile further on the ridge, but our high point was very close in height so we decided to call it quits here.

Then we began the long traverse back down the ridge towards La Bohn Lakes, picking up Blake along the way. The descent down to Necklace Valley was not too bad. As we were descending down to the river valley, Blake got stung by a bee. He is allergic to bees but was not carrying an Epi pen and began to get hives and have some trouble breathing! We had no other allergy medications and no cell service, so after some discussion, Chris and I took off down the trail as fast as we could, trying to find anyone with medication or running all the way out to Skykomish if necessary.

Luckily, within a few miles, we passed a woman who was a pharmacist and she was carrying some Benadryl. We decided to give that a shot and shuttled it back to Blake. He took the pills and his reaction began to settle down, enough we could walk the rest of the way out.

It was a long and exciting day out to Hinman and back, totaling something like 25 miles and 7000 ft gain. Props to Tyler for handling his first big hike and scramble like a champ! I would definitely recommend Hinman as a trail run / scramble, but I would not recommend heading out there without allergy meds or an Epi pen if you have an allergy like that! Lesson learned.