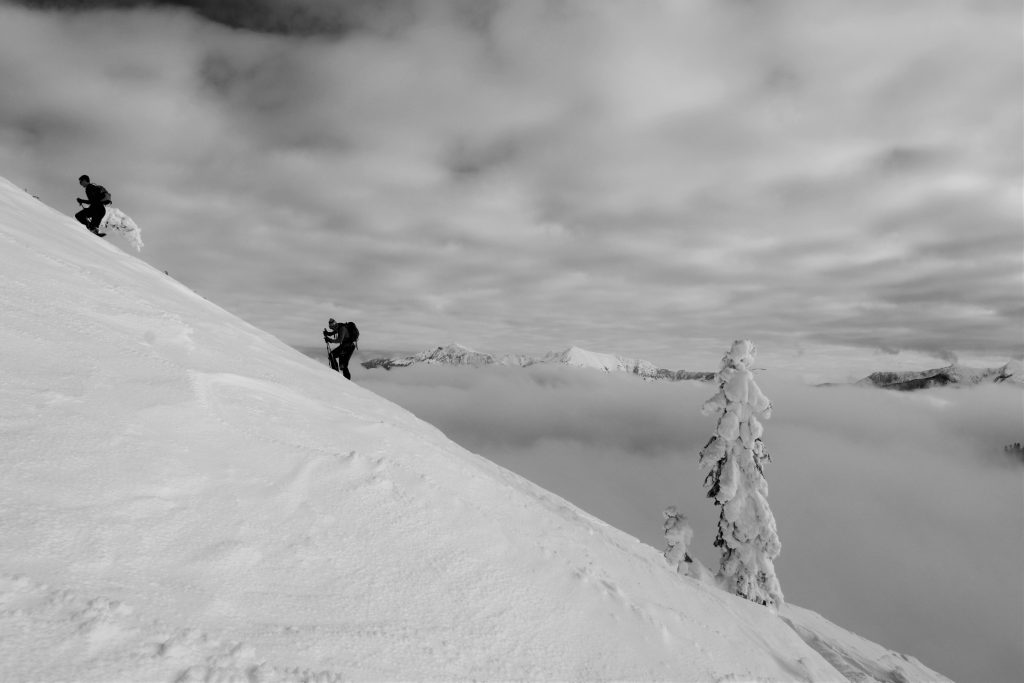 Rising Above the Clouds

Gonzaga University has a ridiculously long winter break. I try to make the most of these breaks, so towards the end of the break, I got my friends Kanyon and Connor together for a snowshoe trip, along with Kanyon’s dad, Jim. Kanyon and Connor both live close to my home and went to neighboring high schools, but I only met them at college.

I selected Mt. McCausland near Stevens Pass because it seemed like a long, but not too challenging snowshoe trip without too much avalanche danger. Jim was taking his backcountry skis out for the first time, but we were just showshoeing along. Unfortunately, when we got to the pass, the east side was all socked in with fog from the cool air and easterly flow.

The approach starts with 3 miles on the snow covered Smithbrook Road. I immediately saw the benefits of touring skis over snowshoes. But once we left the road and starting climbing through tighter forests, Jim was struggling. Perhaps I did not choose the optimal path for a skier, but hey, I am not a skier.

When we finally reached the saddle above Lake Valhalla, we were still in thick fog, but it seemed like there were openings in the sky above us. As we started up the south ridge of McCausland, we suddenly broke out above the clouds. It was super epic.

The ridge was getting pretty steep and powdery for snowshoes, but we continued on, knowing we were not far from the top!

The view from the summit was one of the most majestic things I have ever seen. We were sandwhiched between high clouds and lower fog, leaving only the snowy alpine peaks of the central Cascades around us. It seemed as if the world was nothing but snowy mountains. Winter forever.

I got some great shots of the boys.

The snowshoe down was much faster since we had already broken trail, but Jim demonstrated just how much faster skis were, although he got stuck in the flats a few times. We were quickly back into the fog, and it felt like we just left behind a different world, a magical world where we were all alone above the clouds.

Once back at the road, Jim said goodbye and proceeded to zoom back to the truck, where he had some beers stashed. The three of us were getting pretty tired, but continued on, happy to get some great moments above the clouds.

This was a super fun day with some guys who I don’t hike with as frequently, so it was nice to share the outdoors with them! The weather was classic Cascades: disappointing at first, but rewarding in the end for those who push on and persevere. Those moments above the clouds are why I keep coming back for more.