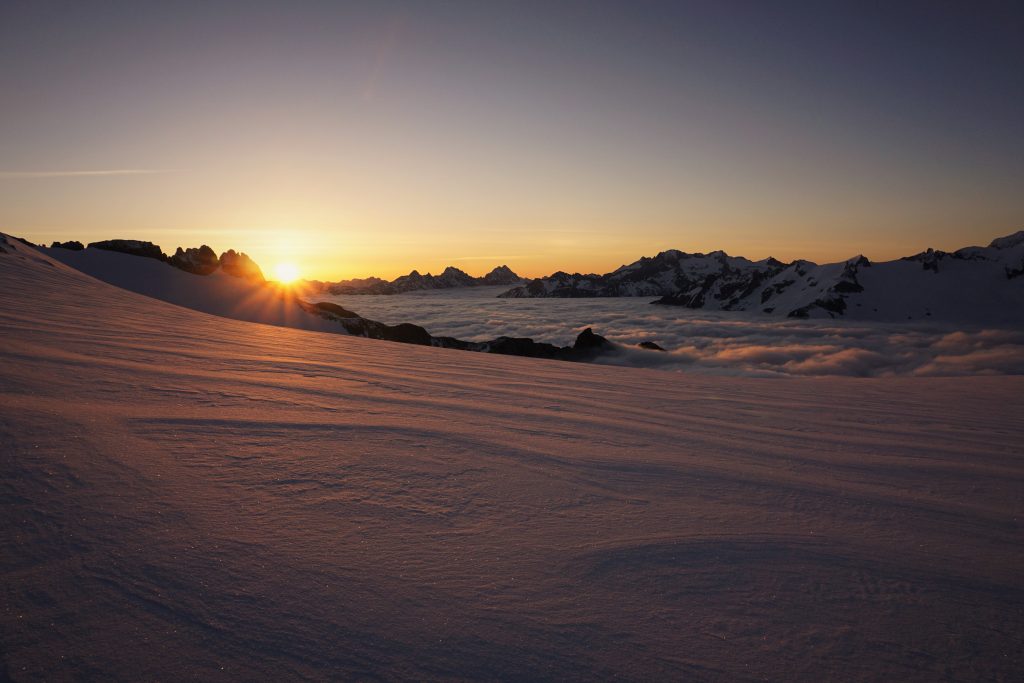 The Peak of Gold

Ever since seeing Eldorado for the first time, it has captivated me. Its lofty height, tremendous vertical relief, and knife-edged summit make it a true Cascade classic. Over Memorial Day weekend, Daniel, Logan, Chris and I decided to brave the questionable weather forecast and go for gold.

The approach started with a log crossing of the raging Cascade River and then a very steep approach trail. It was not too brushy, pretty well defined by climber’s trail standards, but we were still quickly soaked in the wet undergrowth. And boy was it steep! That trail did not mess around.

The rain undulated but rarely completely stopped. Climbing over the boulder field was pretty miserable. This is what the forecasters mean by 50% chance of showers, right? Finally, we reached treeline, which also happened to be snow that day. Climbing up through open snowfields with light snow falling, we were finally able to dry off and warm up.

As we were approaching the top of the gully to descend into Roush Creek Basin, a solitary figure came running up to us in the snow. It was a National Park climbing ranger and he asked to see our permits. We showed him our permits and then he turned around and started down. It was one very long climb to check our permits!

After descending into Roush Creek Basin, we started climbing up open snowfields, keeping the cliffs on our right as a handline. At some point, we stepped onto the Eldorado Glacier proper, but it was a blizzard at most times so who knows when precisely that happened.

When we reached a flat spot around 7400 ft, we decided we must be at the start of the super huge Inspiration Glacier, so this was a good place to camp. We struggled to get the tents set up in icy cold winds. Everything like linelocs and zippers were freezing and gathering rime ice so quickly that we had to use the warmth of certain bodily fluids to unfreeze them.

When we finally settled in, we spent the afternoon lounging around and staying warm. The clouds started to drop and precipitation stopped.

We woke the next morning around 4 am, ready for an alpine start. It was absolutely freezing outside as we struggled to get all of our gear ready and setup the rope team. The clouds were 1000 ft below us, giving us our first real views of the Cascade River Road Peaks. In the pre-dawn light, Johannesburg looked massive across the valley. It was so utterly calm and peaceful.

We had been moving for probably no more than 10 minutes when the sun’s first glorious rays hit us. The sun reflected on the windswept powder in front of us. Across the valley, the white-coated pointy summit of Forbidden turned pink. Buckner, Logan, and Stormking loomed in the direction of the sun. It was a magical moment I will never forget.

In the suns rays, we warmed up quickly. When we reached the east ridge, we turned left and started up the ridge.

As we neared the summit, the ridge got narrower and turned into the famous knife-edge that I had seen so many times in photos. I had dreamed of this moment.

We stopped maybe 75 ft short of the summit. The recent winds and fresh snow had built up a big cornice on the summit and the final slopes were in excess of 45 degrees. There was another party at this point too in front of us. They had tried to protect the final pitch with pickets, but the unconsolidated powder was not very confidence-inspiring. We decided to call it quits at this point.

Ultimately, we were not disappointed. The views were simply heavenly. Eldorado was everything I had imagined she would be: prominent, surrounded by the mightiest peaks of Washington, glaciated on all sides, simply wonderful. With the clouds still around 5000-6000 ft or so, we looked out across the North Cascades and only saw islands in the sky, solitary peaks poking above an ocean of clouds. As far as the eye could see, in all directions, it was mountains. It was the most beautiful thing I had ever seen.

It was now a sunny, warm day so we took our time before heading down.

Since we had seen minimal signs of crevasse hazard on the way up, we felt comfortable unroping for the descent.

The return trip went rather quickly, but was not without excitement. In the lower snowfields, Chris broke through a snowbridge and nearly fell into a deep river under the snowpack, only caught by his bulky backpack! Spring snowbridges can be pretty scary…

The boulder field sucked, but not quite as much as on the way up. We took one last long break here, admiring the Cascade River Valley before plunging into the woods.

I think Eldorado Peak is the most beautiful mountain I have ever visited. And that alone, makes it worth all the suffering involved to get there. The magical sunrise consummated all the cold and snow from the day before, because one would not have been so special with the other. I hope to explore the Cascade River Valley and the North Cascades more in the future, because I now can appreciate how truly special they are.