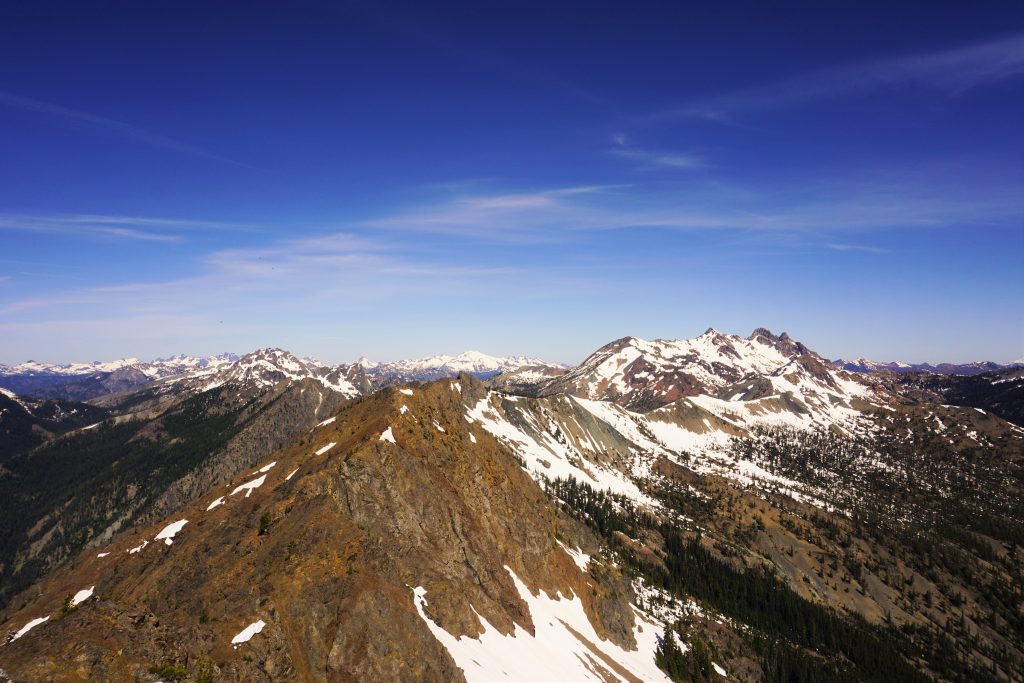 When 10 Peaks are simply too many…

I wanted to get back in the mountains with my runner friends Blake and Gavin, so we planned an athletic peak bagging adventure in the Teanaway Range of the eastern central Cascades. I had heard of people doing ten peaks from Iron to Navaho Peak, so that seemed like a fun trip to try with some fast moving partners.

When we arrived at the trailhead, we were shocked to see hundreds of cars already there and we had to park a ways back. Even stranger, all these people were grouped around the trailhead. Turns out it was hundreds of people from the Seattle Mountaineers, all part of the beginner mountaineering course! They looked at us strangely as we jogged by in our short shorts, starting up the trail towards Iron Peak.

The Teanaway is one of the driest parts of the Cascades. The forests are thinner, reminding me of the continental ranges some. The trail was pretty moderate, allowing us to job uphill mostly.

Once we reached the head of the basin, we started up towards Iron Peak, first through barren ground and then onto easy snowfields. We had completely left any crowds at the trailhead behind.

After gaining the saddle to the north of the peak, it was an easy ridge trot to the true summit.

We only took a short break at the summit, and then began reverse our steps back towards Teanaway Peak. The scramble up it was a little more challenging, but still mostly class 2.

From this summit, we had a great view of the red rock of Ingalls and the wide Ingalls creek drainage that gives way to the mighty Stuart Range.

We also had a great view of the next peak, Bills Peak. I had read briefly that people go up the southeast ridge mostly, but the southwest ridge seemed more convenient from our current location and would be most natural as a traverse. It looked steep but pretty reasonable, so we decided we would go for it.

We scrambled down to the saddle between Bills and Teanaway and then started up the snowfield to gain the southwest ridge of Bills. The snow here was still shaded and firm, so I gave Gavin and Blake each one microspike and one pole since their normal running shoes had less grip than my trail runners. Once on the ridge, the real scrambling began. It felt moderately steep and exposed at times, probably class 3+. Generally the rock was okay, but there were some loose spots.

The summit of Bills Peak had a commanding view over the Teanway and massive Stuart Range, so we took a moment to appreciate the views.

The descent down the east side of Bills Peak was a hoot, featuring sustained boot skiing and scree skiing down moderate slopes. I got some good connected sections, transitioning perfectly from scree skiing to boot skiing. After that, there was a long, gentle climb to the summit of Marys Peak. We took our lunch break here and dried out our shoes.

After the break atop Marys Peak, we began the short trek over to Judis Peak. This was mostly downhill on easy terrain, so we were able to jog. Suddenly, we passed swarms of people, all of the Seattle Mountaineers! There were literally dozens of people sliding down these low angle snow slopes with ice axes as we trotted by in our running shoes and short shorts. They cheered for us and got out of our way nicely, but it is not like we were trying to win a race or anything. After tagging Judis, we made our way back towards Marys and said goodbye to the crowds once again, not to see really anyone for the rest of the day.

The traverse to Bean Peak looked pretty long and challenging, but we did not want to drop down and lose a lot of elevation so we went for it. Looking back, it probably would have been faster to drop off the ridge, but hey, we wanted to make this a pure ridge traverse, right?

There were many ups and downs along the way to the summit of Bean. This traverse really took a lot out of us and it was now late afternoon. Volcanic Neck and Devil’s Head were not too far away, but they looked really chossy so we agreed to skip those.

We descended to the pass to the east of Bean and started up the ridge towards Earl Peak, the highest of the group. But about halfway to the summit, we realized the pointlessness of all this and decided to go into town and get dinner. So we scrambled down to the valley floor and then hit the main trail. With this group, it was fun to let the legs loosen up a little, cruising the last few downhill miles at 7-8 minute mile pace. When we got back to the trailhead, all the cars were gone! The mysterious Mountaineers had disappeared once again…

2 thoughts on “The Teanaway Six”