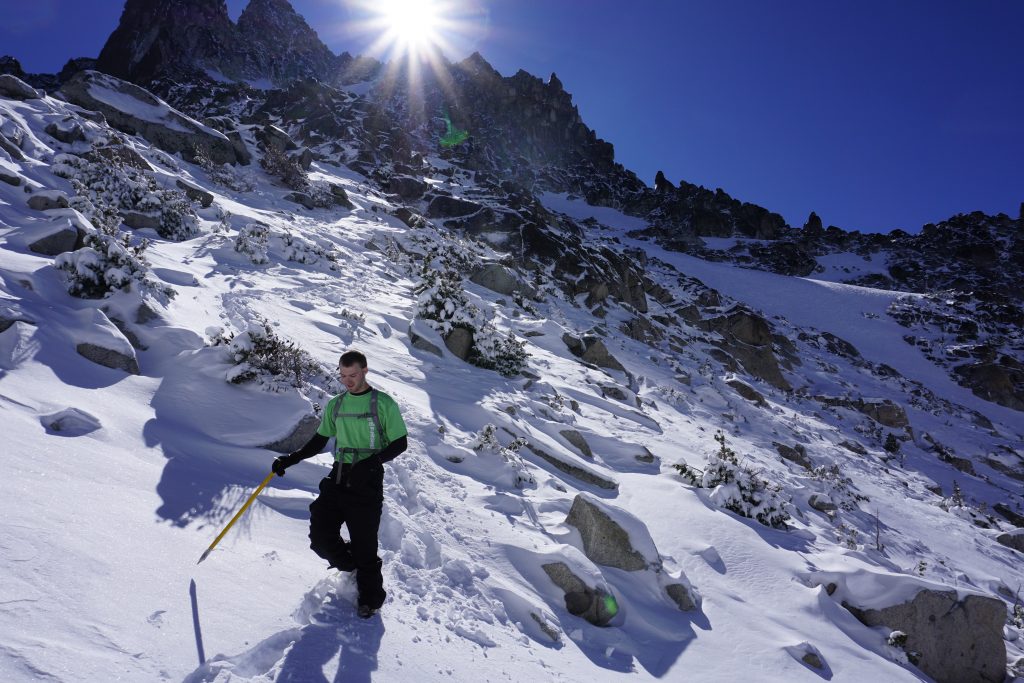 With a fresh coat of June snow once again over most of the Cascades, Chris and I headed east to the Enchantments. I had been to Colchuck Lake and Aasgard Pass briefly before, but both of us had never really been up in the Enchantments and were thrilled to check out the famous area.

We left the car around dawn and hiked through seasonally cold temperatures to Colchuck Lake. Dragontail had a fresh dusting of snow.

We hiked around the side of the lake and then began heading up the boulder fields towards the Colchuck Glacier moraine. The sun came out and it was suddenly quite warm! The moraine was huge, and Dragontail’s imposing walls seemed even bigger up close.

Once we got onto snow and the Colchuck Glacier proper, we were flying up consistent 35 degree snow! As we got higher, there was actually a decent amount of fresh powder from the previous storm. An hour or two later, we reached Colchuck Col and found a marvelous view south all the way to Rainier and Adams!

The scramble up towards the summit of Colchuck was not too difficult, but the fresh snow was quickly turning mushy and made for some post holing and slippery scrambling.

It wasn’t long before we were standing on top, with some of the most beautiful summit views we had ever seen before! It was cool to be so far from the places we normally climbed at, which were more on the west side of the Cascades. Mt. Stuart looked even more insane from this perspective than from the west!

We then retraced our steps back to Colchuck Col and started up towards the snow tongue that would lead us to the other side of Dragontail. Luckily, there were boot prints in front of us so it saved us some fatigue.

Once at the notch, there were some super cool rock formations around us. They looked like cats and some pretty fun boulder problems if you had a rope to throw over the top.

We met a few people at this notch, a Mountaineer’s party. Looking down, there was a super steep snowfield! It appeared to be at least 60 degrees. The group ahead of us was rappelling. We didn’t know about this and didn’t bring a rope. I had some running shoes, crampons, and an ice ax. Chris had some old beefy double boots and archaic crampons that balled up in the warm sun. We decided to just downclimb it.

From there, we scurried across snow and boulders to the summit of Draongtail, where we caught up with the Mountaineer’s party. It was a beautiful summit, even higher than Colchuck!

The descent down towards Aasgard Pass was very easy, cruising down the open slopes of the Snow Creek Glacier.

We glissaded, hiked, and then schwacked our way down Aasgard, getting off trail too many times, like usual. Then it was the normal slog back down the trail to the car for a fine day in the mountains! Thanks Chris!