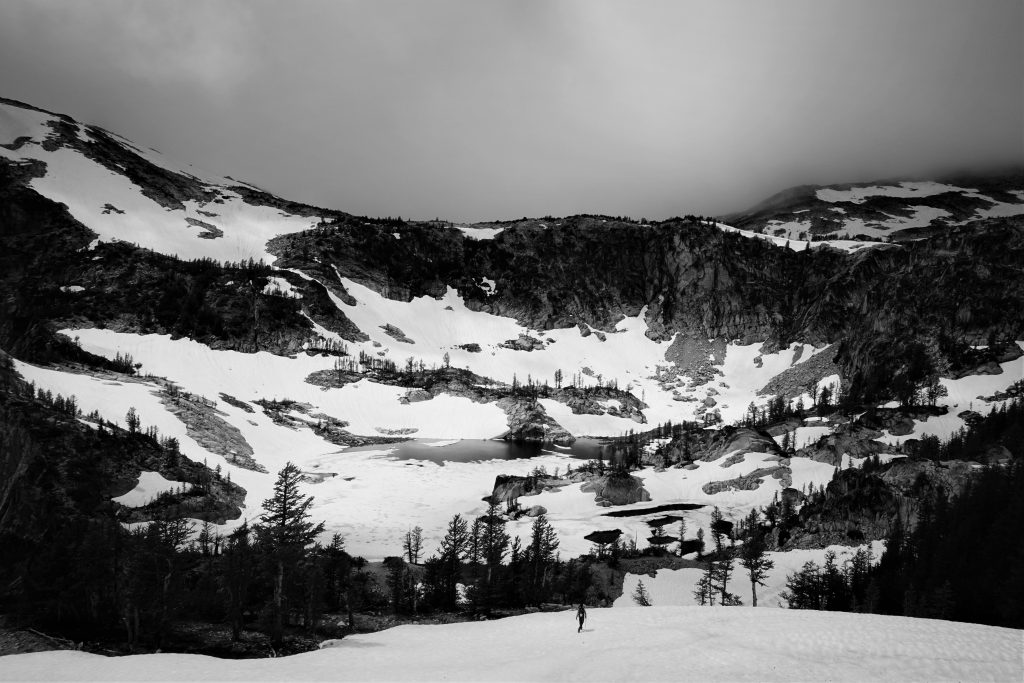 Once again bad weather drove Daniel and I eastward to the Enchantments. After nabbing Colchuck and Dragontail with Chris a month ago, our plan was to climb McClellan and Little Anapurna along with an Enchantment thru-hike, considering Daniel and I both had not done it. We got to the Snow Lake trailhead around 7 am and tried to hitchhike to the Colchuck Lake trailhead, but after 20 minutes of waiting, we decided to just suck it up and do the thru-hike “backwards”, adding an extra 2000 ft of gain.

The hike up the Snow Creek drainage was long and boring as it climbed into the hanging valley, but at least we were fresh and moving quickly. At Nada Lake, we saw a mommy goat and kid posing perfectly for the photo.

At Snow Lake, there was a good amount of water flowing over the spillway dam. Daniel took off his shoes and braved the cold rushing water in bare feet, but I trusted my La Sportiva Crossover 2.0 GTX to keep me dry, and they did.

Snow Lake was honestly a pretty unattractive lake, at least by Alpine Lakes Wilderness standards. I could not understand why it is such a sought after permit destination, except for its proximity to the core zone.

After Snow Lake, the trail got steeper, with some slabby sections, weaving through cliffs. About 4 hours in, we arrived at Lake Viviane, the first lake in the core zone. Even though clouds swirled around us, it was beautiful.

After Leprechaun Lake, we traveled cross country towards a tower called The Prong. Getting up to the notch next to The Prong had one short steep snowfield that was a little icy, but we were able to kick steps up it. Once on the ridge, there was some fun 3rd and 4th class scrambling to the summit of McClellan.

We dropped back down the snowfield and started traversing west towards Crystal Lake.

We fueled up at Crystal Lake and started the steepest climb directly up Little Anapurna. While the terrain was not difficult, we were starting to feel the 8,000+ ft of gain on the day. Additionally, we finally found ourselves in the fog and light rain that plagued the forecast across the Cascades.

At the summit, it was windy and cold. We got a few views of the Teanaway range to the south, but that was about it.

We did not hang out too long and descended towards Isolation Lake and the upper core zone.

Another downside of doing the thru-hike in the opposite direction was having to descend Aasgard Pass. We got a little off route and had to do some wet scrambling to get back on route. The Colchuck Lake trail was predictably boring and we arrived at the trailhead about 12 hours after starting. Because it was evening and everyone has to drive out past the Snow Lakes Trailhead, it took no time to hitchhike back to our car. Another benefit of doing the thru-hike backwards!

I think Daniel and I really made the most of this poor weather window, tagging a few big peaks and seeing many beautiful lakes. Both of us had never traveled through the famous core zone, so it was good to get that experience. And with the bad weather, I think we only saw one other party through all of our off trail travel in the core zone!