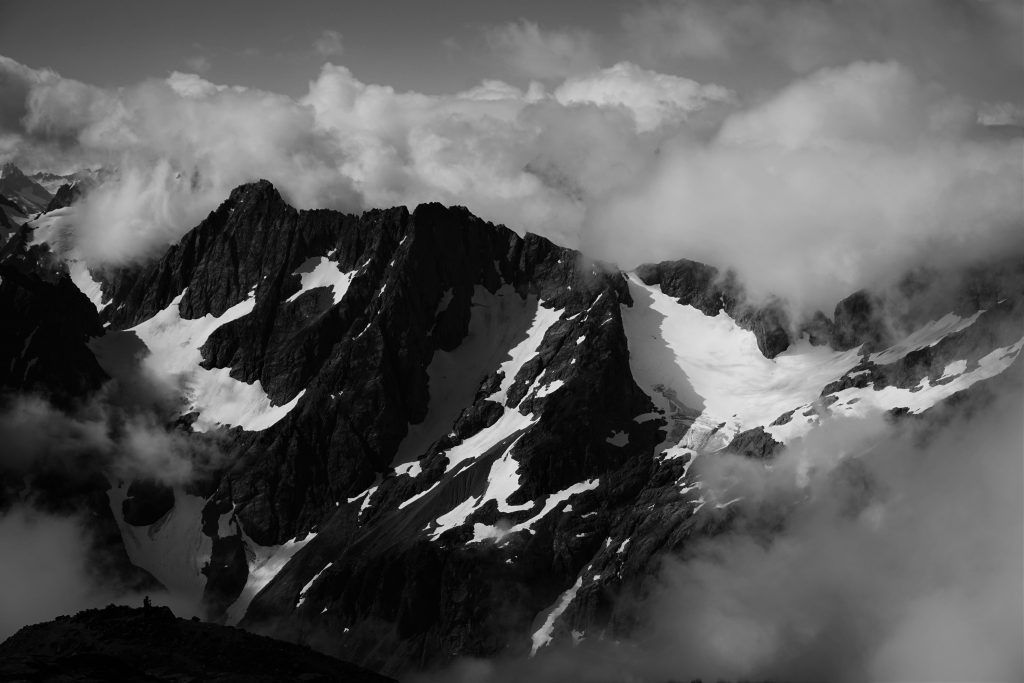 The Heart of the Cascades

Sahale Peak and Glacier Camp is renowned for its widespread views, beautiful trail, and of course, beautiful pit toilet (some say it’s the best views of any pit toilet in the country). I fell in love with the incredible scenery of the Cascade River Road back on Eldorado. The impressive vertical relief, spanning often 6000 ft and multiple botanical zones, and sharp rock ridges leading to hanging glaciers to lush alpine meadows had me entranced. Daniel and I decided to return to the area for a little day climb of Sahale.

The “mostly sunny” forecast once again proved to be “cloudy” here on the Cascade River Road. The clouds often stack up against the western edge of the Cascade Crest on days like these, but we were hopeful they would burn off by the afternoon. The switchbacks up to Cascade Pass went quickly and then we started up the Sahale Arm. It was real cold and misty in the clouds here. But soon enough, a little below the Glacier Camp, we broke out above the clouds and it was wonderful! We could so many of the Ptarmigan Traverse and Glacier Peak Wilderness to the south. It was beautiful, alpine mountains for as far as the eye could see.

Above the camp, we continued onto the Sahale “Glacier”. I guess it had a few tiny cracks, but we just stepped over them and continued on our way. We worked our way up to the right side of the base of the summit block.

The scramble worked its way up and around to the right before steepening 50 ft beneath the summit. A few class 4 moves and then an overhung juggy mantle brought us to the summit. Exhilarating!

Although the summit of Sahale has barely 50 ft of prominence over its neighbor, Boston Peak, it felt like a summit! We had incredible views through the swirling clouds around us, from the crazy Ripsaw Ridge to Buckner, a distance Bonanza Peak, and the line of the Ptarmigan Traverse to the south.

Strangely, there was a huge, but mostly eaten watermelon left on the summit! Whoever brought it up there must have carried an extra 10-20 lbs up! Good thing Sahale is an easy peak…

We had a light 30 m rope, which was not long enough to do the standard rappel, so we just opted to belay each other down through the crux downclimb, using the established rap anchors on the summit. Then we carefully did the rest of the downclimb. Luckily, no one else was climbing up while we were going down because the rock was somewhat loose.

We had a speedy time jogging down the Sahale Glacier and Arm. This time, it was actually “partly cloudy” and it was lovely hiking through the lush meadows and wildflowers on the Arm.

It was a busy afternoon at Cascade Pass, with wilderness rangers giving tours. We ran down the switchbacks towards the parking lot. Some old man asked why we were running, perhaps away from a bear? Who would think that people would run out of choice in the mountains!

This was a fun day for us in the mountains! It felt great how a climb that just a year ago may have seemed like a big deal was now just a casual day hike, taking only about 8 hours roundtrip. It goes to show what gear, training, and experience can do in these mountains!