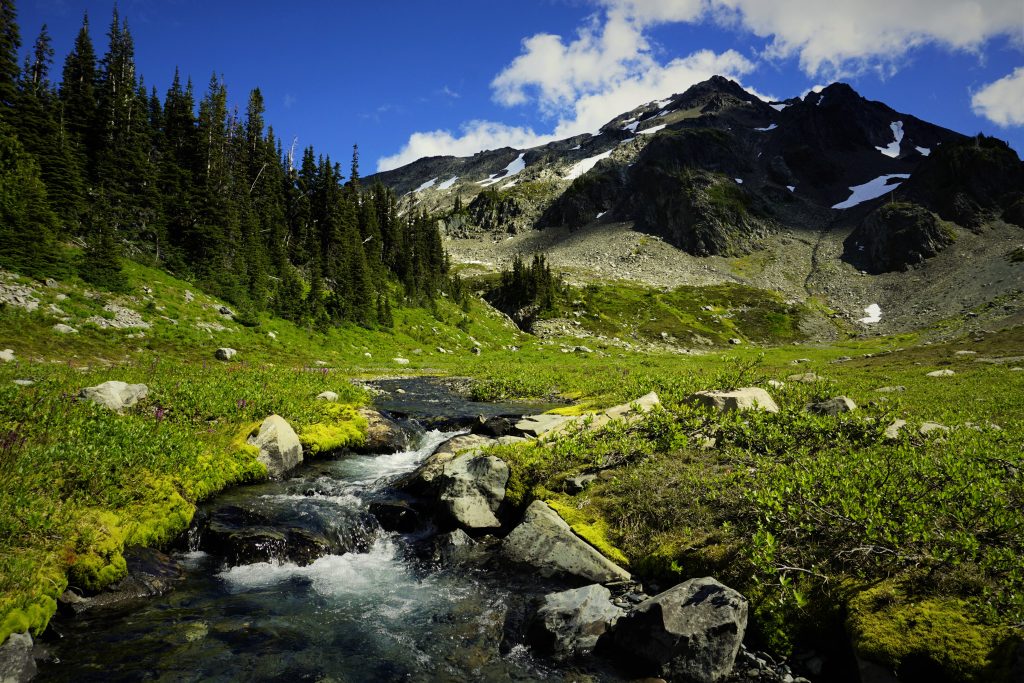 The Olympic Mountains are an often overlooked region of Washington. We have a spoil of riches here, so it is easy to go a whole year without visiting these beautiful peaks because of the wet weather, longer drive, poor accessibility, and national park permit issues. But Logan and I finally grouped up for a 3 day trip to Royal Basin in the Northeastern side of the Olympics to bag a few peaks.

We annoyingly had to drive all the way to Port Angeles to get our overnight permits, where we found Royal Basin was surprisingly taken the first night, so we subbed it for Deception Basin, a backcountry area beneath Mystery. It would actually work out better for us climbing Mystery the first day, so we were stoked.

The trail into Royal Basin is pretty easy, but you wouldn’t think you were in the Olympics looking at the barren, dry hills above. This part of the range is in the rain shadow of Olympus so is actually quite dry.

The landscape of Royal Basin was very morained but we got on some snowfields as we climbed to the notch that would lead us over into Deception Basin.

While Royal Basin was barren and rocky, Deception Basin looked like a lush alpine wonderland with silty streams flowing through open meadows! There was hardly a sign of man. We eagerly scree skied the slopes down to the valley bottom.

We pitched a tent in Deception Basin on a nice barren patch of dirt above the river. Then we set off with lighter packs to the Mystery Glacier. We walked across a big moraine at the base of the glacier. It had this dark, black sand and a big silty moraine lake.

The glacier was really chill, with just a few small cracks to step over. We did fine in our running shoes and crampons.

Once we reached the ridge, we had a good view of Constance and Inner Constance.

From there, it was a fun 4th class scramble to the summit. We had heard the rock quality in this part of the Olympics was poor, but it was not too bad! The summit was awesome. We were walled in by Deception and Constance, both bigger peaks. And Mt. Olympus stood sentinel in the distance. We could see all the major Cascade volcanoes except Adams, from Baker to St. Helens. The valleys were incredibly deep and green, even by Cascade standards.

We quickly descended Mystery in the evening light and ran down the glacier in mere minutes. Then it was back to camp for a relaxing evening in one of truly beautiful basins I have ever experienced.

We woke up the next morning and decided to take a walk through upper Deception Basin. We followed the creek up into a flat upper basin beneath Hal Foss and Fricaba Peak. There many sparkling little ponds and streams. It was a magnificent area.

Back at camp, we packed up and ascended the scree slope back to the notch leading into Royal Basin. We said goodbye to the idyllic basin and descended to a prominent moraine ridge where we found a flat campsite among some house house sized boulders. We left camp here and traveled over to the silty, turquoise moraine lakes of Royal Basin. Honestly, they were kinda ugly.

From there, we ascended the nasty moraine slopes up the side of Deception. We had heard horror stories about Deception, supposedly “the only class 2 that could kill you”. The horror stories were confirmed. It was not just loose; little movements could set off rocks above you. When we finally crested the ridge, Logan triggered a moderate rockslide that took him slowly down to the Deception Glacier. We called it “Olympic Death Choss” and were relieved when we stepped onto the snow.

We traversed on the glacier around some rock towers and onto dry slopes on the south side. From here it was just a stable class 2 scramble to the summit. This was much better than the lower section.

Mt. Deception isn’t much higher than Mystery, so we had very similar summit views as the day before.

On the way down, we seemed to find a better route down or maybe we just embraced the chossiness, but it did not seem nearly as bad. Still, the choss was super loose. Like really bad. Deception is one of the worst scrambles we’ve ever done. I’d definitely recommend it only when snow covered.

Back at camp, we had a lazy afternoon bouldering on the nearby rocks, swatting mosquitoes, and eating food.

We slept in our last morning before heading out. We tried some more boulder problems on the epic boulders near camp.

We had an easy walk out back to the car and then a long drive and ferry ride to get home. It was fun to bag the 5th and 2nd tallest peaks in the Olympics and it was certainly very different scenery that we had imagined. The climb of Mystery was excellent and Deception Basin is truly a hidden gem.