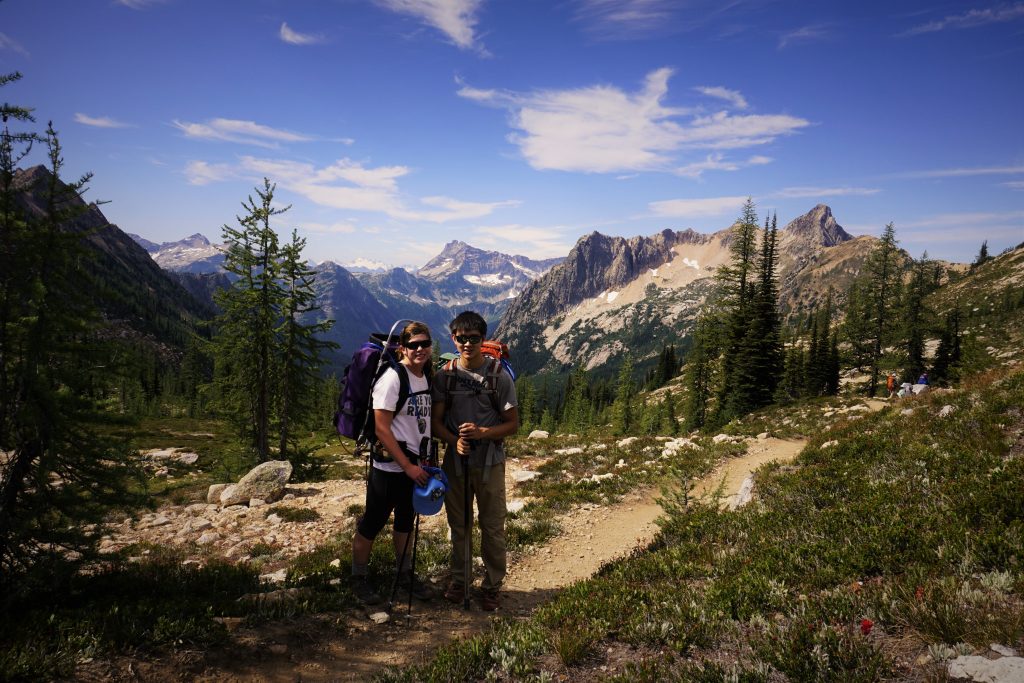 Since I visited Reno at the beginning of the summer, Kylie decided to come up to visit me in Seattle before school started at the end of the summer. I wanted to take her on a nice backpacking trip in the North Cascades and maybe an adventurous scramble or summit. Daniel and Logan did Golden Horn (and Tower in a day!) the week before and gave me the beta I needed.

The approach to Golden Horn starts with maybe 10 miles on the PCT from Rainy Pass. This section of PCT is extremely beautiful, winding its way through larch meadows and across hillsides.

We took the PCT until we were nearly beneath Tower Mountain. Here, a rougher trail branches off and climbs steeply to the Snowy Lakes. The Snowy Lakes are some beautiful, shallow lakes set high on the hillside at about 7000 ft! We got here in the early afternoon and put down our camp.

With minimal weight, we continued on towards Golden Horn. Most of the climb was just up easy, but loose scree, all the way to the actual summit block.

There was a little class 3, and then maybe 10 ft of low 5th class. I was a little hesitant soloing it in running shoes, but it was fine. I brought a short 30 m rope to belay Kylie through the crux and there we were, our first Cascade summit together!

Then we made a short rappel back down off the summit block to our gear.

The weather seemed to be moving in, with clouds pouring in from the west. It made the North Cascades seem even more intimidating and epic! The descent went very quickly since we were able to mostly just plunge step down the loose scree.

Back at camp, we had a nice dinner before enjoying a gloomy, awesome sunset.

It was quite chilly when we woke up the next morning. I left the tent and found snow flurries falling from the sky. Snow in August?! It was only fitting for Kylie’s first trip in the North Cascades…

We packed up camp and had a nice easy hike back out on the PCT. The weather improved to a nice day. I hope your first Cascade experience was a good one, Kylie!