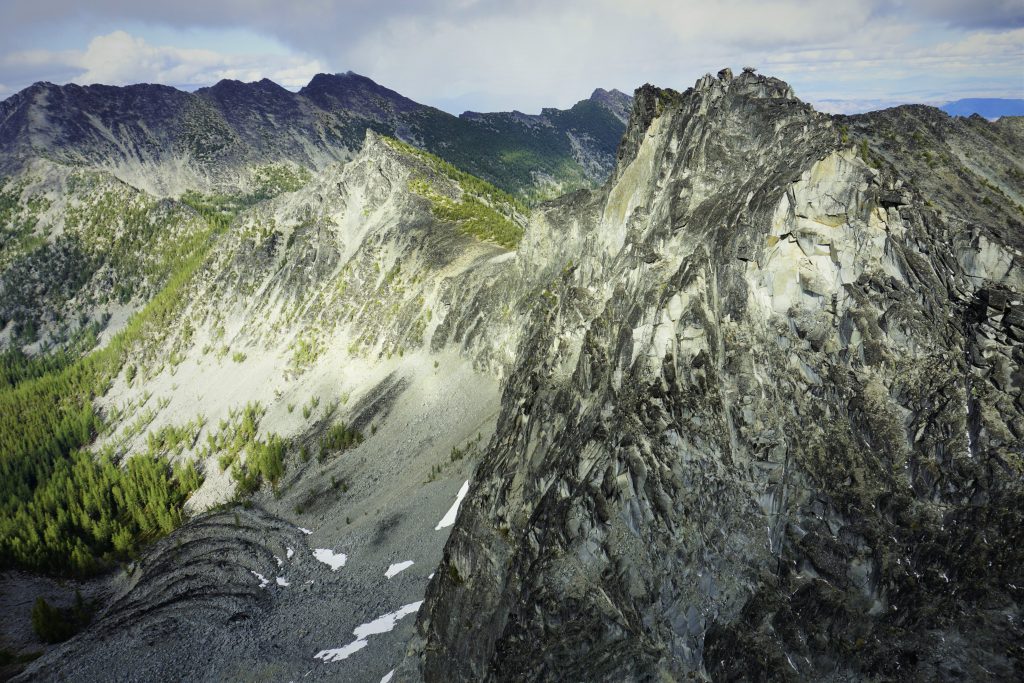 Alone on the Ridge

During my junior year at Gonzaga University, my parents let me take the old minivan. I made it a priority to get out and explore the eastern half of the state, and that included the Sawtooth mountains on the eastern edge of the Cascades. So for the first three day weekend of the year, I decided to do a quick overnighter, traversing the ridgeline between Switchback, Martin, Cheops, and Bigelow peaks.

The drive out to Sawtooth was tough in the early morning darkness by myself, but I was excited by the time I pulled into the parking lot at the Crater Creek Trailhead. The mountains were so bare here, covered mostly in sparse pines and sagebrush in the lower hills. It was a cool morning for early September and I hiked quickly to Cooney Lake. It was interesting that mountain bikes and dirtbikes were allowed on these trails, but it did not bother me.

The weather seemed to be holding up okay considering the 20% chance of snow showers as I ascended the southeast ridge of Switchback. Here, I got a good vantage of the full traverse ahead.

The weather got cooler and some snow flurries started coming down. The backside of Switchback had ice covering the rocks, spicing up the scramble a little. Most the ridge leading north off Switchback was pretty easy, with a few more exposed sections of class 3. Next, the climb up Martin was a walk in the park.

I continued on to Cheops, although you could definitely skip Cheops and head straight to the notch on the west ridge of Cheops. After summitting Cheops, I descended towards this notch through loose scree and then found a rough boot pack down to Boiling Lake, which really was not that attractive.

The south ridge of Bigelow seemed pretty long, so I opted to skip the ridge traverse for a little and travel cross country into the basin to the southwest of Bigelow. I thought about camping here since I was most of the way through the traverse, but it was only like 2 or 3 in the afternoon so I figured I might as well summit Bigelow and then come back down and camp.

The climb up the SW side of Bigelow was easy class 2, but annoyingly loose and long. It really started dumping wet snow and hail on me at this point and I really began to question everything. It was my first time doing a trip this big solo and I had to dig deeper to find the motivation to continue through the suffering. A few hundred feet short of the summit, the snow stopped and the sun came out, shining on the thin layer of snow everywhere. It was magical.

Originally, I was planning on descending back down the SW side of Bigelow since it is less steep, and back over Horsehead Pass. However, looking down the east side, it seemed like there was a gully that would lead me down onto the east face, which I could take down to Upper Eagle Lake. This would be a much shorter descent. I did not know much about this route, but it looked plausible so I decided to check it out, promising myself I would not do anything harder than class 3.

The gully was a little steep and exposed at first, but it led me to easier talus slopes. Above, I looked up at the steep cliffs beneath Bigelow and wondered about rock routes up the cracks.

Lower down, I found my way through some cliff bands and down to the lake. It was only 5 pm or so and I realized that I could make it out to the car by darkness if I wanted. But then I would have to drive 3.5 hours in the dark by myself and I hauled the overnight gear the whole way, so I decided just to settle down and enjoy the cool evening at Upper Eagle Lake.

I crawled underneath my tarp tent right as hail started to come down and I fell asleep to the sound of hail droplets.

The next morning was chilly, below freezing, but I awoke to a amazing morning glow on the cirque of the lake.

It was only 2 hours or so of fast hiking back to the car, and then the drive back to Spokane! Junior year was off to a good start.

This was one of the first big solo trips I did and I really enjoyed it. It was an appropriate objective with a large amount of off trail scrambling but easy bail options. Without the motivation of another partner, I found more drive internally and from the beautiful mountains around me. And like always, the weather tested me and treated me, making the experience that much more meaningful in the long run.