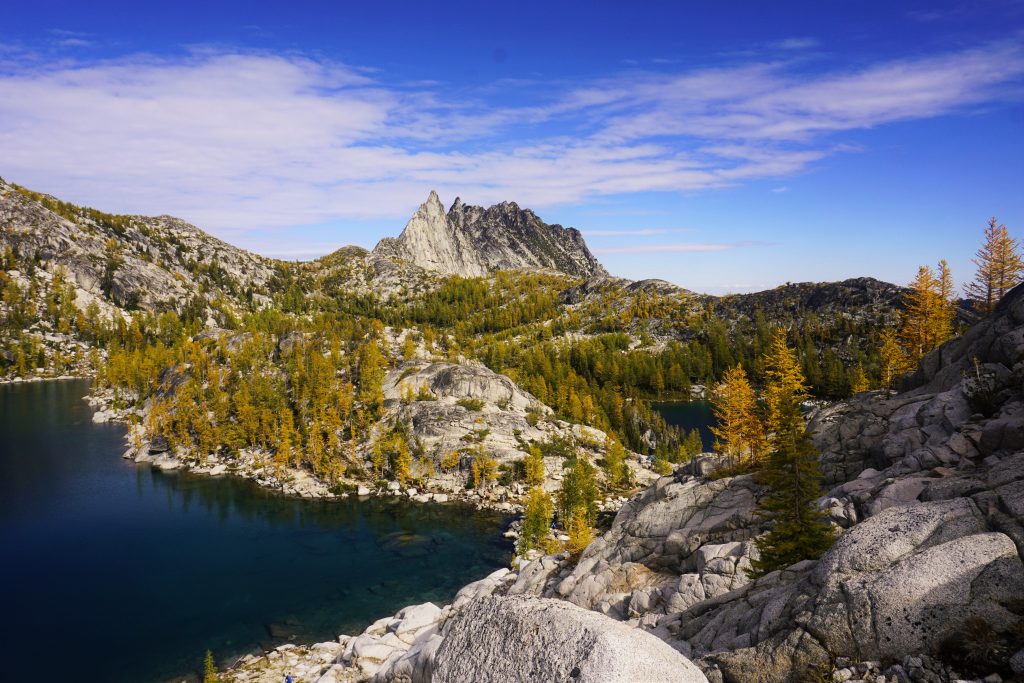 For an early birthday weekend, I wanted to take Kylie into the Enchantments for the first time and experience the fall larches. I had been into the core zone quite a few times, but actually had never done the traditional thru-hike (I had done it backwards). Later in the week, we found out that some friends were looking to do the same thing, so we organized a car shuttle with them, making for easy transportation.

It was a cold fall morning. Sometimes I forget how little daylight there is this time of year, but it was still shaded when we reached Colchuck Lake.

There were huge swarms of people as we contoured around the lake and started crossing the boulders. I think a group of like 20 trail runners passed us!

Then we began the long grind up Aasgard. Up high, there were even a few water ice sections from the streams that had frozen overnight! We also started to enter larch territory. They were obviously not fully yellow, but pretty close.

When we crested Aasgard and entered the upper core zone, we finally got into the sun and were able to warm up. It was a beautiful fall day up here, cool and crisp.

A few of us decided to hike up Little Annapurna, while others chilled at a nice spot near the lakes. Up near the top, there was actually a bit of fresh snow, but nothing that made the hiking difficult or anything.

Reunited with the rest of the group, we kept hiking through the core zone. As we got lower, the larches got more abundant and the scenery just kept improving! Prusik Peak went from being a little high point on a ridge to a majestic spire.

Once we got down to Lake Viviane, the magical section was over and we began the long slog out the Snow Creek Valley. The Snow Lakes were super low and kind of ugly actually. We got down to the car right as it was getting dark, tired but happy with a beautiful hike through the Enchantments!