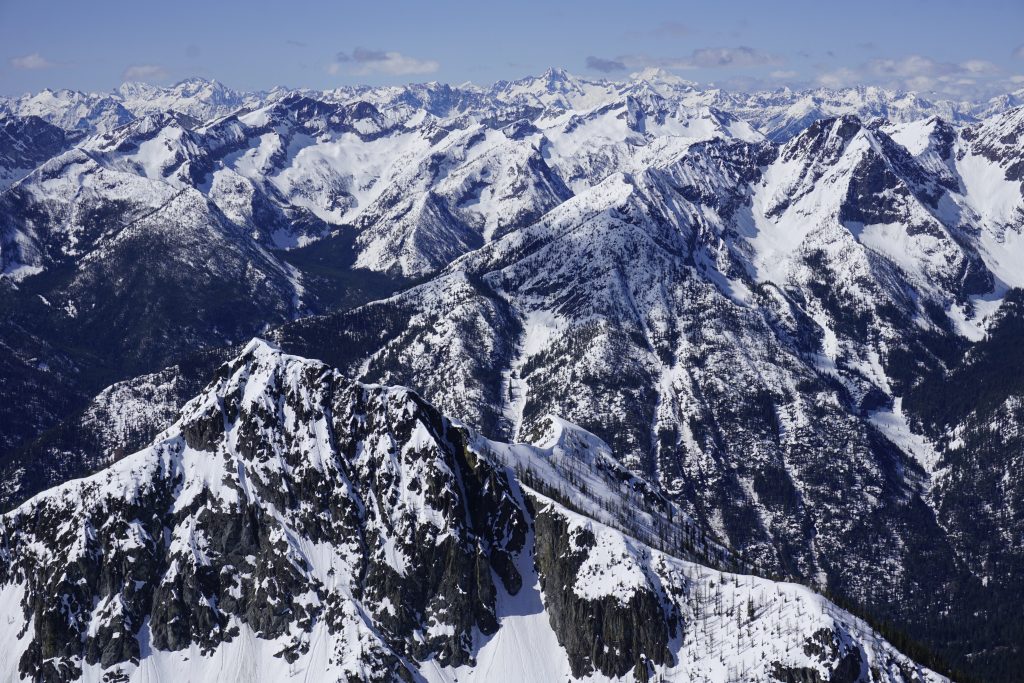 When a good weather windows arrives, you cannot just stay inside. Even if it is the weekend before finals. So with sunny skies forecast for the Eastern Cascades, I decided to take a study break, driving by myself Saturday afternoon to the Twisp River Road for a Sunday climb of Abernathy.

Spring was in full bloom in the beautiful Twisp River Valley, but snow lingered not far above. I drove the van until a washout about 2 miles from the Scatter Lake Trailhead. A 4×4 could have plowed through the flowing stream, but this was too much for the minivan. I initially tried sleeping in the back set of the van, but eventually decided to inflate an air mattress and sleep on the ground outside. It was a cold, clear night below freezing.

I woke up at first light and quickly hiked along the road in the frozen morning air. The trail went quickly as it was snow free to probably 4500 ft. Above there, it was firm snow, easy for booting. It seemed like I may not need the snowshoes I was carrying along. Beneath the lake, the slopes were more open, but I had little trouble finding my way up to Scatter Lake.

Scatter Lake was pretty, with larches along the shore. From there, I walked across the frozen lake and directly up 35 degree slopes to the summit. I never once even needed to pull out my ice ax, snowshoes, or crampons. Training weight.

The climb had taken only 5 hours, including the time walking along the road. It all went much smoother than I expected. The sun was out and warming everything nicely as I gazed across snow covered peaks as far as the eye could see. It was a magnificent summit. From the jagged Washington Pass spires to the distant rolling Pasayten to the dense Glacier Peak Wilderness, mountains stretched as far as the eye could see. The vastness of the North Cascades was on full display.

I set the camera on some rocks and got some timer photos of myself.

The snow had softened on my way down, making for easy plunge stepping and relatively little post holing. I got back to my car in the early afternoon, plenty early for the 3.5 hour drive back to Spokane. It was a long drive, but certainly worth it and just what I needed after some busy weeks at school! Once again, the Sawtooth never fails to provide solitude, beauty, and incredible views of the Cascades from an angle I am not as quite used to.