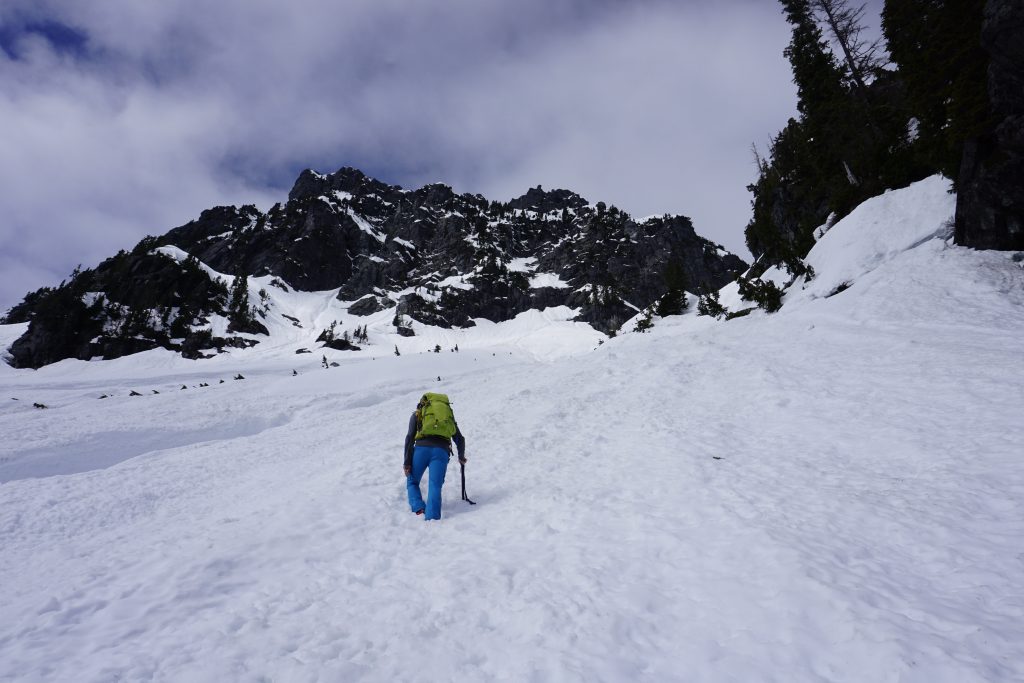 Mt. Index is one of the most visibly impressive, if not the most impressive, peak from a road in Washington. It towers over 5000 ft above US2 and has two of the three steepest faces in the state. Long ago, in my youth (only 3 years ago), I made a failed attempt on it traversing from Persis, losing my glasses along the way. Now, with the road to Persis closed, that route is impractical. Enter the Hourglass Gully.

Logan and I had read about this adventurous route, which started gently enough up the Lake Serene trail before entering full on Cascade gnar. It was a warm morning on the way up to Lake Serene, which I have been to many times. As a climber now, I had new appreciation staring up at the massive peaks of Index and even the lower Norwegian Buttresses.

As we scrambled around on boulders and old snow around the right side of Lake Serene, we passed massive avalanche debris like I had never seen before. Some chunks of ice were 20-30 feet tall and melting slowly. The power of the avalanches that came off these faces was humbling. We climbed easy snow to the saddle at the far end of the lake. Now, the real fun began.

The next 1000 ft up the ridge or so was supposedly the crux of the route, marked by steep, dense brush, and intermittent cliffs. The snow cover undoubtedly helped us some, but we still had to thwack our way up at times. At one particularly tenuous fourth class move, I used my ice ax to hook a rap sling above and pull up. Quite randomly, there were near vertical snow steps 10 feet tall. More than once I had to pull myself up on tree trunks. After clearing the section, we rated it as low 5th class tree, an new Cascade grading system honoring its vertical brush.

At the top of the ridge, we traversed into the Hourglass Gully. It was shaped like its name suggests, constricting up high before finally opening up again. The avalanche paths were huge, with runnels carrying loose wet snow 3 to 4 feet deep. The snow was a little softer than we wanted, but fortunately clouds were keeping down the solar radiation.

The constriction was merely 45 degree snow but apparently later season it becomes 5th class rock. At the top of the gully, we gained the summit ridge and it was an easy walk to the top from there.

Unsurprisingly, there were no footprints in the snow up high and no evidence of anyone being up there recently. Despite its proximity to the highway, Index is not often climbed because its rugged nature and vertical gain. While the peak is a shade under 6000 ft, we did over 6000 ft of gain to get to the summit!

We were able to boot ski pretty fast down the Hourglass Gully, kicking off only small wet loose slides. We got back down to the forested ridge in the mid afternoon.

For our descent through the forest, we brought two 30 m ropes and decided to make a few rappels through the tougher sections, taking advantage of the abundant rap slings. Miraculously, we had no issues finding successive rap anchors and the ropes never got stuck on the pulls! It was pretty hilarious to rap through a forest like this, only in the Cascades… I think we did two or three rappels before downclimbing some more steep snow back to the saddle. From there, it was the long traverse around the lake and the popular hiking trail back out to the car!