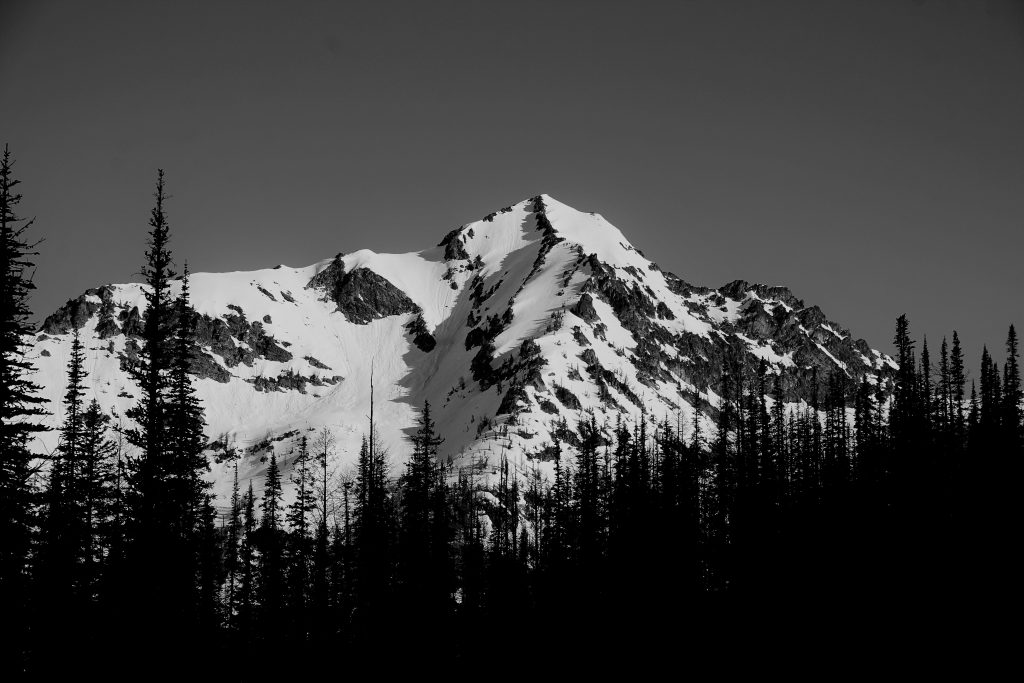 For Memorial Day Weekend, Kylie and I wanted to take advantage of good weather and 3 days off to travel somewhere a little further away. We decided to check out Saska, Emerald, and Cardinal Peaks of the Chelan Mountain off the Entiat River Road. We knew it was a long approach, but thought it would provide some fun snow climbing and scrambling.

The last 5 miles of the road to the trailhead was closed, so we had to hike the road for a while. There were some blowdowns from the fire the year before and a few washouts, but it really was not too bad. It felt like summer down here, but there was lots of snow on the peaks above us.

We switched from trail runners to mountaineering boots about a mile or two past the actual trailhead. Then it was a long day of hiking with heavy packs through a snowy forest, doing our best to stay on the trail. Kylie did a great job hiking on all the snow. We eventually reached a nice meadow around 6800 ft beneath Cardinal Peak in the late afternoon and set up camp there.

The next day, we woke up and early. We were hoping to bag Saska, Emerald and Cardinal, in that order. The peaks were all pretty close together, but there was a lot of vertical and scrambling between them.

We traversed around the basin and then ascended snow slopes to Saska peak. The snow was already getting a little mushy in the morning sun, but we made pretty good time up to the south ridge. Once on the ridge, there was some fun class 3 scrambling on a knife edged ridge! Kylie handled it like a champ.

The summit was beautiful, right on the edge of the heart of the Glacier Peak Wilderness. We were likely the only people out there for many miles.

We descended straight down the steep snowfields underneath Saska. It was descents like this and others on this trip that made us realize we needed to start backcountry skiing soon!

Once back down in the basin, we traversed over to Emerald Peak and began climbing up moderate snow slopes. Saska Peak looked really intense from this angle, with avalanches coming off the east face.

The scramble up Emerald had more dry rock than Saska, but was pretty easy and not too loose. We got to the summit in the mid afternoon, a little tired but happy with our progress.

We hurried down to the base and Cardinal Peak and decided to give it a go, even though it was a little late in the day.

I made a staircase of steps up the snowfield to the scramble. There were a few interesting, thought-provoking slab moves in our mountaineering boots, but we got through it and reached the summit in the evening. The light was soft out of the west and we could stare straight down 7000 ft to Lake Chelan. It was a beautiful moment with a beautiful girl.

We ran down the snowfield and barely made it to camp before it got dark. We were exhausted, but proud of what we accomplished during the day.

The next day, we just reversed the whole hike in, although at least it went a little faster. With the 4 hour drive back to Seattle, it truly felt like a full day just to get in and then leave this marvelous place.

The three peaks we climbed were nothing exceptional, but definitely a challenge on foot this time of year. If you are looking for a true wilderness experience, the Chelan Mountains can provide that because they are far away from civilization and have long approaches, especially with the closed road.