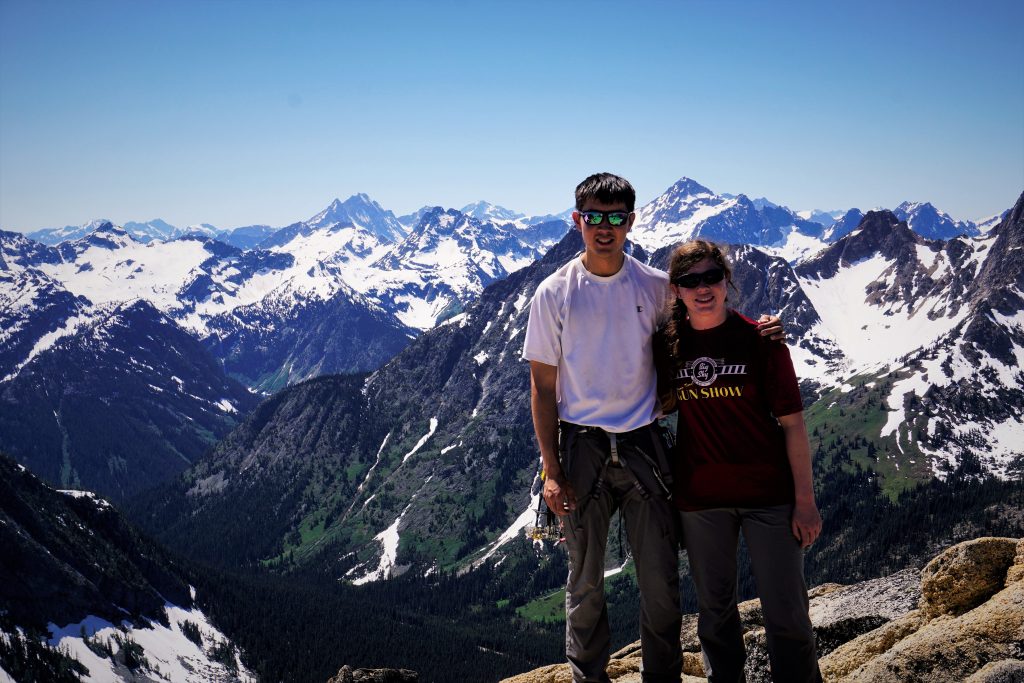 A Rite of Passage

When I started climbing trad in the spring, my goal was to be able to lead the Beckey Route on Liberty Bell by the end of the summer. Well, the opportunity rolled around and Zeos, Daniel, Kylie and I headed up to Washington Pass on a fine summer weekend to climb the classic beginner alpine rock route in all of Washington. Some could say it is a rite of passage for the Washington alpine rock climber. It would be our first alpine rock climb.

The climber’s trail up to the base was still snow covered, leading to some fun slab traverses and annoying kick stepping, but we made it up there without getting hit by any rocks down the gully, the most important part. Unfortunately, we were the second group at the base of the climb, so we took our time getting ready. There were goats blocking the start of the route, lapping up climber pee.

It was a party of three climbing ahead of us and they must have been even more beginner than us, because they took about 2 hours to complete the first pitch, which was an easy 5.0 pitch through a fun tunnel. When it was my turn to climb, I think I placed 3 pieces of gear the entire pitch, it was that easy. Finally, Daniel and Zeos climbed it and Kylie and I joined them at the crowded belay station.

We waited maybe another full hour before Zeos and Daniel were able to climb the second pitch. It was ridiculous! The traffic jam extended maybe four parties behind us on this popular route; the last group would be lucky if they got back to the car before dark. We quickly realized that one liter of water and no sunscreen was a poor choice, despite the short length of this route. We were going to get fried.

The second pitch was probably the hardest (but still easy), with a sustained chimney. It was really fun and Daniel got some great photos of me from above.

The third pitch had a cool traverse out to the right before ending at lower angle terrain. Technically, this was the end of the route, but there was still a 5.5-5.7 slab boulder problem blocking the otherwise easy trail to the top! It was 5.5 for 6 foot people like me, Daniel, and Zeos, but definitely 5.7 for Kylie as she struggled to reach the key handhold!

The summit had great 360 views around the Washington Pass area, south into the heart of the North Cascades, and north in the Pasayten Wilderness.

Meanwhile, Zeos and Daniel showed off their ability to fit cams in their mouths. Daniel could get in a 0.75, but Zeos could swallow a #2! Incredible!

We put a handline going back down the slab and made two rappels back into the Beckey Gully. I think we spent something ridiculous like 6 hours on route because of the super slow party of three an at least an hour waiting for them at the start! We downed a ton of water and started hiking out through the mushy snowfields, post holing many times. But it went quickly back to the car.

All in all, it was a super fun, relaxing day in the alpine! For Kylie and I, the climb definitely felt anti-climatic as our first alpine rock climb. It felt relatively easy and straightforward, not like we were warned alpine rock climbing is. We probably brought way too much gear also (a single rack is sufficient), but it is always better to be over-prepared! Still a great route to a great summit with awesome friends!