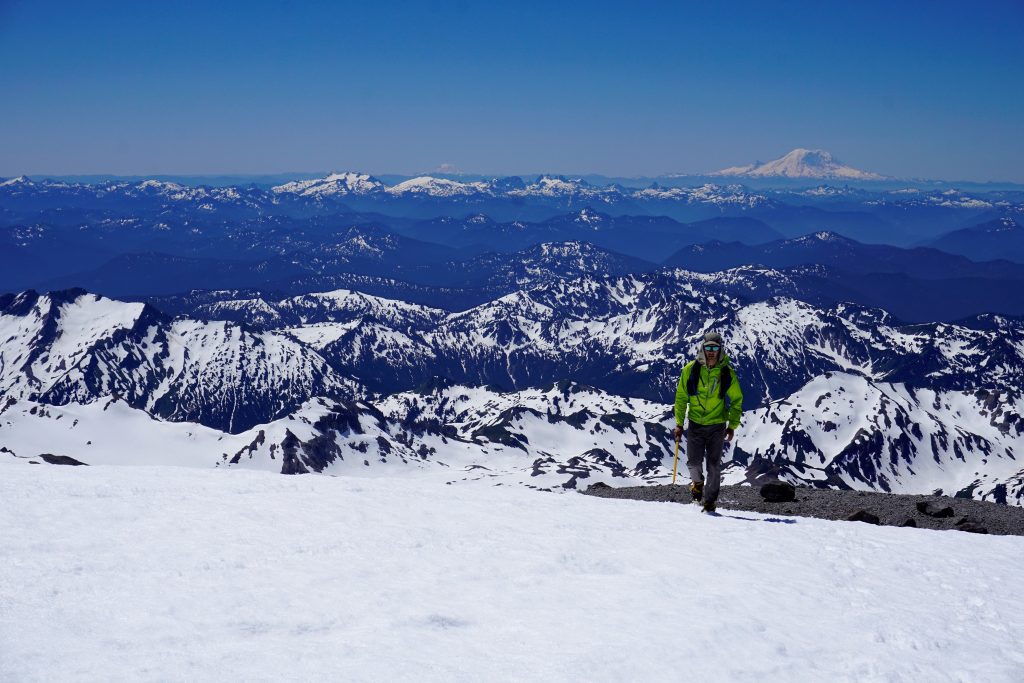 My Favorite Peak in 16 Hours

For multiple years now, I have wanted little more than to visit Glacier’s Peaks lofty summit. Its heavenly meadows and sprawling glaciers called to me from distant viewpoints, but because of the time commitment (3-4 days usually) needed to climb it, I never made an attempt. I began to realize that if I wanted to climb it, maybe the easiest way would be to just do it in one go. It is only 36 miles and 12,000 ft gain; with a light pack and rested body, surely I could do it in under 24 hours, right? I just needed a partner crazy enough to join me…

I do not really remember when I first mentioned running Glacier Peak in a day to Daniel, but it was probably just in passing. Nonetheless, when I returned home at the end of my junior year of college, Daniel could talk about nothing other than Glacier Peak in a day. The running bug got him. Since he had climbed it before, he felt like early to mid July would be the perfect time to do it. With a good weather forecast, we decided to go for it.

I did not sleep much and Daniel picked me up around midnight, arriving at the trailhead around 2 am. Our goal was to get to White Pass right around sunset so we could do all the off trail travel in the light but still give us maximum daylight hours in the high country. So in the dark, we strapped on headlamps and began running through the old growth North Fork Sauk River Trail. The trees were huge, disappearing into the darkness beyond the penetration of our headlamps.

After the first 6 miles of meandering river trail, we began switch backing up the hillside. Slowly, it began to get light, although there was some low lying fog. We crossed a few small remaining snowfields right before White Pass. We hit White Pass exactly three hours in and the sun was just starting to come out. Wildflowers were blooming and the meadows were lush green.

Beyond White Pass, we left the trail and climbed up the grassy ridge to the north. After some steep slopes, we crested the ridge and got our first view of the sprawling Whitechuck Basin. It was incredible.

We dropped down steeply, then back up. Eventually we got onto the main part of the Whitechuck Glacial moraine. This was one of the wildest places I had ever been. The basin was miles wide and covered in foreign looking boulders and rock features. I felt completely walled in, a world away from the blossoming organic fields of flowers back at White Pass.

We left the magical Whitechuck Basin and began a short climb to Glacier Gap, the normal advanced camp for people summitting. It took us 6 hours to this point, so we were super excited with our progress! We were on pace for much faster than 12 hours just to the summit!

Past Glacier Gap, we passed a few parties either on their way to or back from the summit. They were mostly confused by two boys running by with matching running packs and funky waterproof running shoes. Some were quite amazed we had started at the car that morning, but then they dismissed it as the abilities of our “special shoes” (La Sportiva Crossover 2.0 GTX). Pretty sure La Sportiva should be sponsoring us!

We brought helmets to give us the option of scrambling over Disappointment Peak and avoiding the crevasse hazards, but we decided to go on the glaciers instead. There were a few small crevasses showing at the connection between the Gerdine and Cool Glaciers, but we were able to just carefully step over them.

During the final 500 ft climb to the summit, I think both of us started to really feel the altitude and all the elevation gain of the day! We crested the summit at almost exactly 9 hours, way ahead of where we ever expected to be! We were super happy with our progress.

The summit views from Glacier Peak were every bit as wonderful as I had dreamed. We could see nearly all the Cascades, from the southern volcanoes of Mt. St. Helens, Rainier, and Adams, to the spine of the Stuart Range, the broad profiles of the Alpine Lakes Peaks, the high profiles of the Entiat Range to the east, the commanding Monte Cristo and Sloan Peaks, the magical Ptarmigan Traverse Peaks, and the snowy giants up north like Baker and Shuksan. It was mountains and nothing but mountains for as far as the eye could see. We could look down at the distant valley we started at that morning; it was impressive how far our two feet could carry us.

We had the summit completely to ourselves for a good hour before departing and starting our long journey back. We had a blast running down the glaciers, slipping and sliding at a high speed. One group even compared us to Killian Jornet, the world’s best mountain ultra-runner! It was quite a complement! We made it back to Glacier Gap in just one hour, three times faster than the way up.

We took our time on the return trip through the Whitechuck Basin, marveling at the lunar terrain and drinking from fresh glacial melt. When it finally came time for one last climb out of the basin and say goodbye to Glacier Peak, we were ready to move on.

Back at White Pass, we took an extended break in the afternoon sun, drying our feet out. One guy passed us on the way up and recognized we were running it in a day. Turns out he had run it solo in a day a month earlier and was back to ski it (seems like the wrong order of things based on the season…). His name was Anthony and he was biking from Canada to Mexico, skiing and running ultra prominent peaks along the way. Badass! This wouldn’t be the last I would see or hear of Anthony…

The descent back to the river valley was hot and dusty and our bodies were wearing down with over 10,000 ft of descent at that point. Back in the forest, it seemed as if the brush had grown substantially, covering the trail and making everything humid. Daniel and I were doing quite well, still mostly jogging when we both absolutely hit a wall with about three miles left. We were forced to walk and struggled back to the car, reaching it at a little over 16 hours roundtrip.

Overall, this was the most incredible day trip I have ever done! Some people asked us why we had to rush the experience of such a scenic peak instead of “enjoying it” over a few days. I have always felt that doing something quickly does not preclude me from enjoying the experience; rather, it often enhances the scenery because it makes me acutely aware of the diversity of scenery and transience of the moment as I pass through time and space so quickly. In just 16 hours, I passed through old growth forest, lush alpine meadows, sprawling glacial moraine, and a lofty volcanic summit – and back again. It felt like a the journey of a lifetime in a whirlwind of a day. I would not have had my favorite peak any other way.

6 thoughts on “Glacier Peak in a Day”