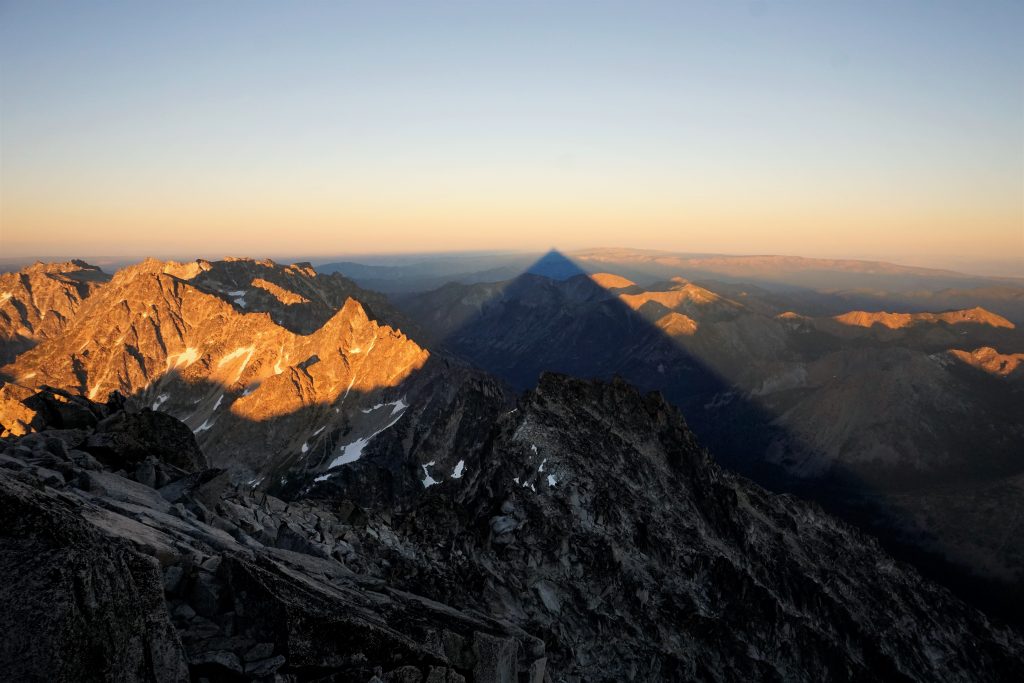 Kylie and I had one more weekend together here in Washington for the summer, so we decided to go big. Over the summer, we had been building up, climbing classic trad routes like the Beckey route on Liberty Bell, Midway on Castle Rock, and the South Face of the Tooth. We felt like a carryover climb of the West Ridge of Stuart and the West Ridge of Sherpa would be a great final climb of the summer, a step up not necessarily in difficulty but in length and adventure.

We woke up early Saturday morning and drove as close as we could to the Lake Ingalls Trailhead and walked the remainder of the road that had been mysteriously closed all summer. At Lake Ingalls, we packed full each with 3+ liters of water, as we knew there would be possibly no running water for the next day or more. Mt. Stuart loomed in front of us. This is one of the logistical challenges posed by Stuart: carry more water and you’ll move slower and just need more water. Carry a stove to melt snow and that’ll slow you down also. There is no good way to do it.

Kylie was not feeling too good after minimal sleep the night before and I was loaded down with overnight gear, rope and rack, and 10 lbs of water, so we were moving pretty slowly and started up the first gully on the route a little later than we expected. The first gully was epic, with steep granite walls encompassing us. They seemed to grow taller and tighter as we climbed. As we scrambled up, we passed rap slings and bivy spots. It was kind of eerie, like a bad omen of what could happen to us if we did not keep moving.

After exiting the first gully, we crossed a small snowfield. It was mid afternoon and the snow was soft, making for an easy crossing.

Next, we had the climb to the notch by Long John Tower. Here, it was supposedly easy to get into fifth class. I scrambled up through the hardest parts, trailing a rope and gave Kylie a quick hip belay up. Then we cruised up to the notch. We had covered most of the vertical of the route already, but the true difficulties were still to come.

This section between Long John Tower and the West Ridge Notch was supposedly the most confusing part of the route and was often where people got benighted. This route has a reputation for turning into epics for less experienced climbers like us because of its length and complexity. The wonderful sandy, protected bivy sites every 100 feet serve as a testament.

We had some pretty specific instructions from the internet, like “go down the gully 100 feet before climbing the chimney up to the left. Climb through the tunnel underfoot and you will see ‘God’s Cairn’. Go towards it” or some mysterious riddle like that. Turns out it was not that simple. I tried maybe four different fourth class chimneys, downclimbing each time because I was not sure if it was correct. I was getting tired scrambling with a heavy pack and it was getting later in the early evening.

Eventually, I decided to pursue one of the chimneys further. We found our way through the low 5th class scrambling (still in our approach shoes) and then suddenly found a tunnel through to another notch. We were on route! After unlocking this key, we traversed some more ledges and scrambled up to the West Ridge Notch. It was getting late!

At this point, we we worried we would not even make it to the summit before nightfall, as we still supposedly had all the technical pitches ahead of us. But because of the abundance of bivy sites, we decided to don our rock shoes and continue on. I also made a radical decision and decided to disregard the beta and trust my route finding instincts. Suddenly, we were moving much faster, scrambling up easy fourth class terrain back and forth along the ridge. I do not know if it was the shoes or mental, but the climbing here actually felt easier than the previous section.

Eventually, we came upon a ledge where more substantial fifth class moves were required to go further. There seemed to be two reasonable options, and so we broke out the rope and rack and I started up the left option. It turned into a short overhanging 5.9 dihedral, which I somehow pulled even with a 30 lb pack. I continued up until I ran out of rope and belayed Kylie up. She made some progress, but then the rope became heavy and she stopped making progress for a while. It was so windy I could not communicate to her, but I figured she had gotten stuck at the dihedral, so I lowered her back down and then scrambled and rappelled back down to her.

Back at the ledge, we were running out of daylight but decided to try the right variation. I led a 30 m pitch through balancy low 5th class terrain. Kylie quickly followed and we were moving fast. I led out on another pitch and encountered a splitter 5.6 looking hand crack maybe 20 ft long with a piton halfway that led towards the summit. I took a deep breath and looked up at the crack. Crack climbing has been my nemesis for months. But I thought back to all those days at Husky Rock, climbing those slick awful cracks until my hands bled. I thought about the overhung hand crack at the Wild Walls climbing gym, and all the struggles there. And then I sent it. It was one of the most sublime moments I have ever had climbing. I channeled all the frustration I have had with crack climbing into my hand jams, securely cruising up the crack like it was nothing. All the suffering had been worth it! And when I topped out, I found I was truly right below the summit!

Kylie crushed it on follow and we hurried up to the true summit just as the sun was setting. It was windy, colorful, and epic! Stuart felt so huge, almost like a volcano in terms of prominence.

We found a bivy spot and bivy cave about 20 ft beneath the summit and began to set up our sleeping pads there for the night. At last light, I snuck back up to the summit for a few last photos. It was magical.

We had read about the snafflehounds, these large rats that inhabit the bivy sites of Stuart. They like to go after your food, so I left our food inches from my face in hope they would wake me up and I could scare them away. I slept undisturbed through the night but when I woke up, our food bags and first aid kit had been chewed through! We got snaffled!

The food loss was not a big loss because at this point, we did not have that much water left so our appetites were small. We managed to eat some food and then packed up.

We stayed too high going around the false summit and ran into a steep snowfield traverse without proper gear. After an inadvertent slide, we backtracked around the false summit and crossed lower down. At this point, we had the option of descending the Cascadian Couloir or continuing to Sherpa. We were tired, behind schedule, and almost out of water, but we decided to go after Sherpa anyways.

The traverse to Sherpa was more difficult than we expected, with lots of loose sidehilling, a rappel, and lots of ups and downs. We arrived at the base of the West Ridge of Sherpa around noon, much later than we had wanted.

Kylie led the first few simul pitches, climbing up to the upper ridge. Once climbing, we both felt better about our decision and were enjoying it. At the base of the steep section, I went right of the obvious cave, as I had remembered from the beta (apparently you were actually supposed to go left, that way it stays only 5.5). This put me into a fun techy 5.7 corner, the best climbing of the whole day. Kylie led a short pitch and then I led one last short pitch to the exposed summit.

Because of the broken up, wandering nature of the route, rappelling and downclimbing took nearly as long as climbing it. The rappel stations were not obvious, but we were careful spotting them on the way up. We got back to the base of the route around 5 or 6 pm. At this point in the day, we had consumed hardly any food or water.

The boulder field beneath Sherpa was long and tiring. Towards the bottom, we could hear water rushing deep beneath the massive boulders, but could not get to it. It was torture. Eventually, we got to an exposed stream where we could get water. We spent 30 minutes just bathing and drinking like wildebeest at a watering hole in the desert.

Lower down on Sherpa, we found a climber’s trail that took us through the brushy sections down to Ingalls creek. We walked up valley, crossed the creek and began the exhausting climb back up to Longs Pass. The sun set on us and Longs Pass seemed to disappear in front of us in the fading light. It was truly a Long climb and we reached the pass around 10 pm just as the last bit of light disappeared. Kylie’s phone had just enough battery to give my parents a second long call to let them know we were okay.

The last 4 or 5 miles back to car were full on zombie mode and we got home around 2 am, almost 48 hours after leaving!

We learned a lot on this climb. We learned about moving efficiently on big routes, route finding, and managing weight on carryover climbs. Despite its trials and discomforts, this still ranks as one of my favorite weekends ever because of the incredible scenery, climbing, and of course, partner. Thanks for being so strong, Kylie!