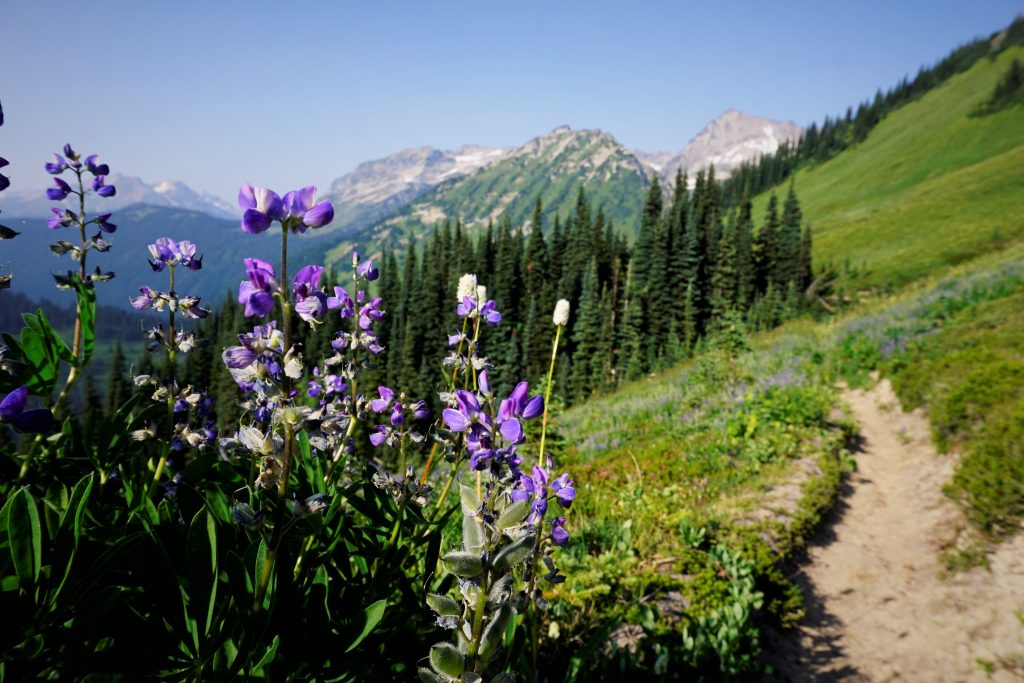 If you have read many of my posts, you will understand I have a strong, strange fascination with the Glacier Peak Wilderness. To me, it just has the most beautiful trails, combining rugged glaciated peaks with lovely wildflower meadows and meandering streams. Years ago, I “discovered” the Spider Gap to Buck Creek Pass loop and had wanted to backpack it with my family ever since. Availability and fires stalled it for a few years, but this year we decided to go for it, even with a little smoke in the forecast.

There is a short car shuttle involved on this loop, and I solved it with my standard strategy of just running the road. We took the van up the potholed road to the Phelps Creek trailhead, dropped off Baba and Sara with the gear and then I drove back to the Buck Creek trailhead. It took only 30 minutes or so to run the road and we were on our way.

The trail is a little boring before reaching Spider Meadows, where it opens up into one of the deepest, most beautiful valleys in the Cascades.

The climb towards Spider Gap was long but very scenic. There was a nice watering hole partway up to get some fresh glacial melt before beginning up the small Spider “Glacier”. It is really just a deep south facing gash holding this permanent snowfield.

At Spider Gap, we laid eyes on the marvelous Lyman Lakes. They are a chain of large milky blue glacial recession lakes that meander just a few feet down at a time. They are also apparently a mosquito heaven.

The snowfield on the other side was soft and fun to walk down. Walking around the Lyman Lakes felt like a different world, wandering between perfect turquoise lakes.

After passing all the lakes, we crossed a creek on a footbridge and began our final ascent of the day to Cloudy Pass. We were all getting tired at this point, but quickly enough we broke out of the trees and entered the serene Cloudy Pass meadows. Since we knew there would be no water at the pass, we filled up here.

Unfortunately, the prime camp spot at the pass was already taken, so we settled on some semi-flat spots a little bit beneath the pass. We then had a relaxing evening and took in the evening light, even though the smoke created a little haze. The mosquitoes were pretty annoying, but not awful.

The next morning we packed up and hiked over Suiattle Pass and down towards the Suiattle valley floor on the PCT. Along the way, we passed a mother with her son who had down syndrome. They hike a section of the PCT together each summer. Later on, there was a nice view of Glacier Peak before plunging to the valley floor.

When we turned off to the Middle Ridge trail, the trail got rougher and there were many downed logs. Somewhere along the way, we passed a man pulling a cart behind him! He had back issues and could not carry a pack anymore. The downed trees must have been tough for him!

The Middle Ridge trail was definitely the most difficult part of the loop because of the trail quality and lack of views. But Buck Creek Pass is not too far. We got there around lunch time and set up a camp before packing light and starting up the trail around Liberty Cap towards High Pass.

The trail to High Pass must be one of the most beautiful trails in Washington, especially considering it is easy! It slowly gains elevation, traversing across open wildflower slopes, thousands of feet above the Suiattle River Valley, just a stone’s throw from Glacier Peak. Then it wraps around to the Buck Creek side of the ridge, offering views of the mighty Entiat peaks.

We stopped at an overlook around 7000 ft where we could see Triad Lake, a little below actual High Pass. I could almost peer into the wild Napeequa Valley beyond High Pass, but would have to come back for more.

The camps at Buck Creek Pass are in the trees and a little below the actual pass so around sunset, we walked back up to pass. We talked with an older couple who was doing the same loop but in a week. They had flown here before from California and tried to do it for years, but had logistical issues or fire problems. It made me realize how lucky we were to be able to do this world-class loop in just a long weekend.

The next day was simply the long descent out the Buck Creek drainage. We got back to our car just after lunch. This was our fourth annual family backpacking trip, and in my opinion, the most beautiful! This loop was just as incredible as I had imagined, with diversity of terrain that is nearly unbeatable. I would do the loop again in a heartbeat.