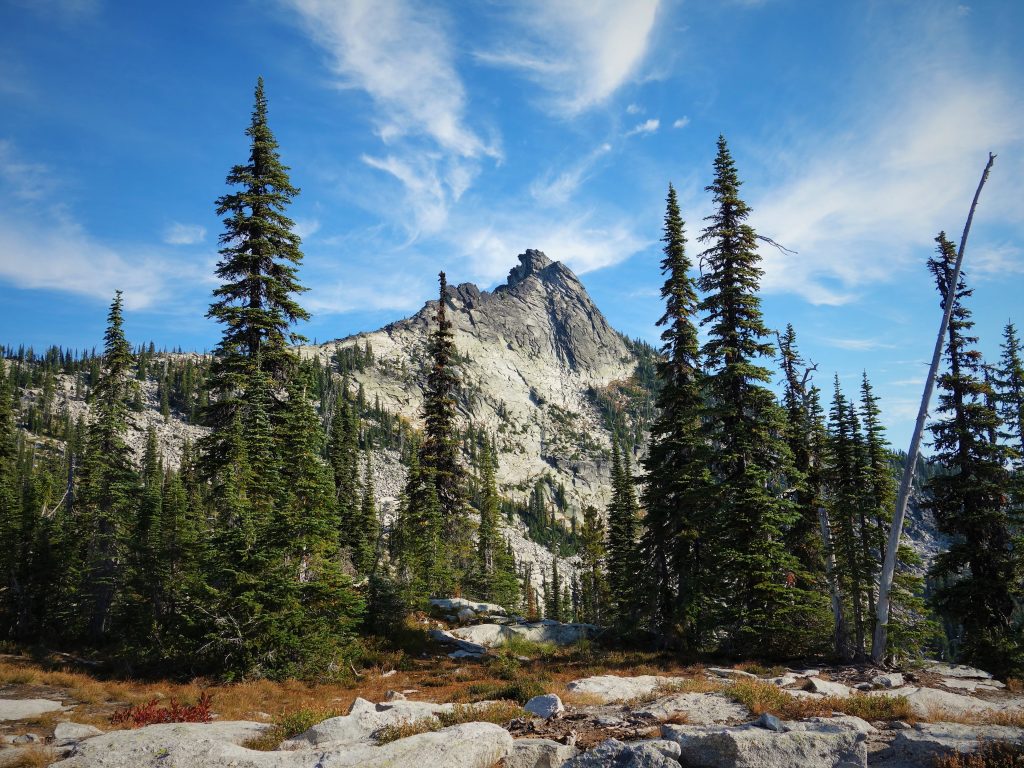 Returning to the Selkirk Crest

During the first few weeks of my freshman year at Gonzaga University, I went on a school-led three day backpacking trip near the Selkirk Crest of Idaho, traversing between Beehive and Harrison Lake. I found all the exposed granite made for wonderful cross country travel. Harrison Peak, with its overhung summit, called to me but I was not able to scramble up it since I was on a school trip. I always wanted to come back and three years later, I did.

Jacob and I got an early start since it was going to be hot by afternoon. We took the easy trail up to Harrison Lake, where we took a short break.

We did not have much beta on the approach to Harrison Peak or the technical south face route in general, but we found a climber’s trail up the shoulder to the right of the lake and began traversing towards the peak. We had a clear view of the south face from a distance.

The terrain got progressively harder and we were soon boulder hopping. We arrived at the base of the route at just about two hours from the car. Looking up, the south face looked pretty complex but low angled with no distinct route.

I led the first pitch up the series of corners / flakes. The cracks were thin, taking mostly small cams. I was glad we brought double #0.4 cams! The rock was generally pretty clean. Although it was probably only 5.7, the pitch demanded my attention because I was unsure where to head and protection was not always straightforward.

Jacob took the second pitch. It was his first alpine rock climb and he managed the route finding well and brought us up to a nice ledge. Here, the summit pitch came into view. We knew we had to eventually get to the notch, where a crux lieback would lead us to the summit.

With no particular knowledge of where to take this pitch, I just wandered up at first. Then I spied a splitter hand crack and it sucked me in! 10 feet below the crack, I found an old piton. The handcrack was perfect and pure joy. Above, I traversed left to the final notch. A short 5.7+ lieback brought me to lower angle terrain and finally the summit! Jacob easily followed the route, although I struggled with rope drag after such a meandering lead.

On top, we took a lunch break and admired the scenery around. We also inspected the massive overhang on the summit.

Since it was already getting pretty hot, we started the scramble back down. It was mostly easy boulders at first, but the trees got thicker, as we had read. After only about 15 minutes of thicker bushwhacking, we popped out onto a trail, which we took back to Harrison Lake. We arrived at the car 6 hours after we began.

The south face of Harrison was an awesome climb! Given the beautiful scenery, moderate climbing, and short approach it is surprising that this route is not a classic. Certainly if it was anywhere near Seattle, it would be crowded. For us, it was merely an introduction to the huge potential of the Selkirk Crest, and the beginning of Jacob’s alpine rock career!