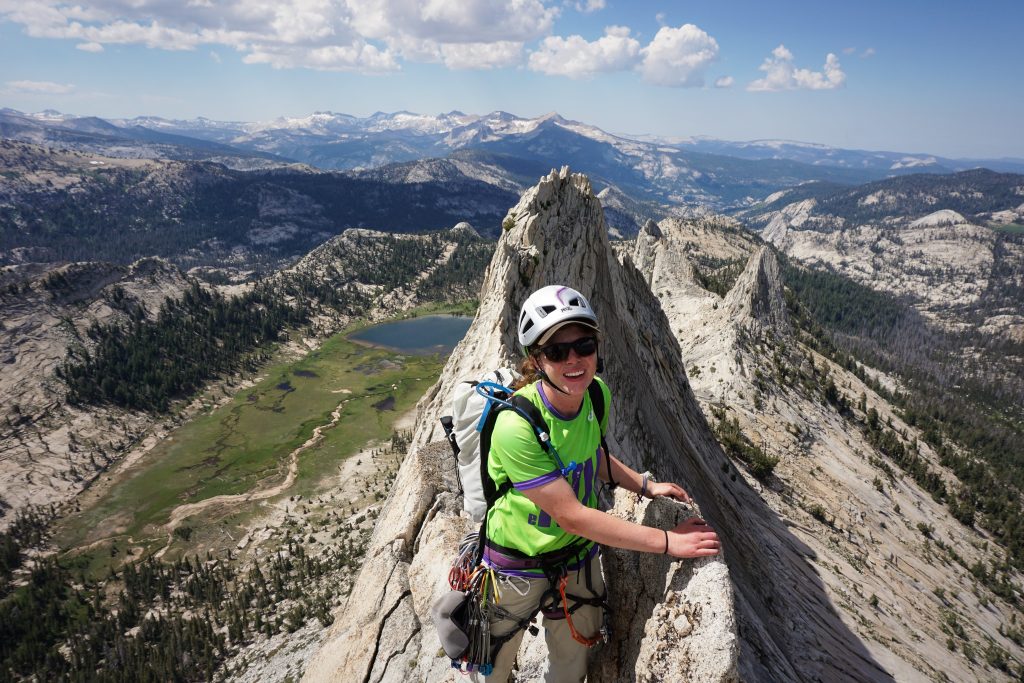 Ever since I saw photos of the knife-edge of Matthes Crest, I knew I had to climb it. The steep, serrated spine one mile long called to me even when I knew little else about the Sierras or Yosemite. As I did research into the area, I found that people commonly also climbed Tenaya Peak and Cathedral Peak, two other easy alpine climbs, along with Matthes Crest. Since we had tagged Tenaya Peak the night before, Matthes plus Cathedral seemed like a fair pairing for our first full day in Yosemite!

We left from Tuolumne Meadows at sunrise, following the use trail towards Cathedral Peak. We passed this popular spire, continuing on past the Echo Peaks. This section of easy cross-country travel featured some prominently rectangular horizontal dikes, obviously cut out of the granite by passing glaciers and boulders. The geology of this area was very impressive, with tons of glaciation, none more prominent that the obvious two glaciers that ripped either side of the incredible Matthes Crest.

When we arrived at the south end of Matthes Crest, there was just one party ahead of us, so fortunately crowds would not be too much of an issue! With Kylie in the lead, we simulclimbed easy 5.3-5.5 300 ft up to the crest. There, we saw the spectacular knife-edge traverse that lay before us. The south summit was half a mile away, with countless towers, drop offs, cracks, and needles between us. Confident the scrambling was easier for a while, we put away the rope. Now for the fun part!

Moving forward, the rock seemed very solid and textured. Moves that looked intimidating from afar proved to be mostly class 3 and 4, just often with exhilarating exposure!

One prominent section featured a 30 degree ramp less than two feet wide with cliffs on either side! We both cautiously tiptoed up the sticky granite.

All too quickly, we found ourselves closing in on the South Summit of Matthes Crest. One low 5th move and some fun scrambling dumped us out on the little summit! Looking across at the North Summit, we could see lines and lines of cracks up the vertical face. Although the traverse technically is only half complete at the South Summit, we chose to eat lunch here and descend since we still had a full afternoon with Cathedral Peak planned!

We made a few rappels, careful to not get the rope snagged and descended to the bottom of the notch between the North and South Summits. From here, we packed up and began retracing our steps to Cathedral Peak. It was fun to look back on Matthes Crest, which looked so intimidating and improbable from a distance.

Cathedral Peak is the iconic peak of the Yosemite High Country. It looked magnificent in the afternoon sun. As we closed in on Cathedral Peak, we noticed something between Cathedral and its subsidiary summit, Eichorn Pinnacle. Upon further inspection, we realized it was a slack-liner! We took a moment just to watch. They fell a few times, but were obviously roped in.

When we got to the base of the SE Buttress, there were climbers all over the face. Some were even following their first multi pitch climb (once again! Why in Yosemite?). We waited behind the particular duo that was also ahead of us on Matthes Crest. Eventually, we started up the face, with Kylie in the lead. After a balancy 5.7 section, I took the lead on the chimney pitch. I had read that this pitch was difficult and awkward with a pack, but I decided to take the pack anyways. After a few unsuccessful attempts, I gave up on fitting inside the tight chimney and instead ascended a steep handcrack next to the chimney before it widened and I could squeeze inside. Somehow, at the final pitch, the crowds dropped away and we made the final 5.6 boulder problem to the little summit all by ourselves. There was barely enough room for the two of us on top. It was getting late in the afternoon and the endless granite around us was starting to take on a softer hue.

We descended down the backside and found the climber’s trail wrapping around back to the base. From there, it was an easy hike out in the fading evening twilight.

This was truly an incredible day in the Yosemite High Country. We climbed probably the two most moderate, iconic routes in the high country and they could not have been more polar opposites of each others. The approaches were easy, the setting was wonderful, and the rock was perfect. Yosemite was everything we dreamed it would be.