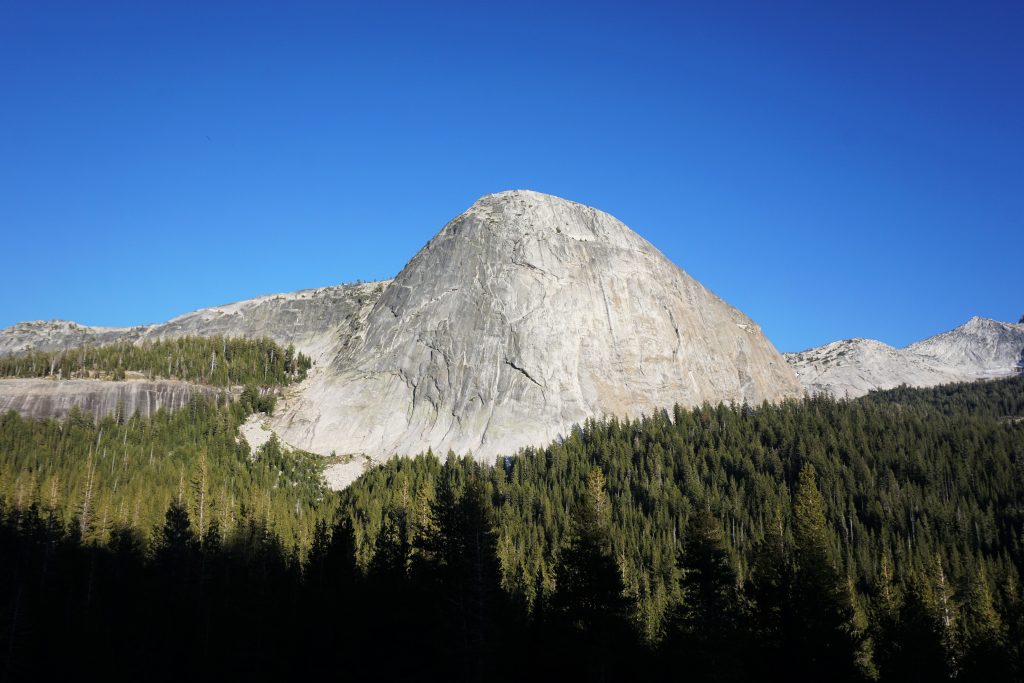 What is Half of Half Dome?

After some great fun on Cathedral Peak and Matthes Crest, we planned a “rest” day in Tuolumne Meadows before departing Yosemite for the High Sierra. We were originally planning just some short climbs on Lembert Dome or DAFF Dome, but found Fairview Dome on Mountain Project. It was extremely highly rated, had a short approach, and seemed within our grade (Yosemite 5.9). Plus, it was a 50 classic climb of North America! This would not be as short of a day as we were quite planning, but decided to go for it anyways.

We slept in, not trying to be first on this popular route. As we emerged from the trees at the base of Fairview Dome, we were blown away. We had never attempted to climb something so huge, steep, and sustained before! It was this huge monolithic face with an obvious crack system splitting the face on the left. It was incredible that there could be a route as easy as 5.9 on this intimidating face. I guess it is not quite as impressive as Half Dome, but it is probably half as tall and large. That still makes for a big hunk of rock.

Despite our late start on this long, 10-12 pitch route, there was still a party of three in front of us on the first pitch. The two followers were struggling to climb the first 5.9 pitch as the leader called down instructions about how to remove trad gear. Yet another complete beginner group on a Yosemite classic! We read in comments on Mountain Project about how these famous Yosemite routes attract the most basic of beginners, but we were still surprised with what we saw here and on Cathedral Peak. To us, Yosemite is the big leagues. You shouldn’t go climb there as your first multipitch or trad climb. You need to be efficient, smooth, and comfortable at the grade. Go to some unpopular crag to drill multipitch techniques. Otherwise, you are being rude to other climbers.

We accepted that this was going to be a slow climb and took a relaxed attitude about it. The first pitch was an extremely fun and sustained pitch, a full 200 ft of 5.8-5.9 finger crack on perfect granite. We knew this was the crux of the climb, so this meant we were doing pretty well to get through it rather easily. Yosemite 5.9 did not seem too bad, but perhaps it is harder in the Valley.

The next few pitches were varied, with some laybacking, a roof or two, and even a short off-width crack. We had some awkward belays since the party of three often took the better belay stances, but there was still usually opportunity (and plenty of time) for some nice nap spots.

Around pitch 8, there is some traversing far to the right. The leader from the other party was an old-timer who had volunteered to take some college kids from his alma-mater, Purdue, multipitch climbing in Yosemite. So these two college boys were following him up Tenaya Peak and Fairview Dome. I do not think they realized how lucky they were! Although the leader had climbed this route once before, he did not quite remember where it went. We explored lower than them but we both ended up at the same tree. From here the climbing eases up, so both parties started simul climbing. Higher up, they let us pass. Kylie wandered through some low 5th terrain and suddenly, she found herself standing on the perfectly flat summit!

As we descended the backside, we walked down incredibly featured, knobby granite slabs. It was like the surface of a different planet! Sometimes the knobs were huge, other times tiny. It made for quick walking down and eventually we found the trail in the woods, which we followed back to the car.