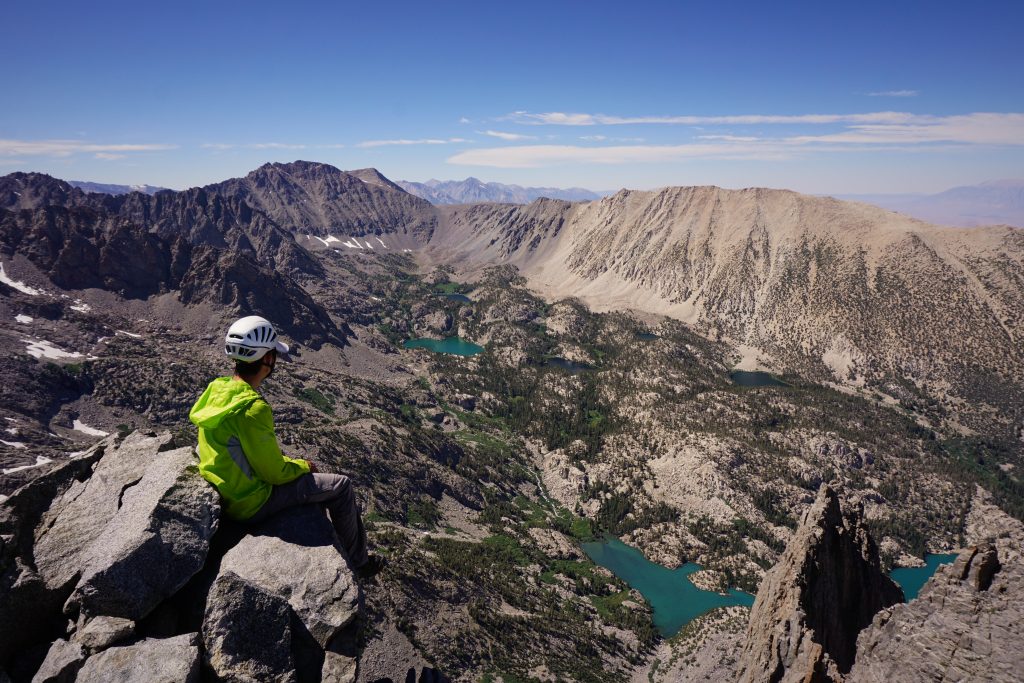 A Temple of Towers

Temple Crag is an impressive peak. It features one of the most complicated faces in the High Sierra, nearly 2000 ft tall, with a handful of prominent buttresses and dozens of towers. Any route on Temple Crag is a test not necessarily of rock climbing ability but rather of efficiency and navigation. Since Kylie and I were still new to big alpine rock routes, we chose to go for the technically easiest route, Venusian Blind (5.7, 10 pitches). With a multi-hour approach and descent, we knew this was going to be a long day.

We left the Big Pine Trailhead well before sunrise and hiked up through the dry desert sagebrush with headlamps on. Higher up, we entered groves of pine trees, but it still felt like a desert. The Palisades, which are home to half of California’s 14,000 ft peaks, rise incredibly above the eastern valley nearly 10,000 ft. The Palisades have many of California’s biggest glaciers, although they are really nothing more than permanent snowfields by Washington standards. I had really wanted to spend a few days in the Northern Palisades doing classics like Swiss Arete on Mt. Sil and the Thunderbolt-Sil traverse, but unfortunately all reservations were taken for the month of July back in February! So we settled on a fast-and-light day trip.

We reached Second Lake a few hours in. We chose to cross the outlet of Second Lake and traverse in towards Temple Crag. This led to a ton of sidehilling across unstable boulders. We were quickly learning that the High Sierra was full of defunct glaciers, massive moraines, and miles and miles of choss! At times, we longed for the snowy approaches of the Cascades.

We reached the base of the buttress and walked up the snowfield (also covered in choss and debris) and began scrambling. We scrambled probably 400 ft up the route before the technical climbing began. There was another party on the first pitch who had camped the night before. The climbing for the first few pitches was wandering but generally easy and we seemed to be staying on route quite well.

As we got higher, the buttress narrowed and we approached a series of towers. The face was daunting, with a maze of cracks and gullies. Rap slings littered the gullies, signs of parties that had to bail after getting off route. It was understandable why less experienced parties could get confused.

Around the fifth pitch, the other party stopped for lunch and let us pass. There was now no one to follow! We started to get into a rhythm, dispatching pitches with ease. The towers were incredible!

Since it was already past noon, we decided to cut the climb one pitch short and rappel into a gully. I had no trouble locating the “hidden rappel anchor”. Right as I was rappelling down, the other party came around the Ibrium Tower two pitches below me, frantically asking me where the route continued. They were tired and ready to go down, so they were very excited when I showed them the location of the rappel anchor. This kind of route finding can be stressful and tiresome!

The scramble to the summit took another 45 minutes, but the summit was totally worth it! We had incredible views of the Palisades, including Mt. Sil, Middle Palisade, Norman Clyde Peak, and Thunderbolt Peak.

On our way down, we ran into the other guys, who chose not to go to the summit. We tied our ropes together for the one rappel to make sure we would make it down, but one 60m rope also would have been fine. From there, we had a snowfield to descend. One of the other guys pulled out a plastic bag to wrap around his pants and a nut tool to arrest with during his glissade. Kylie and I simply boot-skied down the hard snow, going much faster. It is funny how uncomfortable climbers from other areas of the country are on snow, but I guess the Cascades make snow travel a prerequisite to alpine climbing.

On the way down, we took the more direct route to Third Lake, which got us back on the trail and had less moraine travel. If I did it again, I would do this both ways, as the approach from Second Lake has a lot of loose moraine to deal with. We rounded Second Lake in the evening and took one last look at Temple Crag.

From there, it was a long hike out to the car, arriving back once again just as headlamps would be needed. Our timing was impeccable! Another High Sierra classic route sent, and another great day together.