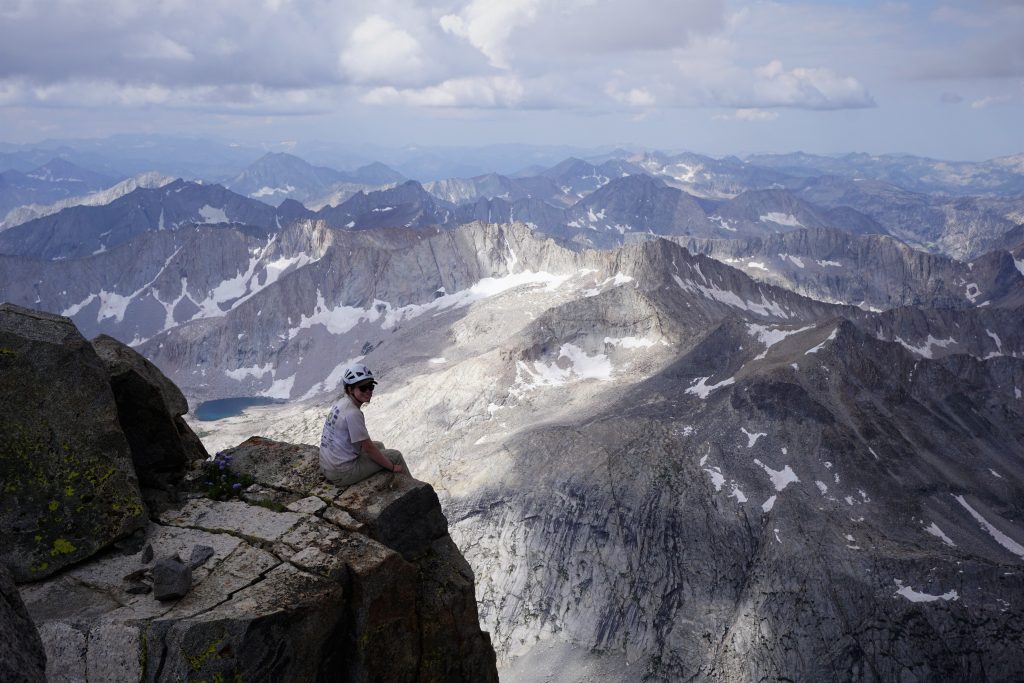 Back in February, I had really wanted to get an overnight permit reservation for the Northern Palisades (Mt. Sil, Temple Crag), but they were all taken so we settled with a day climb of Temple Crag and an overnight in the Southern Palisades. Because there are not as many lakes and the trails are more difficult, the Southern Palisades are much less visited than their northern counterparts. In reality, they are equal in height and alpine feel. Our original plan was to climb Twilight Pillar (5.9) on Norman Clyde Peak, but after nearly two weeks of hauling an alpine rock rack and rope up and down scree fields, we decided to forgo the technical gear and climb a 4th class scramble route up Middle Palisade instead.

After the long day on Charlotte Dome the day before, we got another late start, leaving the Big Pine Trailhead in the early afternoon. The Palisades always look so imposing from Big Pine, with steep glacial peaks rising straight out of the literal sagebrush desert. The trail into the Southern Palisades was much more difficult than the meticulously maintained trail to the Northern Palisades. Combined with heat, fatigue, and mosquitoes, we did not enjoy the hike in quite as much as we should have.

We got to Finger Lake in the evening and found an optimal campsite right above the lake in a notch between rocks. Finger Lake was a long, thin aqua-blue lake set in a steep glacial cirque. It was different than most Sierra lakes we had seen before and very pretty. We were the only ones camping there.

We slept well, glad to finally have an objective that was not too physically challenging over two days.

We started up the climber’s route towards Middle Palisade. The Palisades are the most “alpine” peaks of the Sierra and do have possibly the most extensive glaciation in the Sierra, but they are still lackluster if you’re looking for snow and ice. The Middle Palisade “Glacier” would be just a small permanent snowfield if in Washington. A few tiny cracks showed and some bare ice. Still, the steep faces of Middle Palisade and Norman Clyde Peak above were impressive. It was interesting to think that there was a class 4 route straight up the face of Middle Palisade.

At the base of the scramble, we struggled for a little to find a way through the initial steep section. I kept running into loose fifth class and having to downclimb in my running shoes. In the end, I found an exposed traverse that maybe could be fourth class, but felt more difficult. I had read that most parties never really find the “fourth class” route.

After the initial 100 ft, the rest of the scramble was mostly 2nd and 3rd class. Although the rock quality was not great, it was in a totally epic setting along this huge spine of a 14,000 ft peak.

The clouds and fog were swirling in and around the massive Palisade peaks much like it does in the Cascades when a marine push is breaking up. It was very beautiful and a nice change for the Sierras. For the morning, this was extremely abnormal in the Sierra. We were glad that we were going to be up and down quickly since we assumed the morning moisture did not indicate a dry afternoon.

Once on top, we enjoyed the lofty summit as we looked out over miles and miles of above-treeline High Sierra terrain. It was also Kylie’s first 14,000 ft peak and my second (after Rainier)!

The scramble down went quickly and we managed to slip back across the low angle part of the “glacier”. The hike out was nice, with even a pleasant shower to cool us off down in the lower elevations. This was the last, and ironically, probably the least epic of our High Sierra climbs, but it was a good break from the high intensity technical climbs and long days. Next up was the Sierra High Route, which we knew would be more challenging than all the Sierra climbs combined! But first, off to a warm shower and Thai food in Bishop…