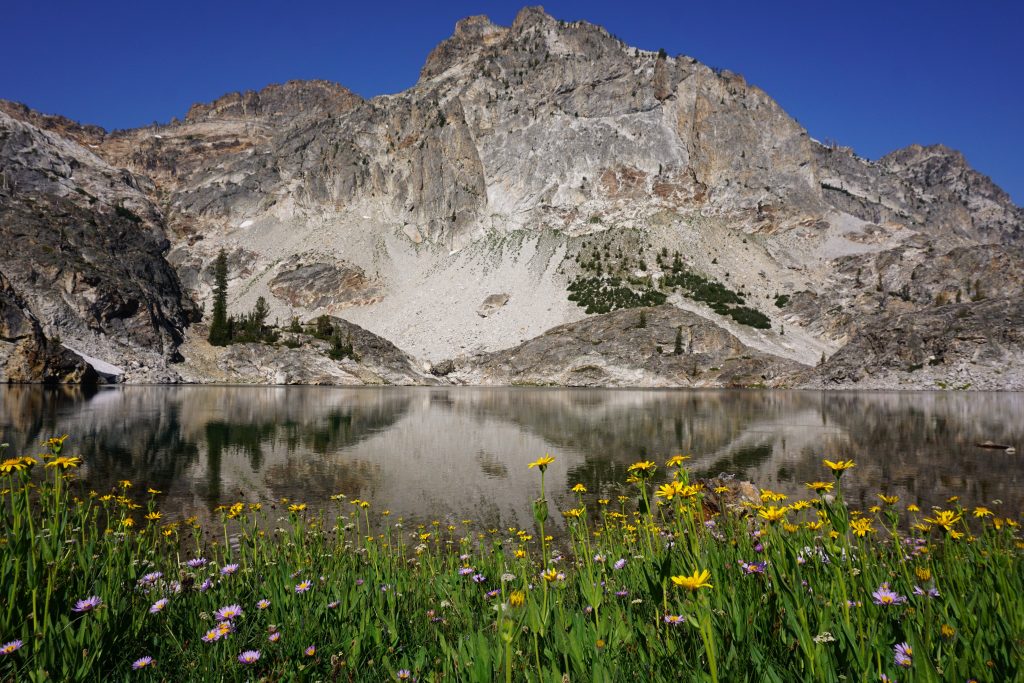 On My Own Again

After Kylie broke her foot on the Grand, I spent some time thinking about what I should do. Many people would have called it quits and ended the trip there, but both Kylie and I agreed that I should continue this trip and make the most of my remaining two weeks of summer vacation. I had first envisioned this trip three years ago, before we met, before I could rock climb or ski, back when all I had was a pair of running shoes, ambition, and an innocent lust to always climb higher. I needed to finish this trip out. I might never get an opportunity like this again. I decided I would return to my roots of scrambling and trail running by visiting the Sawtooth mountains in Idaho.

I arrived in Stanley late the night before, tired from driving straight from Reno the day before and from Jackson to Reno two days before that. Waking up at sunrise, I began a slight jog up the Sawtooth Lake trail, but the smoky air made running kinda difficult. I took the left turn after a mile and continued towards Goat Lake. The reddish rock spires around me reminded me of Washington Pass. I initially missed the unmarked turnoff to Goat Lake and arrived at Goat Falls.

I retraced my steps and took the steep trail to Goat Lake. There were quite a few backpackers camped here, but it was still a calm morning… until the peace was disturbed by gunshots being fired across the lake! A fine introduction to Idaho…

I continued around the edge of the lake when suddenly, I slipped on a slick rock and caught myself weirdly, shattering my Z pole in my left hand. Furthermore, my left knee buckled in a weird way. I stood up and felt some pain in my knee so I took a break and sat down. Range of motion was a little difficult, but not impossible. I could turn back to the car, but at this point, that would feel like returning back to Reno and giving up on the trip. How did I suffer my worst injury of the whole summer on such a benign trail? Was I meant to turn around after the Grand Teton and now this?

For better or for worse, I decided I would not let this slip up turn me around. I could still hike, although I definitely had to favor my right leg. A short little snow patch brought me to another series of serene, uncrowded lakes.

I was surprised by how much snow was left here in mid August. This was the highest region in the Sawtooth and north facing, so it made sense. I slipped my way up snowfields with one good pole, one good knee, and my trusty Ultra Raptors. My first peak in the plan was Thompson Peak, the highest in all the Sawtooth. To be honest, it was a pretty garbage class 2+ chossfest most of the way. I had heard the Sawtooth had great scrambling so this left me a little disappointed.

The last few moves to the true summit was a little exposed class 3+ on much better rock, thankfully. The summit views were good, but not great. It was definitely smoky from all the fires across the west.

The most bizarre part of this summit was how there was this endless cloud of butterflies swooshing up the gully I scrambled up and engulfing the summit. I somehow managed to get a few photos without them, but the bug pressure was pretty intense. I’ve seen summit butterflies and summit ladybugs before, but never in this quantity.

I did not do much planning before this trip, but I knew enough that Merrit Peak was some class 3-4 scramble that fewer people did. From the summit of Thompson, it looked like I could stay pretty high and traverse over. In general, the traverse was pretty easy.

The scramble up to the saddle to the left of Merrit had some grungy looking slabs covered in sand, but I was able to find a class 3 way through a bunch of ledge systems generally starting lower left and trending up and right. At this point, I was tired enough of loose rock, so I decided to stick to the crest and hopefully find some better rock, performing a few class 4+ moves but generally more fun.

The descent of Merrit back towards Goat Lake led me down a creek drainage, which was a little obnoxious, but I didn’t obviously see any other way down through the cliffs. My knee had been hurting all day at a low grade, but didn’t seem to be getting worse. I arrived at another nice little lake and took a swim here in the afternoon heat.

I walked back down to Goat Lake and then took the trail out. I passed a couple with snowboards; apparently they got their August turns on the little strip of snow just above Goat Lake. I arrive back to my car around dinner time, ready to head into Stanley and find some free place to setup a stove and cook myself some cheap dinner.

2 thoughts on “Thompson and Merrit Peak”