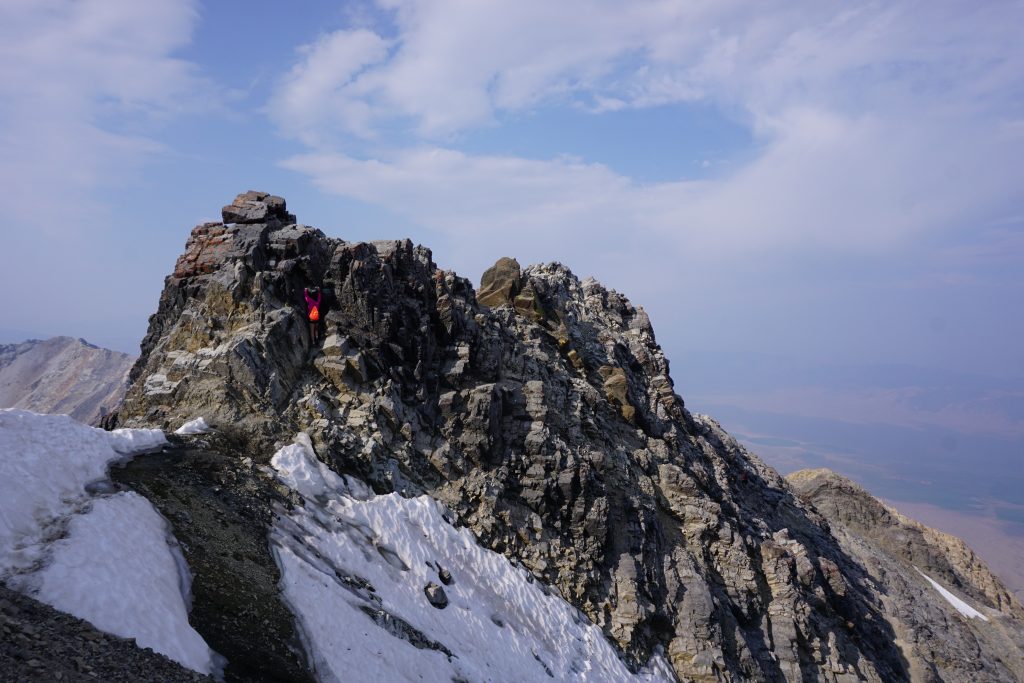 The Rooftop of Idaho

Borah Peak is the highest point in Idaho at 12,667 ft and has a relatively easy ascent of 5000+ ft elevation gain, so therefore it is very popular. I arrived at the Borah Peak trailhead the evening before to chill and ice my knee. Turns out it was a fantastic people watching spot. I made the mistake of parking too close to the actual trailhead. Even as it was getting dark, people were still coming down the trail to a hurrah of cheers and celebrations. Then they would loudly recount the perilous 12 hour journey that involved being on the summit during an electricity storm where ponytails began to lift upwards towards the sky. Eventually, I just rolled up the windows of my van and went to sleep.

I started the next morning around sunrise. The trail up Borah is very direct and steep – my kind of trail. It gained about 4000 ft in the first 3 miles to where the scrambling began on “Chickenout Ridge”. As I gained elevation, I got a good view of the Lost River Range. It was one of the most barren, chossy, and vertical ranges I have ever seen. There were huge fall lines thousands of feet long. The ski mountaineering potential looked incredible (so did the avalanche danger).

I passed most of the parties who started before me and reached the beginning of Chickenout Ridge before taking a real break. My knee was doing pretty well, but I was glad this would be a short day. The ridge had some fun scrambling, mostly solid class 2 and 3. There was a short section of snow to cross that was no problem at this time of year.

The final bit before the summit was pretty loose, but not so bad that I felt I needed a helmet. More like a hike up steep scree. I reached the summit about 3 hours in and had it all to myself for a few moments.

Shortly after getting to the top, another guy topped out and exclaimed, “F*ck yeah!!! Give me a high five man!” I gave him a high five and then he immediately proceeded to call his girlfriend and let her know he made it and he is OK. Meanwhile, I found a spot out of the wind to chill.

On the way down, I checked out this steep snow/ice tongue that pops out close to the summit. I believe it was the top of the North Face of Borah Peak, a solid AI3 late season route. It looked quite fun.

The lighting was kinda strange the whole morning. It felt like there were high clouds, but not very threatening for rain. It made these barren mountains look even more foreboding.

On the way down, I once again passed two abandoned rucksacks near Chickenout ridge. Talking to two other nice men, I learned these likely belonged to some folks who had to abandon them a few days prior when their buddy got injured and had to be helped down. So I picked the two bags up and carried them the rest of the 4000 ft down. I left them at the trailhead with a note. Hopefully they got their bags back.

At the bottom, I met a concerned family (concerned that I go hiking by myself) that was a little confused how I was down by noon on a hike that supposedly takes 10-12 hours. I assured them that what I was doing was perfectly safe, but they still seemed a little apprehensive.

Borah Peak was an interesting experience. It kind of reminds me of Mailbox Peak in Washington and Mt. Whitney down in California for their huge popularity and reputation. It has been so interesting this summer jumping back and forth between super popular destinations and less crowded ones. I think Borah Peak would be fun to come back to some day to do a September ice climb or spring ski descent. The Lost River Range is yet another unique range in the west.