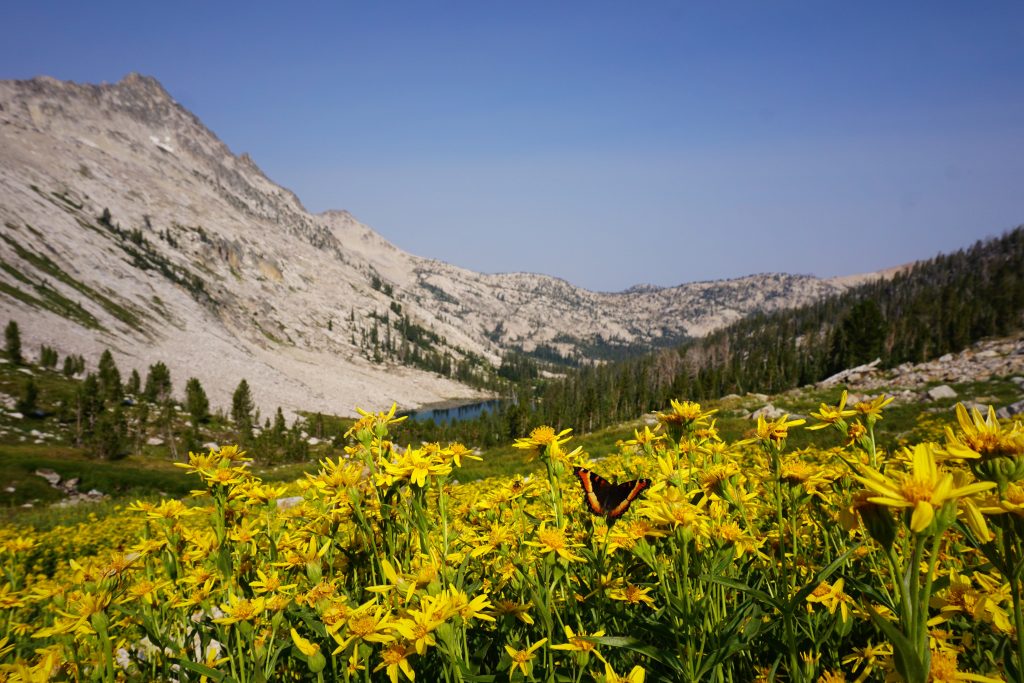 The Jewel of Idaho

With my knee feeling a little better after two easy days, I wanted to get back in the Sawtooth. Since the Sawtooth are often referred to as “the Jewel of Idaho”, I wondered: what is the crowning jewel? A little perusing on the internet led me to the Alice-Toxaway Loop, acclaimed as the finest easy backpacking loop in Idaho. Billed as a 2-3 days trip, I figured I could complete this 18 mile loop in half a day, so I decided to also thrown in a little scramble up Snowyside Peak.

I left the trailhead at Petite Lake around sunrise and quickly made the right turn to hike over the ridge into the drainage to the north. The trail was relatively flat and my knee was feeling surprisingly good. I made good time to Farley Lake.

I wove my way through pretty little meadows and past trickling streams. The trail was very easy, but the terrain around me a little more rugged. The lakes were all wonderful.

After Toxaway Lake, I began the largest climb on the trail to the pass on the shoulder of Snowyside. I passed through a nice flower meadow that was absolutely swarming with butterflies! I took a few minutes just to marvel at them.

From the pass, I had a clear view of the scramble up Snowyside. Here I passed a party of four on their way up.

The scramble was generally much better than the Thompson and Merrit Peak. I cruised up to the top and had a great view of all the lakes and peaks around me in the southern Sawtooth. The Sawtooth live up to their name; they are incredibly rocky and void of lush grassy meadows.

When I got down to Twin Lakes, I took a quick swim in the lake in the afternoon heat. From there, I began to jog a little more down to Alice Lake.

The rest of the loop was a fast jog downhill, although the trail was a little rocky for running. My knee was holding up fine, so I felt I would be ready for the alpine rock trip with Jacob the next day!

In total, the trip was about 20 miles and 4000 ft gain with most of that on easy trails. I would rate it as one of the better moderate-length loops I have ever done. I would recommend it to the beginner backpacker, the savvy trail runner, or anyone in between!