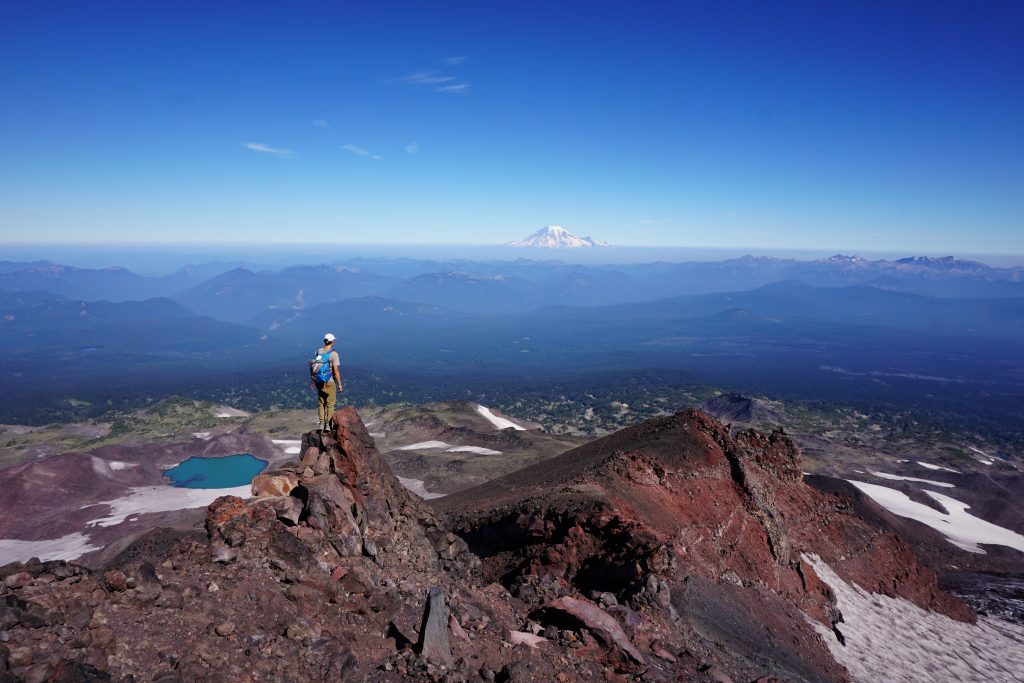 After over two months on the road, I was finally heading home. My last stop of the trip would be also be, strangely, my first stop in my home state. It seemed I was almost more familiar with the high plateaus of the Sierra or the desert plains of the Rockies than the lush woodlands of the Cascades. As I crossed the Columbia and drove towards Trout Lake, I found myself in the shadow of a huge snow capped volcano. Things began to feel familiar once again.

The Mt. Adams Traverse is a trip I had known of for quite a few years but just never had the desire to make the long drive down to Mt. Adams with the North Cascades closer. The route starts on the north side at the Killen Creek Trailhead, climbs the North Ridge, descends the popular South Spur, and goes back around the west side of the mountain on trails. I had never climbed and semi-circumnavigated a peak like this before, so I was looking forward to a different, novel experience of Adams.

I reached the trailhead the evening before and hung around for an hour before Daniel pulled up, driving in from Seattle. We expected Logan to arrive from Wenatchee later that evening, but he never showed up. We had no cell service, but he still was not there the next morning. It turns out that Google Maps had tried to lead him through the Yakima Indian Reservation, which is not allowed, and then through some closed forest service roads. Unfortunately, he did not make it to the trailhead so the next morning, Daniel and I set off from the car at around 7 am by ourselves.

The first three miles went through peaceful green meadows with peek-a-boo views of Mt. Adams. It was huge! I had been climbing peaks of similar height all summer, but I honestly forgot how huge the Washington volcanoes are. Pretty quickly, we were at treeline and greeted with views of St. Helens and Rainier. Miraculously, the smoke had cleared for just this day, giving us healthy air and distant views.

At High Camp, there were many other campers and some other mountaineers. The whole north side of the mountain was much more beautiful and less crowded than the south side. It had soft green meadows, trickling creeks, and a turquoise glacial lake.

Above the lake, we filled up with water and began up late season snowfields and moraine. When on the moraine, there was usually a climber’s path that wound its way up to the North Cleaver proper, making travel pretty easy. Once on the cleaver, there was a little class 2 scrambling here and there (with maybe one section of class 3), but mostly just walking on a climber’s trail. This greatly contrasted with horror stories we had heard of loose class 4 and intense exposure! Still, it was fun and easygoing.

Up high, the ridge broadened and we eventually reached the summit snowfield. This snowfield was huge and low angle, giving us the opportunity to even jog a little. We passed many yellowish sulfuric vents, which created interesting rocks. We were the only souls up on this massive hunk of ice, sitting high above the smoke throughout Washington.

At the summit, there were considerably more people, but still not too crowded considering it was a weekend on Adams. We were the only ones who had ascended a different route than the South Spur.

Now was the fun part. We took off down the south face, slipping and sliding down the icy snow. There was more rock than we had hoped for and the snow did not really soften, despite our good timing in the early afternoon, but we still moved quickly, whizzing by all other parties and whooping and hollering along the way. On the main snowfield from the false summit, it was pretty icy and tricky, but fast and some of the most technical boot skiing I have ever done! Unsurprisingly, we were the only ones willing to test the snow, despite the fact we had some of the least appropriate footwear, some old running shoes. We had crampons, but enjoyed the challenge without putting them on.

Another hour or less later, we reached the trail junction to the Around the Mountain Trail. While most people would be essentially finished at this point, our journey was just beginning. Although we had finished most of the elevation gain, we were still nearly 20 miles away from the car in the early afternoon. It was going to be tough.

The Around the Mountain trail passed through nice, winding flowers and burned zones, crossing many super silty glacial streams that were raging in the afternoon heat. We managed a good mix of walking and running, averaging about 12 minute miles. Slowly yet surely, the aspect of the mountain changed, as well as the angle of the late afternoon sun. After traversing the spine of the sleeping giant, we were now tiptoeing around its appendages, observing its size and grace from the base. It was truly a unique way to experience a Cascade classic.

Around 20 miles in, my energy level really began to drop. I had some bars and candy left, but it seemed that each bite was only giving me a few minutes of energy, rather than the longer amounts I am used to. My muscles were still strong and my joints okay, but I could feel the reserves of bodily energy drying up. And thus, a feeling of complete exhaustion began to wash over me that has only hit me a few times ever. It is not a lack of fitness, drive, or muscle; it is the powerhouse of our bodies wearing down. After months on the road running huge calorie deficits, my body was catching up to me. It simply had no more fuel to burn, nothing left to give.

From this point on, moving was difficult, but I knew I still had something like 10 miles left. I tried to focus on the scenery around me, and it helped. We were winding through thin forests in soft evening light, admiring the Adams Glacier as it spills down the west side of Mt. Adams. Slowly yet surely, like someone experiencing loss, I moved past pain and bargaining to acceptance. I immersed myself in the cascading energy of the streams and the invisible pulsing of the volcanoes. Each step began to feel not like suffering, but a discovery into who I am and what these mountains mean to me. Just a few miles ago, home had seemed so far away. But now, drifting through the green forests and mighty volcanoes of Washington, it finally occurred to me: in this alpine wonderland, I was already home.

Ultramarathons in the mountains can have such an emotionally profound impact on those who venture to test themselves against the timeless giants. Although the experiences can seem to last forever, we often leave with a sense of brevity: our strength is so short-lived when measured in the time scale of mountains. We leave our footprints for an instant upon the soft impressionable land, only to be wiped away by the weather and sun of tomorrow. It is better to move quickly through these mountains than to be caught up in their mosaic of time. We flash for an instant, and then move on.

As each mile disappeared behind us, I felt more and more vindicated for all my efforts throughout the summer. It was as if each few steps represented a different challenge we had faced and overcome this summer. Each experience gave me more wisdom, endurance, and toughness. So it only felt natural than in the last three miles, sprained knee and all, I let loose, cruising down the Killen Creek trail at seven minute mile pace, faster than I had run all day, all summer. Although physically weak, I was finishing as a stronger person mentally and emotionally. I had come full circle, both around this lonely mountain and around the entire West. It was time to truly go home.