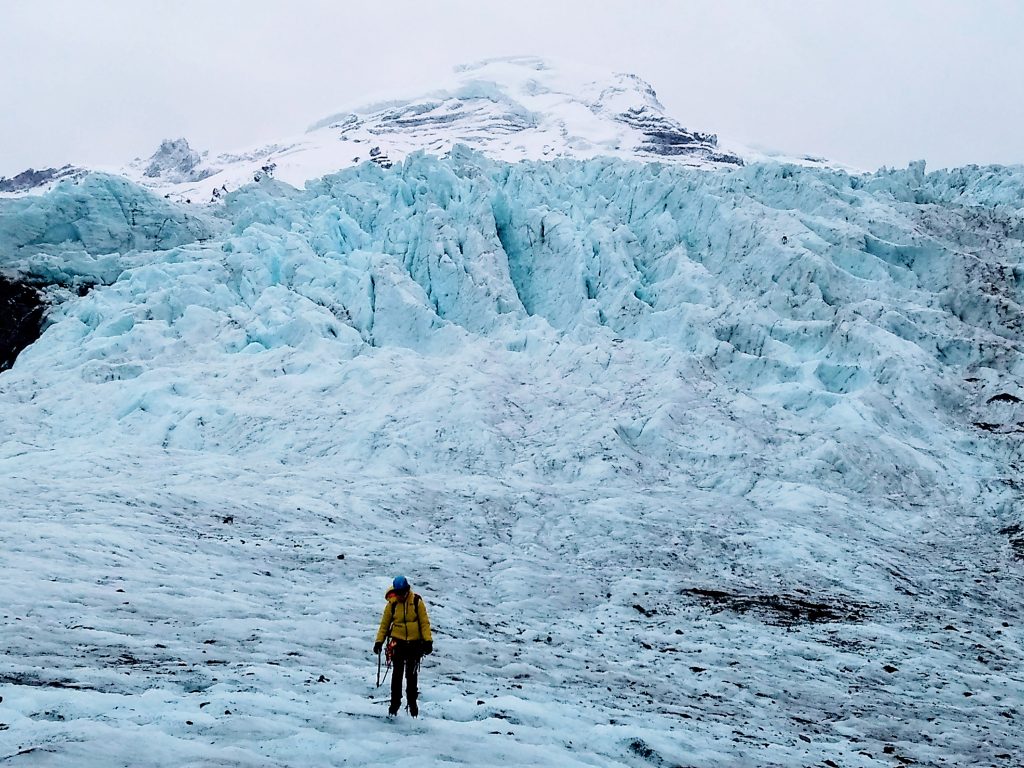 Since we were planning on going to a Halloween party Saturday evening in Bellingham, we decided to spend the day first up on the Coleman Glacier climbing in the seracs. This would be Kylie’s first time really ice climbing! There was a miraculously small weather window for Saturday, with weather moving in the in the evening.

It was a cold, sunny morning along the Heliotrope Ridge trail. Some of the stream crossings were quite treacherous, iced over but still with larges amounts of water flowing. We saw a few people go down. When we reached the edge of the moraine, we had a nice view of the very broken up Coleman Glacier.

We took the climber’s trail down and left for a few hundred feet, following the edge of the moraine. This eventually deposited us onto the base of the lower Coleman Glacier, where we put on crampons.

It had been a few years since I had been on hard, bare glacial ice this. Our crampons barely bit into the ice, even under the weight of our bodies. As we approached the icefall, I realized that walking up the 30 degree slopes to the seracs might not be so trivial. A slide would not be stoppable. Therefore, I decided to lead a very low-angle pitch and belay Kylie up. All of this took a while, so it was getting close to noon by the time we got to climb.

The seracs were very beautiful and consuming up close. We felt like we had wondered into the jaws of an icy monster, yet it was awe-inspiring. It made me feel grateful to live in the only place in the lower 48 where casually wondering through a glacial icefall is possible.

It took us a while to decide where we were going to climb, but we eventually found a nice crevasse that had moderate 70-80 degree walls. I decided I would lead it since it was low angle. My first few swings hardly made a dent in the cold, dense ice. This was not hero ice! But at least ice screws would be solid. Considering I had not been on ice since last winter, I felt a little awkward as a worked my way up and right. Luckily, the route was probably only WI2+, so it was still easy and I quickly reached the top. I made a V-thread anchor equalized with a screw for top roping.

For a few hours, Kylie and I took turns doing laps on this ice wall. Both of us felt more comfortable with each swing. I began to get my mojo back and tested myself on some steeper WI3 sections, which were no problem.

At one point, when I was at the top anchor, I heard a man slip and fall down the approach ice and scream in pain! He likely had been walking down the low angle ice. Once he had slipped, there was no way of stopping. However, it sounded like there were others in his party helping him out. I never saw them the rest of the day, so I assume they were able to walk out themselves.

Around 3 pm, we decided to pack up and head out. It took me a while to thread the rope through my naked V-thread, but I eventually managed. I belayed Kylie down the low angle ice and then downclimbed and walked down myself. We packed up the gear and hurried back across the glacial flats. The sunny morning had given way to a white fog that threatened to envelop the summit. Everything was shades of white and blue. It felt like we were on a different planet.

Snow flurries floated down from the sky on our hike back and it started pouring rain right as we reached the car. Perfect timing! Now, let it snow…