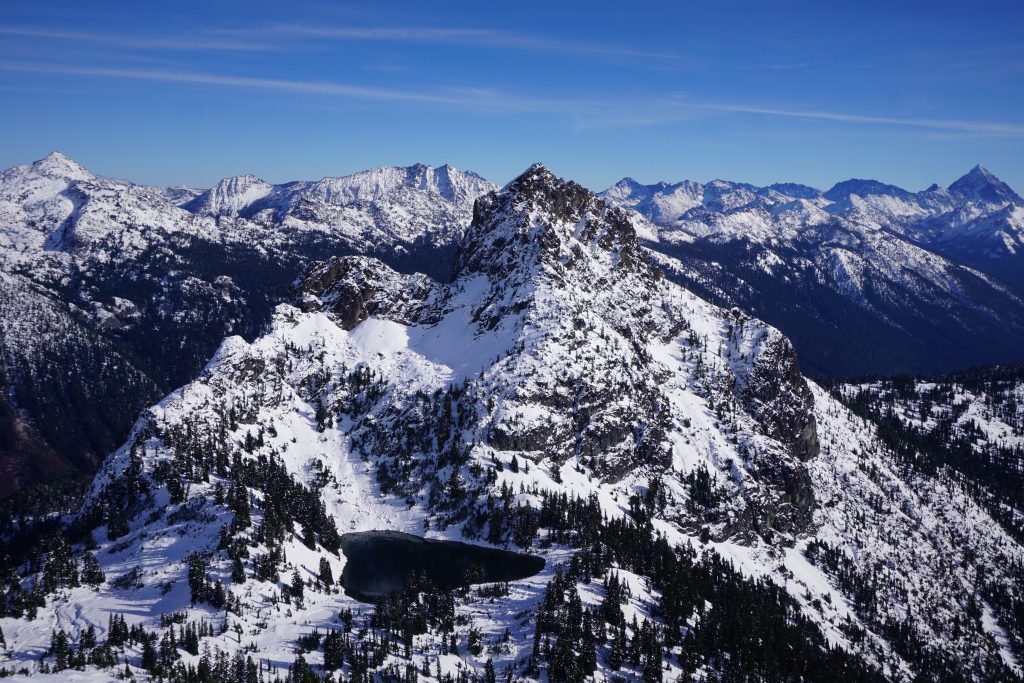 With some rare November high pressure in the forecast, Daniel, Logan and I got back together to make a late fall attempt on Mt. Daniel. We were unsure of how much snow was up high, but knew at least we could get to the trail head. A few weeks ago, everything was still snow free, but conditions can change quickly this time of year.

The long road in through Salmon La Sac was pretty in the pre-dawn light. There was a dusting of snow on the roads and some icy potholes to avoid. The creek was about 4 inches deep and 20 feet wide across the road, but Logan’s old Outback blasted through with no problem.

The hike up to the PCT went pretty quickly. When we reached Squaw Lake around 4800 ft, the snow was closer to a foot deep and sinking in started to become an annoyance. There was a boot pack and skin track ahead of us, but it still was not fast going.

After cresting Cathedral Pass, we dropped down and traversed towards Peggy’s Pond. This snow was on a southern aspect and had a melt-freeze crust. Sometime it held our weight and sometimes we broke through. It was nice and warm with the southern exposure.

The bowl around Peggy’s Pond is where the snow started to get really deep. I’d estimate the depth in most places to be 2-3 feet with most of that being powder. Peggy’s Pond had a real regal-like feel, nestled between the steep face of Cathedral Rock and the massive broads slopes of Daniel.

We made the mistake of going too far North before gaining the SE ridge, putting us on a more northern aspect and in deep powder. We wasted a good 30 minutes trying to get onto the ridge wallowing in the deeps. It was at this point that I wished I had my skis.

Once we got on the ridge proper, it was more windblown and the post-holing more manageable. Sometimes there were sections of hard ice hiding underneath the powder. Still progress was slow and it was looking doubtful if we would make the summit and get back to the car before it got completely dark.

A little over 4 hours in, we decided to call it quits around 6600 ft on the SE ridge. We were still nearly 2 miles and 1300 ft from the summit, so we did not feel like pushing it. With skis, we may have been able to push the time a little more because the descent would be so much faster, but there still is a ton of traversing on this route that wouldn’t be necessarily very easy with skis. Nonetheless, it was a beautiful spot for a lunch break.

The descent went rather quickly and we were even able to slip down the last 2 miles of ice-covered trail to the car. All in all, it was a fun, relaxing day and great reminder how tough post-holing through powder is! Time to bring out the skis!