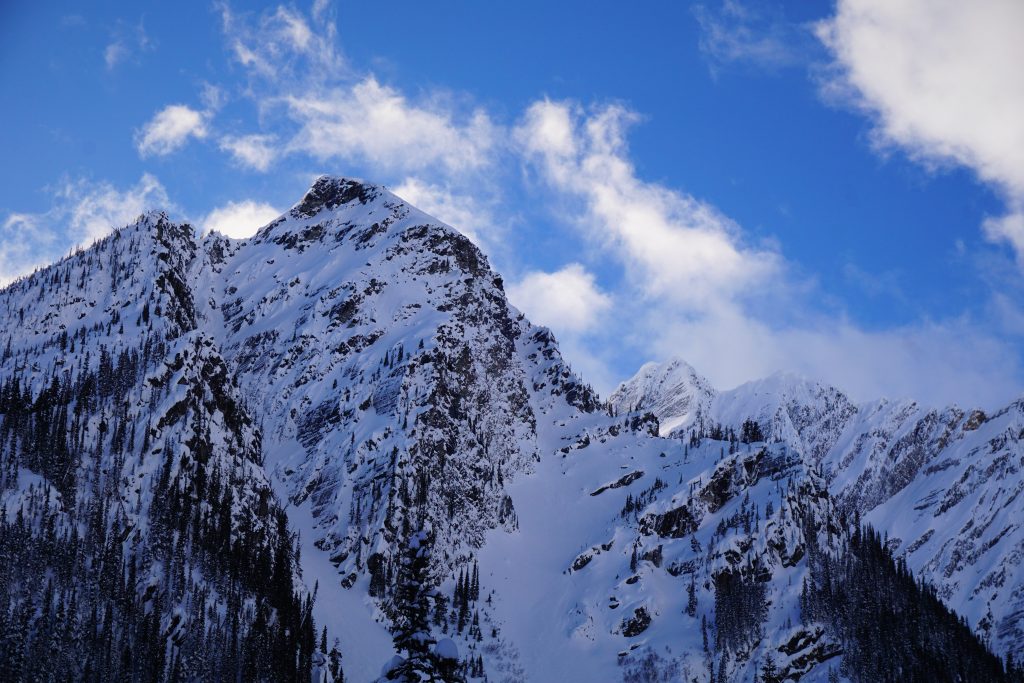 Brant, Logan, Nicole (one of Brant’s friends), and I showed up at the Discovery Center at Rogers Pass only to discover that nearly all the backcountry zones in Glacier National Park were closed. There was a lot of snow the previous day and avalanche control (we were stuck at the Asulkan trailhead for 2 and a half hours in the evening), but I guess the avalanche control was to continue all day the next day. Unfortunately, this prevented our original plan of McGill Shoulder, but one of the rangers convinced us to give the Teddy Bear Trees a shot. It seemed to have pretty minimal avalanche danger and was supposedly great tree skiing.

The skin up the valley towards Teddy Bear Trees was pretty easy. It was somewhat sunny outside and we were excited to get our first clear view of the giant mountains around us. They were epic.

Once we reached the bottom of the trees, we began a steep skintrack up. We were following another party’s tracks. Nicole did a great job widening out the kick turns, but I still struggled in the steep, deep powder. Time to work on my kick turns!

Towards the top, we were really struggling and even Brant was slipping. There was nothing cuddly about these trees! Eventually, we reached a spot where the trees really opened up and we decided it was a good spot to transition. The slopes were probably a solid 40 degrees. The first few turns were open and deep powder. They were a blast.

Further down, the forest got thicker. The skiing was still good, but Logan and I were just not in shape for the thigh burning turns in deep powder between the trees. Combined with the steep uphill, we were exhausted. We had to stop every few hundred feet to prevent leg cramps.

After a nice lunch break, we decided to do a second lap up. Initially, I had some pretty bad cramps but they slowly went away. We did not climb quite as high this time. We took some great turns in open slopes on the edge of the Grizzly Slide Path. Without all the trees, the skiing was much easier and we even were able to fly back down the trail to the car without ever breaking stride!

It was a short day, but we were still tired! The steep skintrack and deep powder really caught Logan and I out of shape, but it was still worth it for some awesome turns. Not a bad second day in Revelstoke!