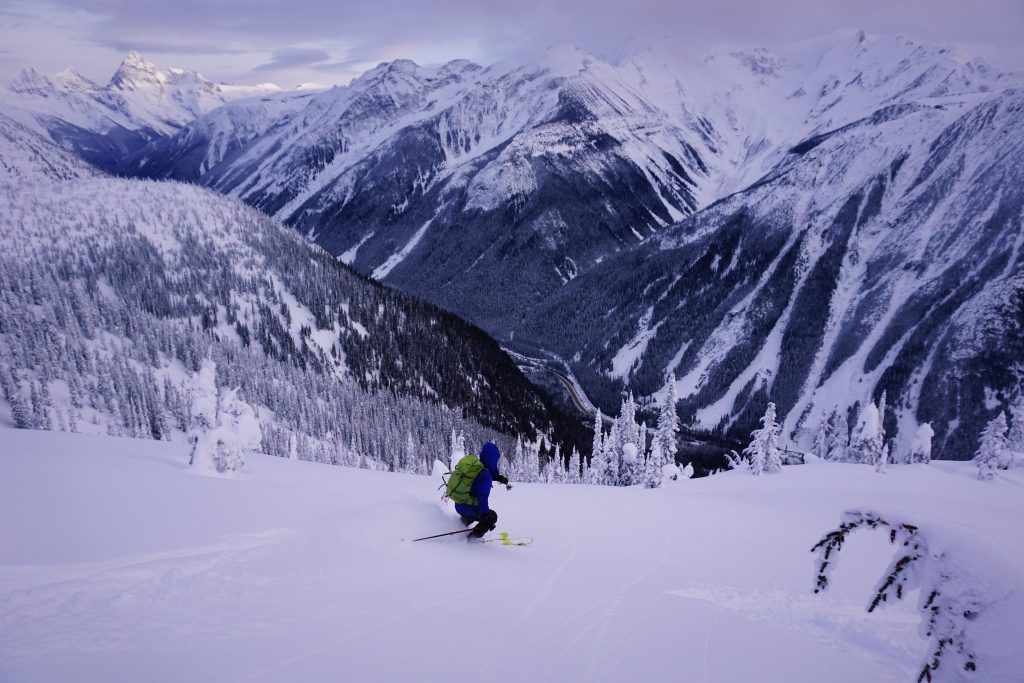 After widespread closures sent us to the Teddy Bear Trees the day before, we were relieved to see that all zones were open and we could go to McGill Shoulder. This specific area required extra permits, so we had to drive the extra 10 miles or so to the discovery center, but at least we were rewarded with a lovely sunrise.

At the Bostock Trailhead, we curiously watched four guys get out of a car, put on their ski touring gear and pump up a raft. It was barely -10C outside, but then they picked up the raft and ran across the road with their ski gear. Seemed like they were going to float the river to get to some untracked powder on the other side. Hardcore!

This tour started at a lower elevation than most in the Rogers Pass area, so the snow felt distinctly spring like down low with lots of logs and branches sticking out. There was a sudden transition to powder snow and the sun even came out.

With how Brant had described this tour, we thought it would be a pretty short skin up the shoulder, but soon we realized we were in for the long haul! We were not complaining though as we finally approached the treeline. For the first time, we had clear views of Cougar, Sir Donald, and the other impressive peaks in the area. Snow and ice crystals sparkled in the sunlit air. It was magical.

Reaching an elevation of a little over 2000m, we found a good spot to drop onto the west facing slopes of McGill. We made a hard traverse skier’s right before taking some awesome fall lines. I believe we skied down the “Gunbarrels”, some open chutes that looks like perfect ski runs. The powder was incredible (and of course, untracked) and there were great soft pillows everywhere.

When the open run finally concluded, we decided to skin up and try to traverse back to the shoulder for another lap. Brant led the way through some deep powder and we eventually reached our old skin track. As we neared the top of the shoulder once again, high clouds surrounded us, filtering the sun and giving the sky a soft yellow glow. The mountains changed mood around us. The dazzle and sparkle of the morning was replaced by a sense of simple serenity.

For this run, we decided to first take a few turns right back down the photogenic shoulder. Surrounded by incredible peaks and hundreds of ski lines, it was quite a scenic spot.

We eventually ducked into the steep trees on the west face. Despite many parties between our first and second runs, we still found vast expanses of perfect untouched glades. Brant, of course, found another jump.

Unfortunately, all good things must come to an end. Eventually, the virgin powder gave way to crusty snow and poorer coverage. We dodged our way through the rapidly disintegrating forest. At one point, I even skied on top of a fallen log for a good distance, channeling my inner park rat! Our legs were on fire, but this was survival skiing, so there was no relent!

Finally, we reached the Bostock Trail, which would give us passage back to the car. For the next kilometer or two, we flew down a 2 foot wide icy path at terrifying speeds. It was too narrow to turn or slow down, so exhausting pizza-ing was the only way to keep speed down. Just when we were almost back, I failed to make a tight switchback in time and slid out into a tree. I came so close to making it the whole day without falling…

With nearly 5,000 feet of vertical, we were once again beat but had big smiles on our faces at the parking lot. Another day and yet another step up in the quality of skiing! We could not wait for the Asulkan Hut!