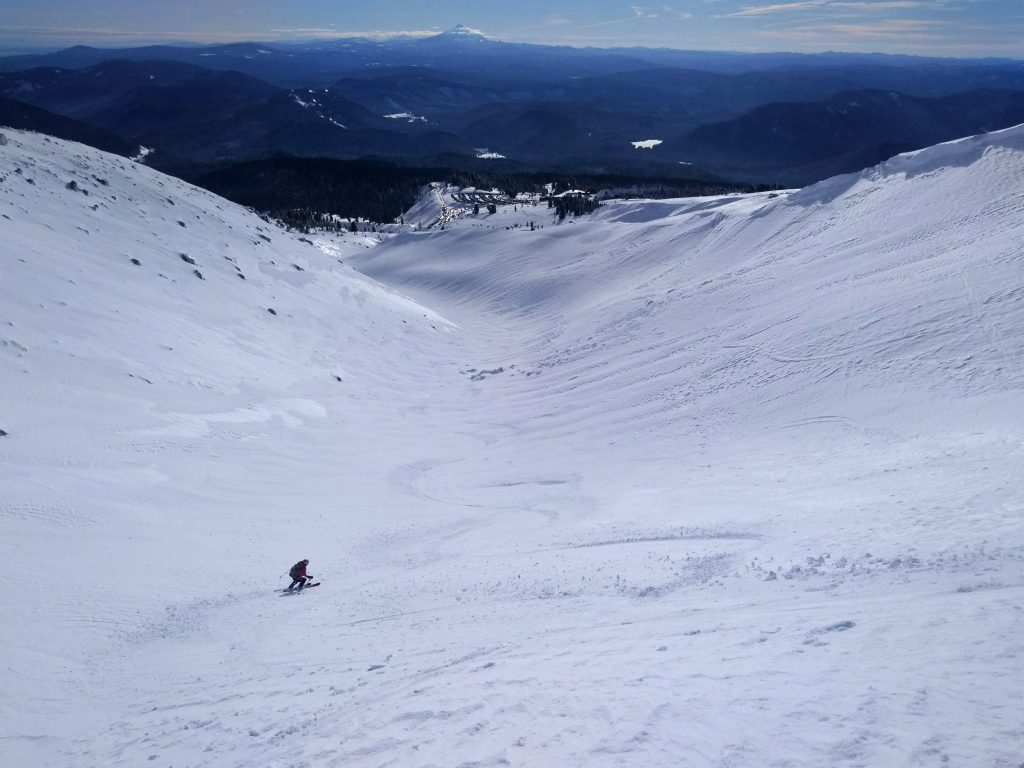 Starting the New Year Off Right

Kyle and I were invited to come spend New Years with our friends Patti and Ben to ring in the new year.  After skiing under the fireworks at Alpine Meadows the night before, we decided to take the next morning slowly under the beautiful blue skis.

Touring near Timberline has great access.  The skin tracks move up the right side of the resort, just outside ski area boundaries.  Parking at the lower parking lot, you can skin up from the car.  There was an inversion, so we were nice and toasty skinning up!

A few days before, Mt. Hood experienced freezing rain.  This left for some awesome tree and rock ice features!  However, the snow conditions also had a layer of ice hiding below an inch of snow.

On our first lap, we skied down the skiers left of the skin track.  There were lots of bumpy exposed blue ice patches and ripples of wind blown snow.  This made it more interesting to descend down the low angle terrain; it kept us forward and on our edges.

On our way down, we noticed we could drop down into the small canyon for a couple steep turns even further to the left of the skin track.  There were some cornices forming on the drop in, and there were signs of instability on the biggest ones.  The snow in this canyon was much better than the ridge above.

On lap two, after watching some cute engagement photos, we descended a very similar line to our first.  Kyle decided to huck of few cornice drop-ins, while I tried to keep my skis on the ground.

Finally, on our final lap down, we decided to move into the canyon further to the left; we later found out this was the Salmon River Canyon.  With snow starting to build up and stick to my skins in the warm temperatures, we decided to drop in halfway up the canyon.  This was by far the best skiing of the day! We should have started and stayed here the entire time! The snow was much better, most of the ice was covered up, and there were very few tracks.  It appeared that most of the back country skiers were scared to ski beyond sight of the skin tracks.

This canyon opened up to moderate slopes.  Unlike most gullies that are narrow and fast, this wide canyon allowed for beautiful GS turns in complete control.

Overall, we could not have asked for a more beautiful and relaxing way to welcome the new year.