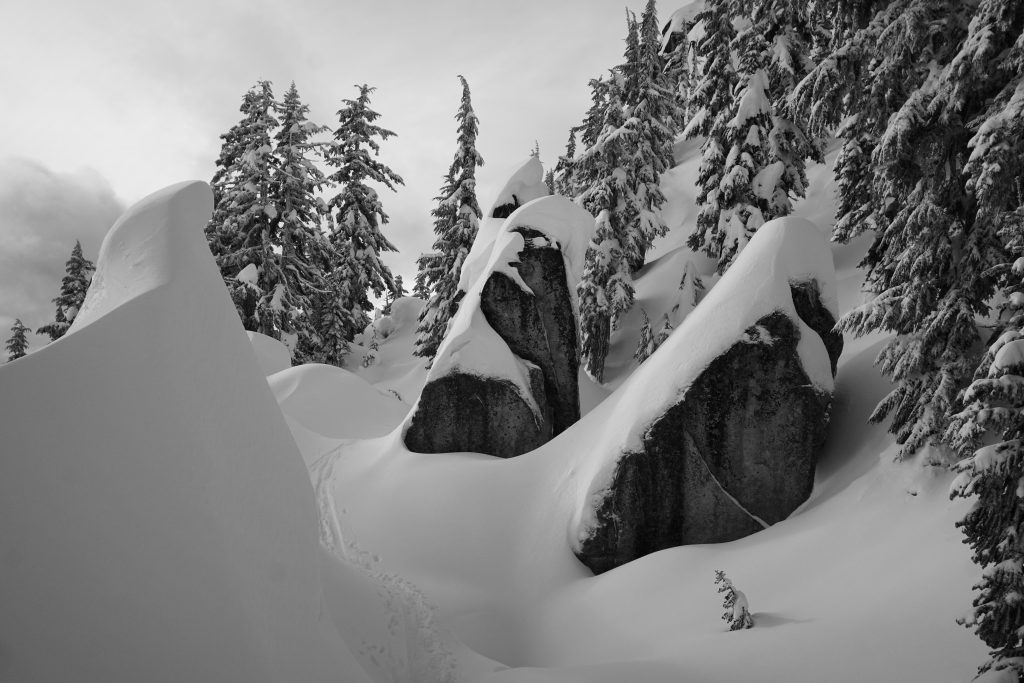 The weather going into the tour was classically unpredictable.  It had rained an inch on Thursday, iced over on Friday, and snowed enough of Saturday to produce a great day of skiing!  What more could you expect from the Cascades?

With considerable avalanche danger above tree line, we decided to try this classic beginner tour.

When we parked across from Stevens, we were asked if we were skiing or hiking.  If you are skiing (as in bounds at Steven’s Pass), the lot costs $20.  If you are hiking, snow shoeing, or back country skiing, it should be free.

The skiing up the forest service road was cruiser.  There was a nice skin track, and it took us a little over an hour to reach Heather ridge.

At the pass there were some tracks that headed down the lower angled trees.  We decided to take the ridge line up higher.  We turned to drop in slightly near the rock garden.

We found a chute that did not appear to cliff out.  Later we realized this was the chute that formed at the low point in the shoulder.  There were no sign of tracks, so I made two ski cuts before descending down the narrow path.

At the bass of the run there was a nice pillow field.  I tried to find a smooth line, and Kyle tried to sail over them.

After skiing to the bottom of the run, we saw another group headed up to Tye Peak.  They left us a nice skin track to the beginning of the ridge line.  From there, we booted up about 50 feet before the terrain widened enough to skin on again.

At that point, the summit was an easy push through snow flurries.

We took a conservative line down the south ridge before dropping down into the face.  The snow had a nice 8in layer of dry fresh snow over a hard packed layer.  It made for some beautiful turns.

We were able to find open glades scattered below the treeline.  It kept the fun up high the entire descent.

After lunch on our way back to Heather Ridge, we were able to spy our tracks from the distance.  It looked like we were the only ones to ski of the summit that day.

I took a break at Skyline, and Kyle took another lap down Heather Ridge.

Finally, after skiing past the flat Skyline Lake, we flew down the additional 1200ft to the car.  We still managed to find fresh tracks into the afternoon.

Overall, this was a great beginner ski tour.  The skin tracks were easy, the snow was light and fresh, and the views were beautiful.  And like always, the Cascades offer sick lines regardless of the presence of easier low angle slopes nearby.

One thought on “Heather Ridge to Tye Peak Tour”