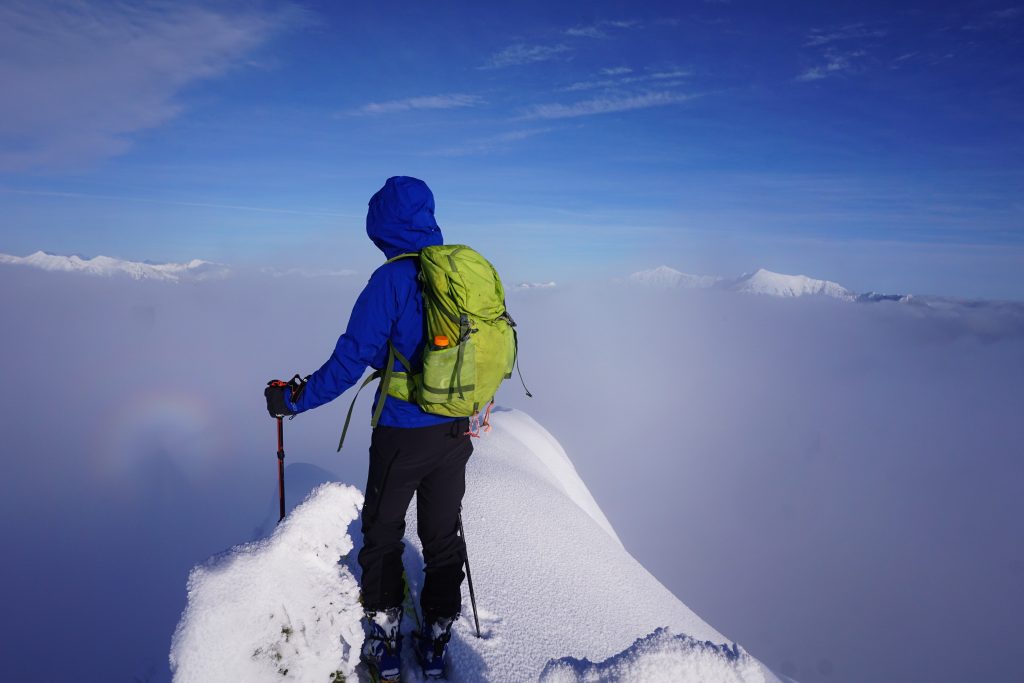 Searching for the Goods

Another week of wanna-be winter brought another rain event to the Cascades. I spent a lot of time on Thursday and Friday monitoring weather conditions and forecasts in the mountains and concluded that our best chance of good snow would be high north facing aspects near Stevens Pass. So Logan and I took off Saturday morning for Lichtenberg Mountain.

Lichtenberg is a semi-popular destination because of its proximity to Stevens Pass and attractive ski lines on all sides. We started up Smithbrook Road around 8 am, passing a few groups who were also headed to the same place. We turned off the road at the first switchback and began going cross country through crusty spring snow. We stayed low, trying to circle around to the north side of Lichtenberg. Eventually, we found ourselves curving around the NE ridge from Lichtenwasser Lake but within view of the road still! If we did it again, we would stay on the road a bit longer.

Once around to the slopes to the north of the lake, we cut some steep switchbacks and gained the lake. Despite the “partly sunny” forecast, the easterly flow had cold dense fog looming over us, obscuring the upper reaches of Lichtenberg.

Past the lake, we began up the gentle bowl to the southwest. As we gained elevation slowly, the snow improved and pretty quickly, there was no crust! However, the visibility did not improve. Towards to head of the basin, we cut a steeper skin track through some trees and finally an open slope to reach the col between the south and north summits at 5600 ft. It was windy, foggy, and cold so we quickly transitioned and skied back down into the basin.

At this elevation, the snow was not bad! It was a little heavy and slow, but much better than the mashed potatoes we heard Snoqualmie Pass was. We continued the run all the way down to 4900 ft through gentle open glades. The terrain in this bowl would be marvelous in good powder! We took a nice lunch break, hoping the weather would clear up.

When we reached the col again, it was still zero visibility, although the wind was not nearly as bad. We picked a different line and dropped in.

After a few turns, we heard shouting from below. We skied down to communicate with the other group. They had a broken binding and were wondering what the quickest way out was. I showed them the map and explained they could descent southwesterly from the col to Yodelin Place. Logan and I then continued our descent as the group tried to finish the climb with one poor soul having to boot up.

On our third time up to the col, we laughed at the destroyed skin track. The guy with the broken binding had put massive boot prints into the skin track, making things more difficult for us, but we could not complain! We caught up to the group as they finally reached the col. The fog was still thick, but Logan and I decided we were heading to the summit and skiing off to the north no matter what. As we skinned up the south ridge, the sun started to come out but we were still very much in the fog.

We could tell we were getting close to the top of the clouds, but we needed the summit to be just a few hundred feet higher! We reached the top, but were still just barely in the thick of it. Logan found a stem boulder problem.

We opted to hang out at the summit for a little while in hopes of views. It became a game of hide and seek. Every few minutes, the clouds would briefly drop in one direction and pristine white Cascade peaks would appear in the distance! And before I could even snap a picture, they would be gone. This continued for nearly half an hour and Logan and I had a great time trying to identify the peaks with only a few second windows. We saw Sloan, the Monte Cristo Group, Glacier Peak, the Entiat Crest, Rock Mountain, the Chiwaukum Range, and the Stuart Range (but never all at once)!

Interestingly, we also had the only tracks up on the summit all day. We guessed that other parties had attempted the northeast ridge route, only to be stymied by the knife edge snow. Later, on our way out, we would confirm that.

After a good time up there, we decided to say goodbye to the lonely giants of the Cascades and drop onto the north face. It looked steep and misty. Logan ski cut the slope and proclaimed powder. Against all odds, we had found the goods! The first few hundred feet were wonderful steep powder. The north aspect came through for us.

After a little bit, the snow quality went back to decent, and below 4500 ft, it once again became quite crusty and difficult to ski. However, after only a little thrashing, we passed some more groups on their way out, found our way across Smithbrook and poled our way back up to the snow-covered road. A few minutes of uphill skate skiing got us over the hump and it was all downhill cruising from there!

One thought on “Lichtenberg Tour”