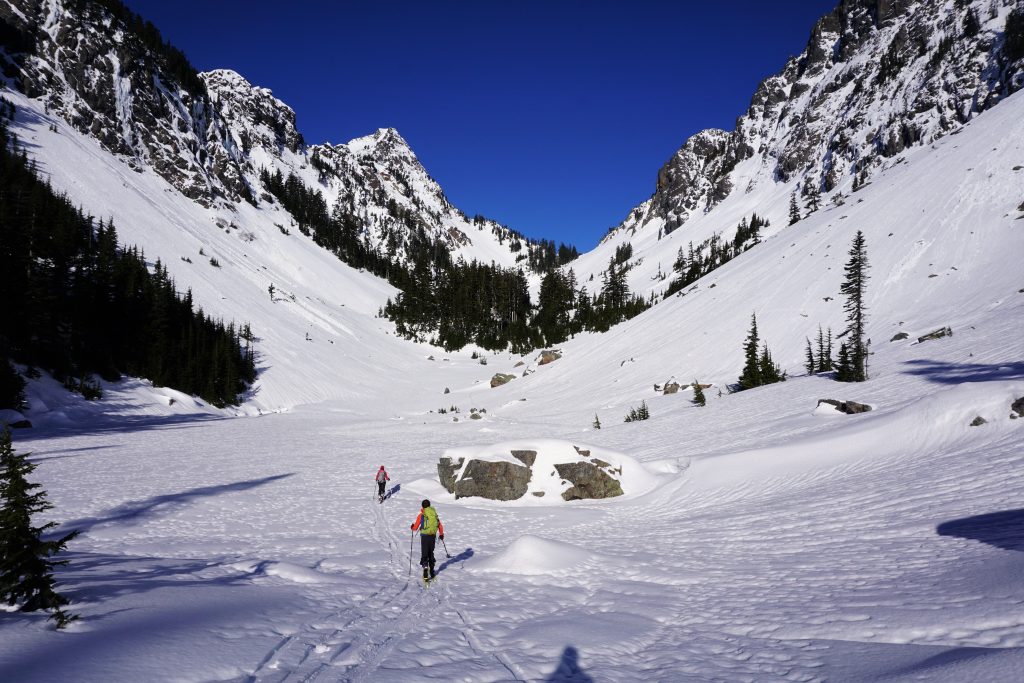 The Best and the Worst of Ski Touring

Going into this trip, Logan, Kylie and I had two certainties: the weather would be sunny and beautiful, and the skiing would be crusty and awful. Both proved true. The question was simply this: which reigns dominant, good or bad?

Logan and I had completed a long form semi-circumnavigation of Chair Peak back in November from the Pratt Lake trailhead all the way to the Snow Lake trailhead on foot. This trip would be a tighter loop, and much different in nature. If all went well, we were hoping to also get in a summit of Kaleetan Peak.

We left the Source Lake trailhead around 8 am, surprised by the groomed nordic track. We dutifully followed the “uphill traffic” signs. There was a suspicious looking skin track, but it had a clear “no uphill traffic” sign so we obliged and followed the groomed track to a creek bed. From here, the paths diverged into a maze of snowshoe-destroyed skintracks tightly weaving through the valley bottom. After a good 20 minutes of struggling, we popped out on the main skin track, which appeared to be the track that originated from the “no uphill traffic” sign! We were enraged! The sign was totally wrong! It is not like anyone would be coming down that track so early in the morning, and they should not be going so fast anyways that collisions would be a concern.

At Source Lake, we emerged above the fog and started following a skin track up towards Great Scott Basin. Since this is supposedly a “beginner tour”, we expected an easy skin track, but instead it traveled steeply back and forth up a shallow gully. Many people had side-slipped back down this gully, obliterating the skin track. The morning was very icy, and we were slipping around everywhere. It was quite frustrating, but eventually we emerged into Great Scott Basin, a little behind schedule. This tour was not going well!

As we entered the sun, we stopped to apply sunscreen and enjoy the wintery/spring views of the Alpental valley.

We followed the now quality skin track underneath the cliffs of Bryant Peak and then through a few switchbacks to Bryant col. We were glad we were not doing this part in the afternoon since there probably would be ice fall and rock fall in the warm sun here.

From Bryant col, we began the ski down to Melakwa Lake. The skiing was difficult on a variety of surfaces: firm crust, breakable crust, avalanche debris.

The highlight of this descent was looking up at the west face of Bryant Peak. I have never heard of any climbing routes on this face in any of my guidebooks or online research, but it had some nice icy lines, all of which had more ice than the super popular NE Buttress of Chair Peak!

Lower down, we had to trend skier’s left to avoid some cliffs. When we reached Melakwa Lake, we could see that the descent was actually pretty cliffy.

We took a snack break in the sun and then started skinning up the Melakwa Basin. We really love this basin, walled in by Kaleetan and Chair Peak. It feels so lonely and remote, yet is really super close to Snoqualmie Pass.

On the left above Melakwa Lake, we saw some big (by WA standards) ice flows! Logan and I had noticed them back in November, but they were definitely climbable now! Just like Bryant, I can find nothing about these ice flows, which is very surprising considering their proximity to Alpental.

As Logan and I gawked at all the ice lines, Kylie zoomed ahead up the basin. We regrouped at the base of the southeast couloir of Kaleetan. This was a possible ascent route that Logan wanted to climb and ski to get to the south couloir on the upper half of Kaleetan Peak.

At this point in the day, we realized we had time to go for it, but would mean a long day. We also could not tell how the exit of the couloir would good, as a cornice seemed to overhang the top, but there also appeared to be a way out to the right. We spent probably a good 10 minutes waffling and eventually decided to head up. We skinned a ways until we had to put the skis on our packs and boot up.

As I neared the cornice, I looked for a way around it to the right. The snow got pretty steep and the final little wall was probably 55 degrees. I got about halfway up the final wall before we decided that we should probably turn back and return some other time with a rope and a harness to rappel back in once on top of the couloir.

We all downclimbed to where the couloir was a little wider and pulled out a shovel to dig a flat bench to put our skis on. After getting our skis on, we took turns one by one skiing down. It was maybe 40-45 degrees at the steepest and 20 ft wide at the narrowest. The snow was actual pretty good, soft and sugary. As we reached the sunlit apron of the couloir down low, we found nice corn snow. It was by far the best (and only good) skiing all day!

A short climb brought us up to Melakwa Pass, where we were greeted with a familiar view of Chair Peak Lake, Mt. Roosevelt, and Glacier Peak. We took our lunch break here.

The ski down to Chair Peak Lake was difficult. There was a semi-firm crust that usually supported your weight until you decided to turn, where an edge would catch. I think each of us fell once on the way down. At the lake, we had to put skins back on for a short climb over the knoll towards Roosevelt.

The descent down to Snow Lake was even more difficult than the previous descent. We alternated between huge piles of avalanche debris and awful, awful breakable crust that made every turn an adventure. We found the easiest skiing to be when we skied down the hard ice layer that was revealed after one of these recent avalanches during the rain on Thursday.

Once at Snow Lake, we began the mile long journey across the lake. Logan and I tried one skin on, one skin off, but found it to be tiring to the leg without a skin. There is something about Snow Lake’s geography that facilitates incredibly strong south easterly winds out of the Alpental valley on easterly flow days like this. So we had an intense head wind, but still managed good time. Something felt strangely epic about crossing this massive lake with wind so strong we could hardly hear each other.

We had just one more climb back up to the Snow Lake Divide. From here, we had a clear view of the NE Buttress of Chair Peak. We saw multiple parties on it. Apparently it was so crowded that people turned back… and there was maybe 20 ft total of ice on the route.

The descent to Source Lake skied much like a skied-out in bounds bowl. In other words, it was better skiing than most of what we experienced throughout the day! From there, we took the “real” skintrack and easily flew back to the car with little issue, arriving just before 4 pm.

All in all, we agreed that the good outweighed the bad. Despite the awful skiing that kept everyone else away (we saw no one else from Source Lake all the way to Snow Lake), we had a great time and saw a lot of the amazing terrain that the Snoqualmie Pass backcountry has to offer!

One thought on “Chair Peak Circumnavigation”