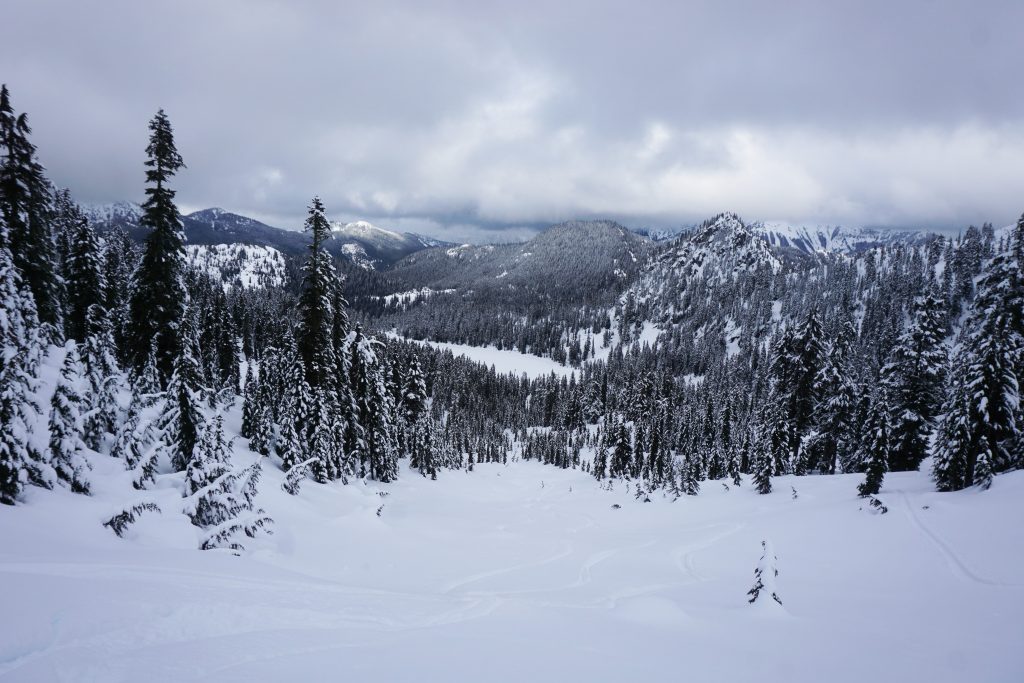 If the skiing is good, you might as well go twice. (And probably again.)

A few weeks ago, Logan and Kyle went touring off the Northeast face of Lichtenberg. This time, I got to join them in our attempt to find powder over crust.

When picking the location of the tour, Logan and I out voted Kyle to ski the less powder coated slopes of Steven in comparison to the heavy snow of Baker. We were hoping to ski some more aggressive lines with less avalanche danger.

To get up to Lichtenberg, you need to skin along the forest road for 3 miles, cut up through the trees to reach Lichtenwasser Lake, and then climb up the bowl to the ridge line.

The skinning up to the lake was pretty tough. It had not snowed much below 5000ft the night before, and most of that snow had gotten caught in the branches of the tight trees. This made the skin track icy, and it was punctured with old frozen snowshoe tracks. Fortunately, after this morning trek, the day got much easier.

The lake was beautiful! I love skinning across frozen, snowy lakes.

Since Kyle and Logan had already skied in this location, they knew that it was best not to follow the beta up the ridge line to the summit of Lichtenwasser. Instead, we took a more direct approach up the open bowl and gully. (I would only recommend this approach with minimal avalanche danger.)

It appeared that we were the first party to ski the area since the week of snowfall. Kyle and Logan kindly volunteered to lay down skin tracks for me.

After battling our way up the final bowl and through a gap in the large cornices, we were ready to finally ski. The snow was becoming extra difficult to skin in at the higher elevations because it was not bonding to the crust below. As a result, I felt like I floundered through the sliding powder to gain the last couple hundred feet.

Hopping off the first entry cornice, I miss estimated how quickly the snow was going to move under my feet, so my weight was way to far forward. I wiped out in the powder, lost a ski, and slid halfway down the slope. Kyle had to take a lame line to fetch my ski for me. But if you are going to crash, light powder is the place to do it!

The rest of the run was nice, low angled, gladed trees. The three of us flew through them.

After a quick lunch break, we followed our skin tracks back up with the other two parties. We were providing tracks for everyone!

We decided to ski down the Northface of the South Summit because it looked super open and fun. We loured a few parties over with our beautiful skin tracks away from the true summit to this awesome bowl.

For our last lap, we wanted to ski off the North Summit back down to the forest road. It was good this was our last lap because the skin track through the tree glades was starting to fall apart. Logan had not set the highway with the mindset that it would serve multiple parties throughout the day.

Another party had accidentally followed up to the South Summit, then made a sharp switch back over the cornice to the North Summit. This was nice because my crash off the first run had completely ruined our original skin track to the ridge line.

We followed them up through the cornice gap. I had to take my skis off, but Logan and Kyle made it up with their mad skinning skills. At this point in the tour, the glue on my skins stopped adhering to my skins. Kyle stayed close to me below the fall line to catch me if I started to slip down the Northface.

When we got to the summit, we quickly transitioned to ski down the steep slopes. The view was really nice from the top; we had a great line of sight with the clouds forming above us.

The turns off the summit were in nice loose snow. We were feeling confident and strong on the steep lines; this made for some great turns!

Kyle had deeply studied the map, so he was confident that we would be able to find a couloir through the cliffs if we wanted to take a more aggressive line.

We took the approach that it was best to take the more challenging line that we knew would go to the bottom. Kyle looked over this drop in and took the first turns into the chute. It was great we entered at the beginning of the feature because all other parts of the face exited into cliffs.

This was the best skiing of the day! I had a blast skiing down this beautiful chute. It was in beautiful snow, on beautiful terrain, and it continued for about 800ft!

The next two pictures crack me up. Logan has to work so much harder with his skinny, light skis in the Cascade powder. But he never complains!

Once we finished the chute, we skied through a pillow field and into some tight trees. We followed old snowboarding tracks back to the road. Finishing off with 3 miles of low angle skiing back to the car. It was a super fun trip!