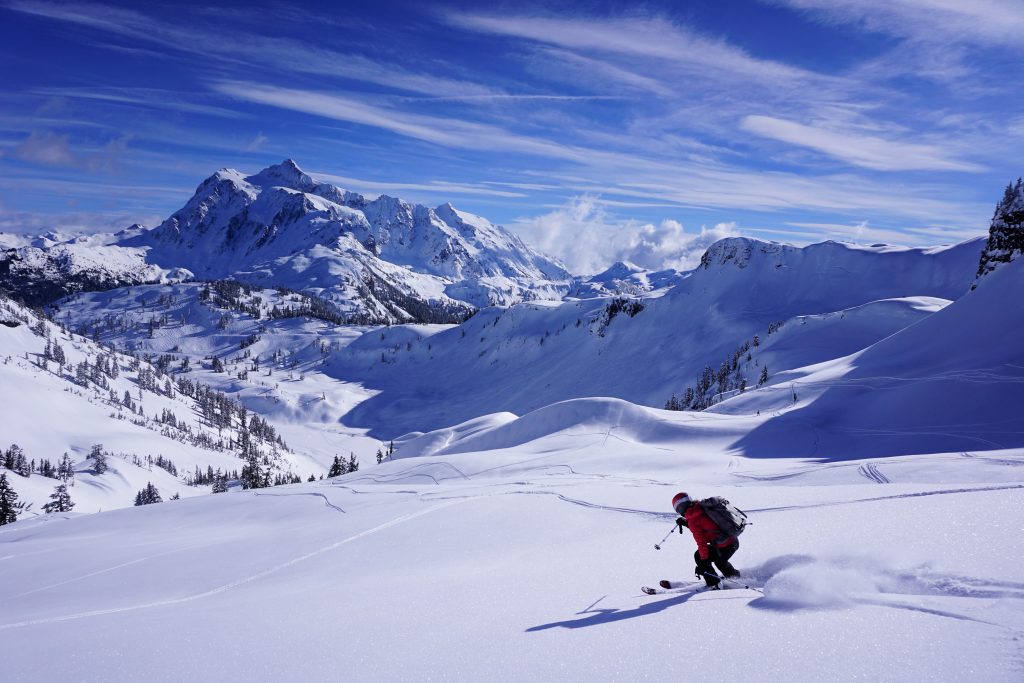 A Wonderful Introduction to the Baker Backcountry

For the Holiday weekend, Kylie and I decided to head up to Baker. With the sketchy avalanche forecast, we skied inbounds Saturday with some friends. We watched people ski some aggressive lines on Shuksan Arm and Herman without any signs of instability, which made us feel better about going into the backcountry Sunday. So Sunday we returned and headed off to get our first taste of the famous Baker backcountry.

We decided to start out by heading to Herman Saddle and checking out the terrain by Iceberg Lake. The skin track up to the Herman Saddle is relatively sheltered, but still exposed some. The sun was coming out and rapidly warming the air. It was a beautiful morning. We knew it was going to be a great day.

At Herman Saddle, we went another hundred feet up to the right to a transition spot. Here we had a wonderful view of Mt. Baker, so close, yet so far.

For our first run, we took a conservative line down and to the right to Iceberg Lake. We hit a little breakable crust in a few places, but as long as we avoided steeper southern aspects, the snow was nice consolidated powder, making for fun turns! The terrain was so much fun, with lots of little rollovers and widely spaced trees.

Iceberg Lake was smooth and untracked. Baker was framed perfectly in the outlet. It was a great place to take a little morning break.

We took the nice skin track back up to Herman Saddle and our first transition point. This time we skied down to the left, staying closer to Table Mountain.

I spied a nice cornice drop while we were skinning up and decided to go check it out. The drop was probably about 12 ft with a nice soft landing. It was so good I had to do it twice!

The rest of the run was silky. The snow was more shaded and thus drier.

After skinning back up to Herman Saddle, we decided to traverse over to Mazama Bowl and check out those runs. Partway across the short traverse, we realized we were skinning across a perfect, untracked sunny 20 degree slope. So we decided to rip our skins and take a quick run back down towards Bagely Lakes. Best impulsive decision yet!

We took a quick lunch break down low before skinning up to the Mazama Saddle for real. We had to do a few tight kick turns near the top, but it was not too bad. The Mazama Bowl is a very gentle 30-35 degree bowl leading down to frozen Mazama Lake. I found another perfect cornice drop in, landing in control and skiing the whole run at high speed through cold, preserved north-facing powder. It was 30 seconds of heaven.

It was such a good little run that we decided to run another lap. Everyone else was leaving the bowl at this point in the afternoon, but we took a second run, starting a little up higher at a gap in the cornices. We stayed skier’s right, getting fresh tracks the whole way down.

When we got back up to Mazama Saddle, it was late afternoon and time to head out, regretfully. We traversed skier’s left on skins to a south facing ridge.

Unfortunately, the crust had refrozen already even though the sun was still on the slope. We still had some good turns before traversing hard right to get to the more shaded northern aspects. These slopes provided great skiing all the way to valley floor, where we were only a short skin from the car.