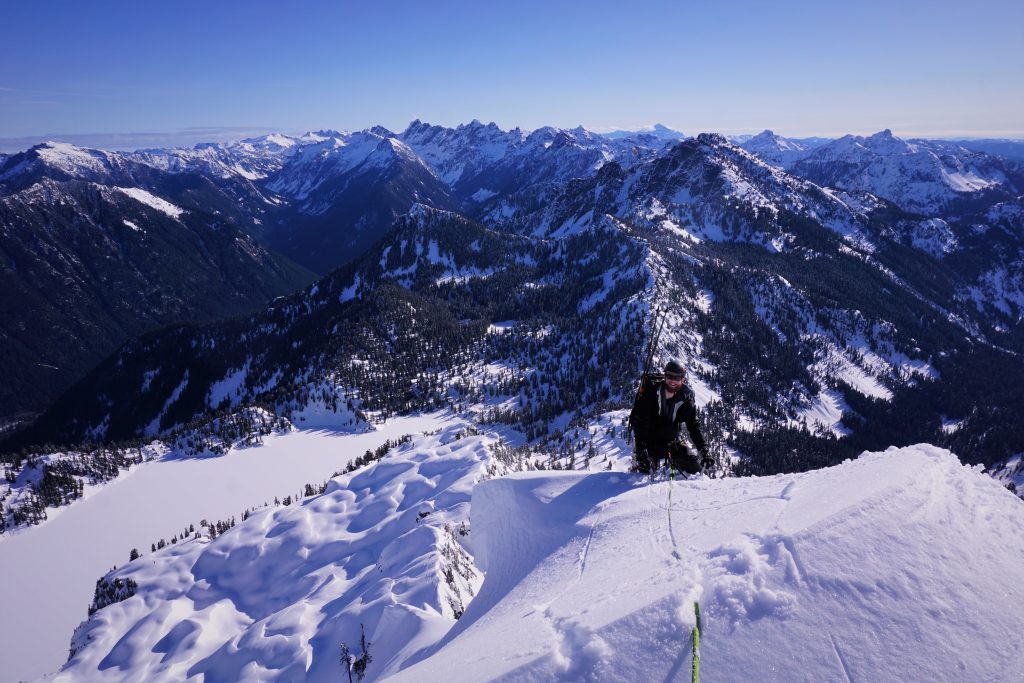 The NE Buttress of Chair Peak is undoubtedly a classic winter route locally. A short approach, an aesthetic line, and relatively easy climbing create crowds on what is probably the most popular alpine ice route in all of Washington. Jacob and I had put up the route on Bryant Peak, Hot Tubbs (WI4), largely to try to prove that there are other great climbs in the area. But this time, we found ourselves looking for a quick-hitter before spring claims of the death of ice in the Alpental Valley, so we planned on running the classic ourselves.

We left the Alpental parking lot around 5 am. Jacob has just gotten his ski touring gear and it so much nicer to approach and descend on skis than snowshoes! The skinning was a little slick above Source Lake, but we had little issue getting up to Thumbtack Rock around 6:30 am, just as it was getting light.

We decided to leave our skis here and approach the rest of the way on foot. Within the first few steps, I knew it was bad. I was sinking at least knee deep every step, and the snow was very heavy, making it painful to drag my leg to the next step. The climb was still relatively far away. We began to wonder: should we bail? How long will this take? Should we just carry our skis on the climb and use them for the rest of the approach?

As a prime example of the sunk-cost fallacy, we continued on, breaking trail through sometimes waist deep mush. As the snow got steeper towards the notch in the ridge, progress became nearly impossible. The post holing was so deep that I could not get my foot above the snow for the next step! Ultimately, I had to break out a shovel to clear snow in front of me. It was one of the most exhausting and frustrating experiences of my alpine career.

We reached the base of the route itself a little before 8 am, well behind where we had hoped to be. Luckily, there was some cloud cover, buying us extra minutes before the satanic sun came out.

I led off to the left, with Jacob simuling behind me on 30 meters of rope. The traditional route goes up the “S Couloir” on the right, but you get more ice if you go left! Once I got onto the left ice flows, it was really fun climbing! About 30 meters of consistent 70 degree ice with surprisingly good protection.

After the ice section, I pulled up onto a long snowfield with no real protection for a few hundred feet. The sun had come out and roller balls of snow started peeling off the upper rock faces, gaining size down the snowfield, and showering Jacob beneath. We moved as quickly as we could since it was getting warm already, but the awful post holing once again made my progress slow.

Eventually, we reached the base of the crux ice flow and I made a screw anchor to bring Jacob up. He racked up and then sent the crux, pulling the 6 ft. vertical ice step with ease!

We made a short pitch of this, and Jacob belayed me up through the crux on some bomber pickets, the only good pickets we got in.

From here, it is just more snow slogging to the false summit, where we regrouped.

We took a short break here to soak in the views. It was hot out! It was about 10 am, so we sent the route, usually 6 pitches, in just 2 hours.

From here, the true summit was a steep 30 ft snow climb away. I traversed over and tried climbing up, but the post holing was really bad once again and a shovel was likely required to move higher. I was so done with the awful snow conditions of the day and we wanted to get down before things got warmer, so we did not bother.

From here, we descended down the gully to the south, which led to the rap anchor.

We made a single rappel with a 60 meter rope through a gap in the cornice into a tight south-facing descent gully. Sloughs were coming off intermittently, so I left an intermediate rock anchor Jacob could use when packing up the rope and booked it down the gully. Fortunately nothing came down on both me and Jacob. We were very glad we got down before the true heat of day, because loose wet avalanches were dropping off everywhere by the time we got back to our skis!

We were relieved when we put on our skis and said goodbye to the post holing. We carefully skied down from Chair Peak Basin through wet, heavy mush. I ski cut a few small chutes, triggering some small shallow wet slab avalanches, but nothing too concerning. The final descent to Source Lake was exhausting and heavy, but Jacob did not complain one bit as we coasted the last bit back to the car. For a fist year skier, Jacob is super impressive! Despite the awful skiing, Jacob declared “I’ll never go back to snowshoeing!” Conversion successful!

Overall, we were psyched to get the NE Buttress of Chair on a beautiful day with the route still in good condition. We would have preferred colder temps, but a huge warmup is coming so we figured we would go early and get the ice before it was gone!