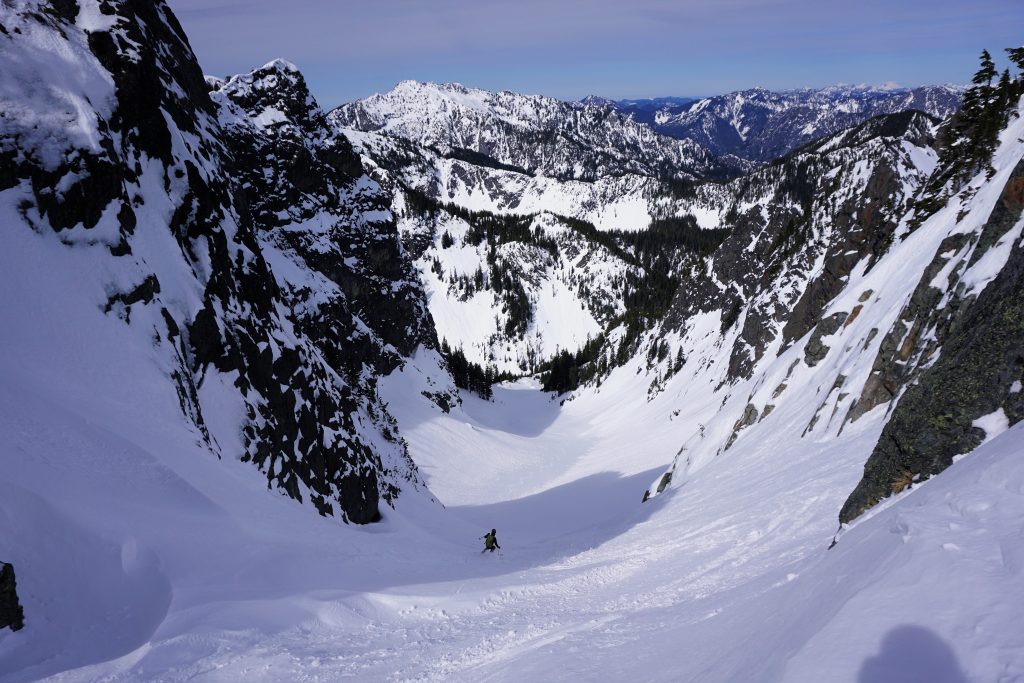 The Pilgrimage of the Alpental Backcountry

Holy Diver Couloir is the run in the Snoqualmie Backcountry that everyone knows about, but few have actually skied. It requires a full day no matter how you do it, but a long approach is nothing to scare us away. After climbing Chair Peak the day before, I knew that south faces were fried but north faces still held decent snow. So Kylie, Logan, and I planned a fun linkup of the north slopes of Chair and Holy Diver.

We left the parking lot at first light. Despite the fact it was super warm the day before on Chair, I did not think to bring ski crampons with the inevitable freeze overnight. The skin track was icy and destroyed by a booter, making for a slow ascent above Source Lake. It was impossible to know when your ski would just slip backwards. These conditions are very frustrating.

When we made it to Chair Peak Basin, we met two climbers who were debating about attempting Chair Peak. I told them my experience from the day before and given that the sun was already warming things up, they wisely decided to turn around and find an alternative. Hopefully they still found something fun to do!

A short boot up to the ridge led us to the wonderful north slopes of Chair. We skinned a short ways before planning our descent.

We took a fresh line through surprisingly good snow! The turns were not perfect, but pretty good considering the 50 degree temperatures during the day!

It was the second time in a week I had skied that run and my third time being up beneath Chair, but I could not care less; it is a beautiful area.

Once down at Snow Lake, the sun finally came out in full and began to warm us up greatly. We got our move on and started to head up Roosevelt.

The guidebook had recommended gaining the notch to the east of Roosevelt and taking the ridge up from there. It sounded like the safest, but not the easiest option. When we reached the ridge, it confirmed our hunch.

It was barely wide enough to skin, but even then, we were still forced to boot with serious wind loading on one side of the ridge and steep exposure on the other. I set a bootpack through deep heavy mush, having terrible flashbacks to the day before on Chair Peak.

From there, we were able to skin the rest of the way up easier slopes to one of the summits of Roosevelt. We took a well deserved lunch break here, tired from lots of difficult skinning and booting!

After a loungey lunch break in the sun, we ripped our skins and skied down to the entrance of Holy Diver. Interestingly there was only a single set of tracks down the beautiful couloir! It was wide, huge, and walled in by cliffs. This was going to be good!

After a bumpy few turns up top, Holy Diver was pure heaven. Wide, moderately steep, preserved powder, it was one of the most beautiful runs of my life. Steep rock walls surrounded us in this huge north facing cirque. It felt a world away from the hustle and bustle of I90 and Snoqualmie Pass. It was certainly a ways out there, but totally worth the pilgrimage to this classic ski run.

Further down, we cut right down the creek drainage, following it until it flattened out.

Down in the valley bottom, we put on our skins and began a long climb back towards Gem Lake and the saddle with Roosevelt. As we got higher, we began to pass a bunch of cool ice flows on the right. There were probably 6 or 7 north facing ice routes that appeared to be still in, despite the recent heat! Incredible! Yet another motherload of Snoqualmie ice!

In the distance, we also spotted some sick couloirs to ski. There’s a lifetime of exploration out here in the Snoqualmie backcountry!

When we finally reached the ridge, we were all pretty exhausted and took a good break. The descent down to Snow Lake was not too hard, but we had to choose our line carefully in the mid-afternoon heat, still triggering some wet slabs in little open spots.

Back at Snow Lake, all that was left was the familiar skin across the lake, the crushing final ascent, and the thigh-burning descent back to Alpental.

The day was definitely a tale of two aspects: difficult skiing and skinning on south faces, and the last vestiges of sweet powdery winter on the north aspects. It was a tiring but fulfilling day and fitting ending to both winter and possibly Logan’s time here in the Seattle area, as he is moving out to Wyoming and less tracked pastures in the coming weeks. Thanks for all the great adventures, Logan!