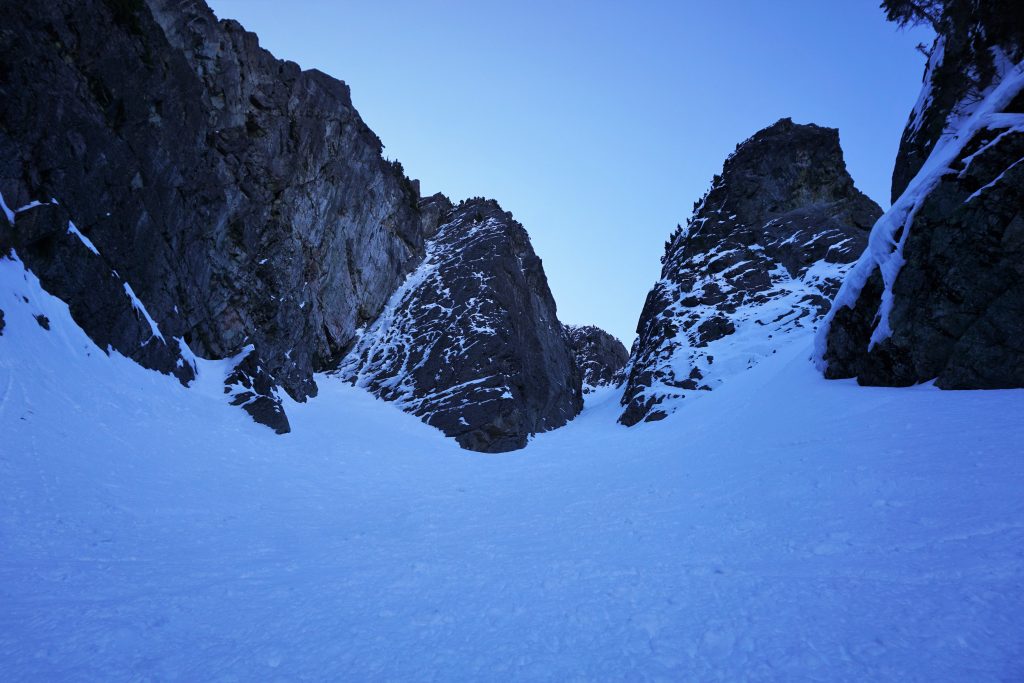 A Speed Lap on the Snoqualmie Classic

Early March was unusually cold, but late March held record breaking heat. Anthony and I finally got out to ski together for a quick morning lap on the Slot Couloir. Usually, the Slot Couloir, possibly the most skied couloir in Washington, has a huge line of people, but we knew that the recent hot weather would shrink the crowds.

Fortunately, there was a decent freeze the night before and it was ski crampons from the start. The steep section next to the Phantom Falls was actually completely melted out for like 5 ft, necessitating a short boot. From, there we zoomed up one of the gnarliest skin tracks in the Snoqualmie Backcountry due to the firm snow and ski crampons. Anthony is wickedly fast! He had his speedsuit and race boots on, prepping for a skimo race the next weekend.

As we entered the open more above 5000 ft, the angle got above 30 degrees and it was very icy and bumpy with avalanche debris. I really struggled with the kick turns, relying heavily on my whippet to not slide down, but Anthony had little issue. It has been a while since have been the weak link by a good margin! Still, we reached the top of the Slot Couloir in just 1 hr 45 min, much faster than the usual 3-4 hrs!

The entry to the Slot is a little tight and intimidating, but once you’re in, it’s fine. There was a tiny dusting of fresh snow up high, but otherwise kinda chalky and firm. Not too bad considering Seattle had hit 80 degrees recently!

The setting of the couloir was extremely beautiful and wild considering I90 was just a stone’s throw away! The Slot peers 4000 ft down the deep gash in Snoqualmie Mountain into the Middle Fork Snoqualmie. Verglas ice lines surrounded us on the north facing rock walls.

The bottom fan was frozen avy debris, so not very good, but overall, we were pleasantly surprised by the skiing conditions! We skinned up at the base and returned up to the exit notch.

We knew the descent would be a battle, but it started out well enough, with some nice softening snow. A little bush thrashing led us to the Phantom Slide Path, which was more melted out that we hoped. We hopped off a few rocks and made sloppy turns through sloppier snow before diving back into the forest. Coverage got thinner and thinner until we had to edge down some tree roots.

Still, we kept skis on all the way to the car! Spring has arrived in a hurry here, but it was awesome to sneak in the classic Slot Couloir before it melted out even more. Usually most of a day, the whole tour only took us 3.5 hours, thanks to the speedy guy in front of me. Thanks for showing me the Slot, Anthony!