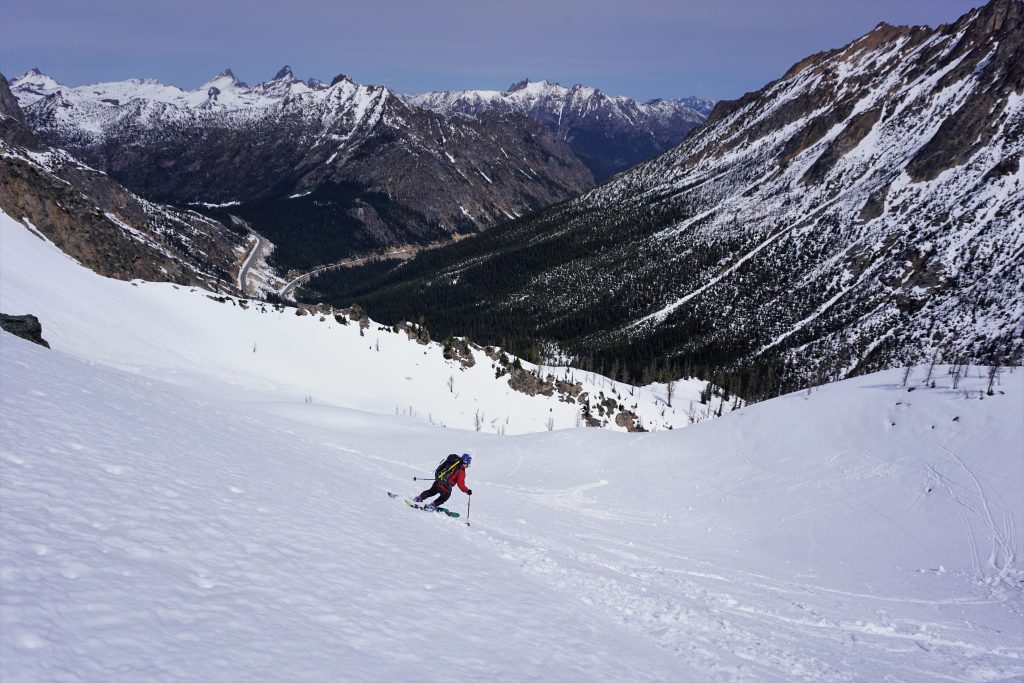 The Birthday Tour is an easy, straightforward ski tour at Washington Pass. And after getting roughed up on the NW Corner of North Early Winters Spire the day before, it was exactly what Jon and I needed.

Although the tour is just a half day long, we still got up at first light because we knew how hot it was going to get during the day. We made some oatmeal at the car and then started skinning from the Blue Lake trailhead a little after 6 am. High clouds kept the sun from doing its devilish work so early, so we did not skin too fast. I think we were both just kind of physically exhausted from that wide crack the day before.

The huge cornice is somehow hanging in there, even after weeks of heat, but it is definitely sagging a lot. I would not want to be underneath it in the middle of the day. We booted up just to the left of it to the Blue Lake Peak col.

At the col, we took a nice morning break. Here we met two other tourers, Brad and Kyle. Brad had just run 40 miles of the Sun Mountain 50 the previous day before getting heat exhaustion, but apparently was still down for a little ski tour the next day. He was doing 50 ultra marathons for his 50th year in life! Incredible! Kyle (also half-Chinese) had just finished multiple weeks skiing in the Sierras, including a two week trip similar to the Sierra High Route, just like I did last summer!

They found Jon and I a funny pair. I was rocking the skimo vest pack and super light skinny skis, while Jon hauls around these huge, wide pontoons and skis super aggressively. I guess we have opposite styles, but it works to our advantage as a team because we are each strong where the other is weaker.

The next run down into the Copper Creek drainage is called Madison Ave. It was super fun, although we kinda missed the good snow as it suddenly went from firm up high to mushy down low! Still, the setting was unbeatable.

There were a decent amount of rocks and trees to navigate down lower, but it was not too difficult. It is crazy how fast things are melting out this spring, especially on the eastside!

We skinned up at the base of the valley and started climbing slowly towards the notch north of Copper Benchmark. Even though the sun was still filtered, it felt downright hot.

We briefly tried skinning and then booting up the northwest shoulder of Copper Benchmark, but gave up when we started postholing waist deep and skied back down into the valley. Then we just kept on the normal tour, skinning to the notch.

When we got to the notch, Jon took a snack break as I took a quick 500 ft lap or so back down into the valley we just camp up. It was west facing so the snow was still firm, making for pretty good skiing! Then I skinned back up to join him.

We took a good break together before deciding it was time to head out. We booted down some dirt and then skied leftwards, entering the Early Winters Creek drainage as quickly as possible. We entered this really cool bowl. The snow here was so grabby that I pointed my skis downhill and had them essentially stop, causing me to front flip and completely wipe out!

Once down in the valley, we tried to stay high on the left side, but it was still a long traverse to the hairpin. It went just barely, but the snow might be gone in just another few days!

We reached the hairpin well before noon and started hiking up the road to the next pullout. Quite a few cars passed us as we gave them the hitchhiker thumb. We saw a BMW convertible coming and joked it was the least likely car to stop. Sure enough, a nice man named Abi pulled over and I got to ride back to our car in a convertible! What a way to end the Birthday Tour!