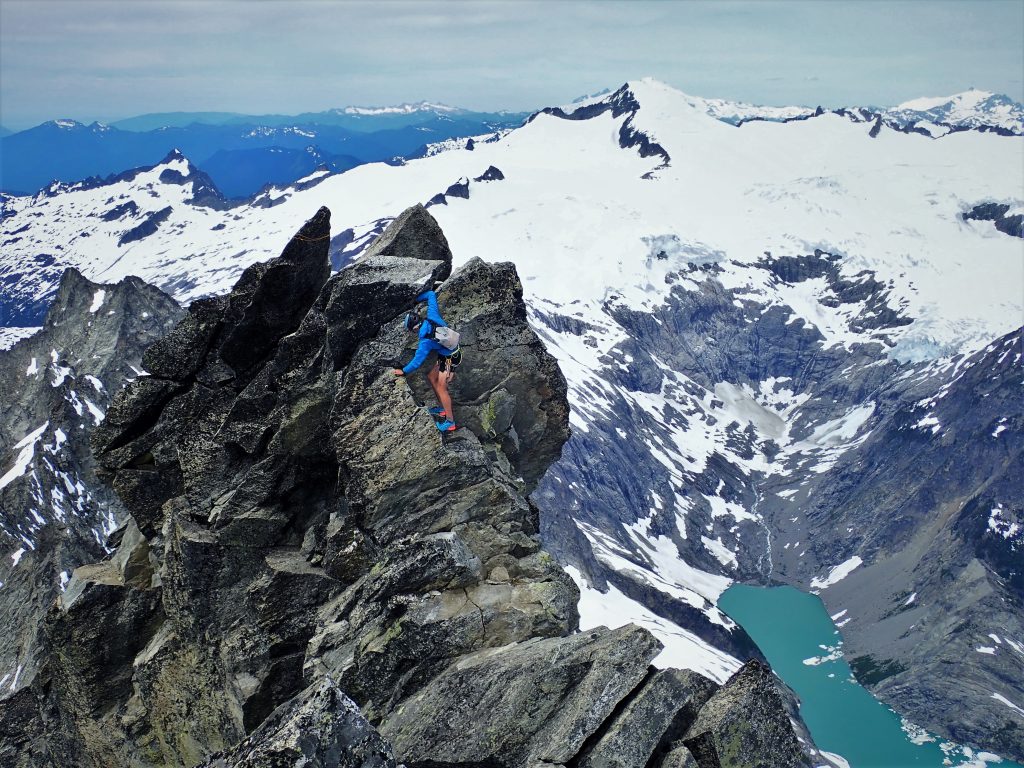 On the Edge of Heaven

Forbidden Peak is a striking peak, both intimidating and beautiful. Eroded on all sides by glaciers, it has three steep faces and kinfe-edge ridges, all leading to a lofty summit that stands as one of the highest in the entire North Cascades. One ridge, the west ridge, has become very famous because of its inclusion in Fifty Classic Climbs of North America. I have wanted to do this route for a few years but knew it could be crowded on a nice weekend, so I decided to take a weekday off to climb it with Anthony.

We got a late start and it was already light out as we started driving north, witnessing a beautiful sunrise on I-5 by Everett. It is so nice with these long summer days to not have to drive excessively long in the dark. We had good conversations and got to know each other better, since this was only really our second time meeting.

We left from the trailhead a little after 7 am and starting hiking up the steep, brushy Boston Basin climber’s trail. I guess it really was not too brushy or overgrown actually for a Cascade approach trail, kind of similar to what I remember the Eldorado Trail to be. It was definitely not as steep as the Snowfield approach.

We cruised uphill at a conversational pace. I struggled a little to keep up initially, but once I settled in to a rhythm, it was comfortable. Pretty soon, we broke out of the trees and got our first clear view of Forbidden and Boston Basin!

I think my jaw must have become unhinged. Boston Basin unfolded before us, this huge moraine cirque with towering rock peaks and ridges thousands of feet above us. In the morning light, the sporadic snowfields mixed with lush green hillsides and roaring spillways down granite slabs. I have been to many places in the Cascades, but this may be the most powerful and stunning.

We dropped into the basin and filled up on water at a stream, less than an hour and half into the hike. There were two people from North Carolina camping in the basin, but otherwise, it was completely empty.

Next, we began a long ascending traverse across the basin towards the glacier beneath Forbidden. We crossed some snowfields and found a climber’s trail up a grassy hogsback feature. There were birds and some huge marmots here.

It appeared the easiest way across the glacier was way around to the left, but it appeared that there was a rock spur ridge to the right of the glacier to might be more direct. We decided to check it out.

A few hundred feet of pleasant class three plopped us out on the upper, flatter part of the glacier! We crossed back onto the snow and continued to slog up. Even though it was early, the snow was mush from the sustained heat of the previous few days.

I believe that the “glacier” has sadly been downgraded to not a glacier. In many places you can see it is only 5-10 ft thick on top of rock slab, although there is alpine ice showing in other places.

At the base of the west ridge couloir, there was actually running water so we could fill up. Then we stepped over the opening lower bergschrund and began the snow climb.

The snow was soft, but plunging an ax was still secure. The upper bergschrund was passable on the left side. After this, it steepened to probably 50+ degrees. I kicked some big steps for Anthony, who was still following in shorts, running shoes, and strap on crampons!

At the end of the snow, we ditched the snow gear and scrambled 100 ft through loose-ish class 3-4 to reach the actual West Ridge Notch. We were nearly 3.5 hours in. Now time for the fun part!

There appeared to be quite a bit of fresh snow on the left (north) side of the ridge, but the ridge itself looked mostly dry! We put our harnesses on and agreed to scramble until we felt we needed to bring the rope out.

The exposure on this route starts early and is relentless! Right off the bat, there is airy step across a huge gap with endless air beneath. We continued up progressively stepper terrain, weaving our way back and forth, sometimes on the left, sometimes the right, sometimes straddling the ridge top.

The moves were mostly 3rd and 4th class with hero jugs and solid rock, but the massive exposure had our constant attention. The sides of the ridge dropped away a thousand feet on either side to the glaciers below. Every hand hold and foot hold had to be 100% trusted before making a move.

I have done quite a few of The Fifty Classics, and with every climb, there is a moment when it becomes completely lucid why this climb is a classic. High on this airy ridge with massive glacial cirques beneath, a turqoise lake over 4000 ft below, and over 6000 ft of relief down to the valley floors, there was no question that this was an all-time classic. Exhilarating, improbable, sublime. We were dancing along the edge of heaven.

We approached a section where the ridge steepened sharply, presumably the 5.6 crux tower. We passed a piton and climbed through a corner on the left. It did not feel any more difficult than some other sections of the route, probably only 5.3 or 5.4, but was more sustained and insanely exposed. You could stare down at your feet and see crevasses on the Forbidden Glacier one thousand feet below.

After the tower and some more airy traverse moves, it was cruiser terrain to the false summit. Possibly the most difficult move of the entire climb was the overhung downclimb from the false summit over to the true summit.

And just over an hour after leaving the notch, we were atop Forbidden Peak! Its position in the North Cascades is so strategic, with endless views south towards the Glacier Peak Wilderness, north towards Eldorado and Klawatti, and down on all sides to huge glaciers. The Boston Glacier in particular was massive, stretching miles from Buckner all the way to the north ridge of Forbidden! I don’t know if I have ever climbed a peak that felt so lonely and aloof, yet in the center of it all. And for miles around, we knew we were the only ones out there.

After a good little break, we decided to start reversing course and heading down. We downclimbed a little ways to the top of the crux tower, where we made one rappel.

We did some more downclimbing and then made a rap off onto the north side to some snow.

After the second rappel, we were able to downclimb the rest of the way back to the west ridge notch. I expected it to feel a lot harder than climbing up the ridge, but it really was not too bad and great practice. Still, we had to be laser focused.

We reached the notch an hour and 20 minutes after leaving the summit, so it took longer to reverse the route than to climb, but that did not surprise us. We downclimbed the gully back to the top of the couloir. One 30m rappel got us through the steepest snow to the top of the upper bergschurnd. We face in downclimbed the snow for a few hundred feet before exiting the couloir and finally taking a deep breath of air to relax.

It was a hot afternoon in the alpine and we refilled with water at the slab before taking off down the glacier, plunge stepping, boot skiing and just sliding around in the messy snow. We tried our best, but definitely did not look as cool as Killian. Time to Play!

Back at Boston Basin, we took one last break to enjoy the immensity of the scenery around us. This is a truly special place we live in. I could keep visiting places like this in the Cascades for the rest of my life and I know I would be content. Days like this are important because they remind me that I have everything I need in life to be happy. I just have to open my eyes, appreciate my surroundings, and let myself become filled with beauty from the raging rivers and tumbling glaciers around me. There is endless energy and raw power in these mountains if we open ourselves to be vulnerable and to fall in love with them over and over again. The same could be said about life.

The descent back to the car was a little hot and muggy, but not too bad since high clouds were filtering the sun. We arrived back at the car a little under 9 hours after leaving. Not bad for a casual outing!

If I had one word to describe the day, it would purity. It felt pure how we moved through the mountains with minimal gear and effort, taking it one step at a time. The setting was pure, from a lush alpine basin to monolithic towering peaks. And the unspoken chemistry Anthony and I felt together was pure. We felt perfectly balanced between pushing ourselves and enjoying the moment, between moving efficiently and safely. It is not too often that you can feel that balance right out of the box with a partner.

The feelings are still raw and the high is still wearing off, but the West Ridge of Forbidden might be the most spectacular climb I have ever done. It has the improbability and exposure of Matthes Crest or the East Ridge of Wolf’s Head combined with the rugged terrain of the North Cascades. From car to summit, you rise over one vertical mile through such diverse and inspiring terrain. Never look down, but do look back and think of where we came from and where we are today. You will never be disappointed.