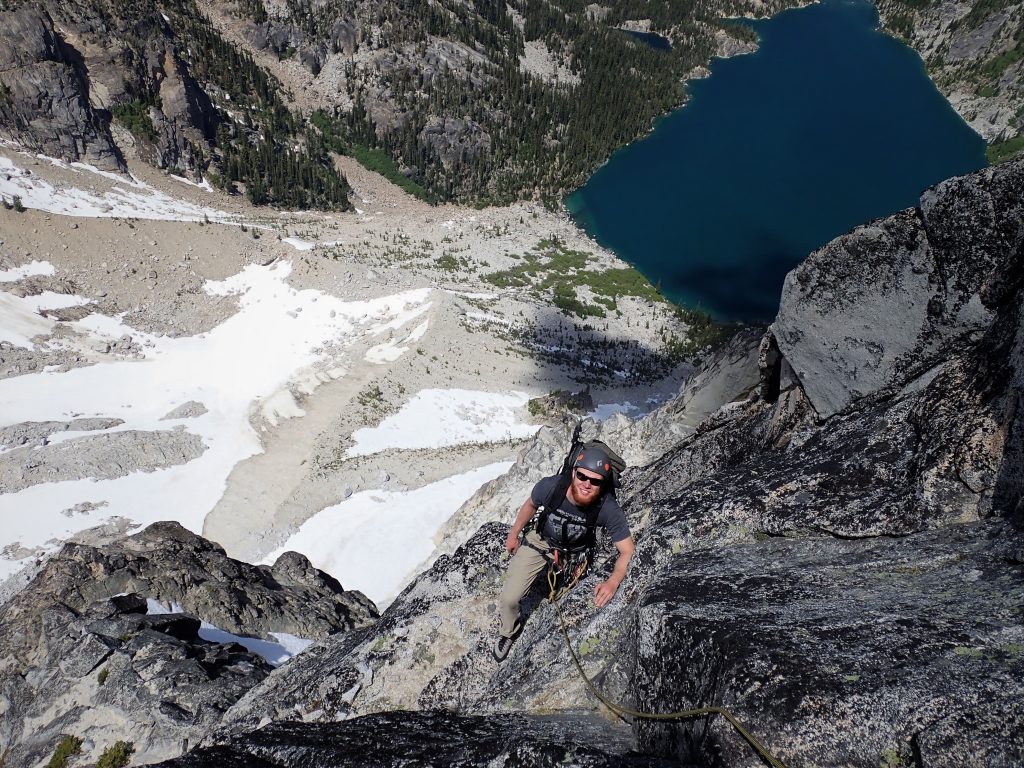 The Jaws of a Giant

Over the weekend, Jacob and I met up to climb Serpentine Arete, a long 2000 ft moderate route up the huge, complex north face of Dragontail Peak in the Enchantments. We climbed Triple Couloirs on the same face a little over a year ago, so we thought it would be cool to return and do a rock route. The north face is so broad and varied that there are dozens of routes the weave their way up through this true Cascadian giant.

I got up at 2 am, ate breakfast, and started the drive over to Leavenworth. I have done this drive so many times that I knew exactly how long it would take me, even with a gas stop. I pulled into the trailhead at 4:59 am, just one minute early! Jacob was up and ready to go.

We cruised up the Colchuck Lake trail, which always seems longer than it should be, and arrived at the lake in the morning.

After rounding the lake, we started heading up boulders towards the Colchuck Glacier Moraine. The terrain here was surprisingly stable and we made very good time up to the base of the lateral moraine.

Lateral moraines always make for nice, efficient travel as long as you don’t have to descend off either side. There were many larches in the barren, rocky soil. They are hardy trees.

Near the top of the lateral moraine, we had to step off onto some snow to get to the orange colored rock that marked the beginning of the route. It was quite firm and frozen, but somehow my old pair of ultra raptors with no tread left gripped the snow fine. We crossed to a rock island and followed fourth class ledges up to a higher snow finger.

From the higher snow, I spotted a nice rocky ledge we could get to and figured that would be a good place to rack up. It was this huge, 20 ft long, 4 ft wide ledge, perfect for switching to rock shoes! We were about 3 hours from the car.

Jacob led the first pitch. It was supposed to be mostly 4th class ledges, but he went too far right and got into some legitimate mid 5th terrain. The pitch ended with some 5.8 lichen covered slab, probably the crux of the entire route!

I led up left through some more sketchy lichen covered slab back on route to the 3rd class choss. I walked up until the rope ran out and set up a belay amongst boulders. Jacob led more easy terrain until reaching a 5.5-5.6 corner. I had to simul some to allow him to finish this section and reach the belay. As I followed, I noticed a huge snow patch blocking the route, but seemingly no footprints in the snow. How did Jacob do this?

However, the answer quickly became clear. Chimney! I chimneyed with my feet on the rock and back and butt against the snow, scooting up the moat. That’s definitely a first time experience!

I led the next pitch, a 5.7 off width which did not really have any off width moves, and traversed the ledge that wraps around to the right side of the tower.

We were now at the base of the crux 5.8 finger crack. It looked pretty steep and intimidating with only intermittent jams. Above, we could see a perfect splitter hand crack. This was definitely Jacob’s pitch.

Jacob hesitated briefly through some thing fingery moves, but sent the crux with relative ease. He looked great in the upper hand crack. Hand cracks are his specialty.

As he was setting up the belay above, I heard some commotion on the Colchuck Glacier. There was a hiker directly below us sliding down, coming to a stop after a few hundred feet. He did not hit any rocks, so I expected him to just get up and be fine, but I heard him moaning about his knee. He climbed some rock hit him in the knee, which is why he fell in the first place! He suspected he had a broken knee.

Luckily, it was dead calm and I was able to communicate with them from 1000 ft above. I yelled to some skiers lower down on the glacier who were hiking up, hoping they could help out the injured hiker and maybe lower him on skis to a safer place. Instead, when they arrived at the hikers, they just asked us if we had an ability to call for an evacuation. Unfortunately none of them had satellite messenger capabilities. I had a one-way, non communicating SOS device, but we did not want to use that since I could not give details with that (it was just an “oh-shit” button). Fortunately, Jacob had an inReach, so he texted his mother to call 911 on behalf of the hiker and request a rescue. His mother responded immediately, saying she had done the deed. Thanks, Mrs. Krantz!

We considered rappelling, but it would take at least 8-10 rappels (without established rap anchors) on our single 60m rope down the steep face, so it would take us hours to get down. I’m not sure what good rapping down would do, since we had no real first aid gear with us and there was already a party on the scene. So we continued on and hoped the rescue would come quickly.

With that settled, I followed the pitch. The lower part of the finger crack actually felt pretty tough, but I am completely out of practice for rock climbing. The upper hand crack was super cruiser.

I led the next pitch. It started with an easy slab traverse and then a super fun 5.8 dihedral! There were bomber finger locks and thin hands. This was my favorite section of the entire climb.

In the upper half of the pitch, I kept wandering upwards, eventually running out of rope and needing Jacob to simul a few feet to make a belay. The rope drag was heinous as I belayed him up. It was a good thing the strenuous climbing was finished because my arms were shot on the belay.

At this point, most of the steep climbing was finished. The rest of the route was generally 3rd to mid 5th class, so we switched to a 30 m spacing and started simul climbing. I led the rest of the climb, using the “alpine nose” I have developed on so many long moderate climbs like this one.

The massive complexity of the entire face unfolded before us. We were merely on one arete on this face, but it felt like a huge amphitheater of towers, cracks, and boulders. Its position above Colchuck Lake was tantalizing.

The climbing was sandy and loose in some places, but it was never loose and difficult. There were a sprinkling of mid 5th moves. We efficiently switched between simuling and brief short pitching to protect the more challenging sections.

Eventually, we reached a point where an obvious sandy ledge trended right for 20 m. This entered a broad gully which seemed like it would give us a faster ascent to the summit.

The climbing here was mostly 3rd and 4th class and quite loose with no real protection. My main skill on display was an ability to tread extremely carefully as to not trundle rocks down on Jacob. If I do this again, I will unrope here and just move together. There was no more 5th class to the summit.

Eventually, the gully led us back to the ridge crest. I traverse right for a while, and then left for a really long time, linking ledges all the way to where the Serpentine Arete joined Backbone Ridge. From there, it was just a walk up a sandy gully to the summit of Dragontail!

Arriving around 3 in the afternoon, we had the summit completely to ourselves! The route had taken us 7 hours and 10 hours from car to summit. Not bad for a 2000 ft grade IV route!

As we basked in the warm sun, Jacob checked his inReach. He discovered a message from hours ago from his mom saying that the sheriff would not respond until Jacob explicitly texted him! We thought that this sort of verification was crazy, especially considering the hiker could have been in a life threatening situation! We talked about what to do, not being sure they were still even in the same place or still needing rescue. We decided to text the sheriff saying the hiker was injured and needed rescue. It was the safer thing to do.

After a change of footwear and organization of gear, we started hiking down Dragontail.

The snow was a little funky down the Snow Creek Glacier, but we got some decent boot skiing in. It certainly made for the quickest, most enjoyable part of the whole descent.

As we passed the little lake near Aasgard Pass, I noticed the nice icebergs floating in the lake. Impulses from my youth began to surge in me and I decided to take a swim. I manage to flop out of the icy water like a beach whale and enjoyed a frozen minute of sun bathing on a little iceberg. Now I can check that off my bucket list!

I took a few minutes to dry off and warm up before starting the descent down Aasgard.

As we were near the top, we heard and saw a helicopter approaching. The sheriff had responded! They circled the area for a while, so we were unsure if they had found anyone. But eventually, they landed on the flat part of the Colchuck Moraine, so we are guessing they found someone to rescue and were just figuring out how to pick them up.

Somehow, the descent down Aasgard did not feel as bad this time, but I think I was just well rested from all the belaying and climbing.

Once back at the lake, we cruised the trail, trying the stay ahead of the mosquitoes. They had followed me the entire route all the way to the summit! I guess it is almost summer…

We got back to the car in the evening, logging a total time of about 13:45, pretty solid considering we were moving casually, dealt with the rescue, had to route find a lot, and I even went swimming!

While the climbing is not exceptional (only two really good pitches out of like 15), the position and scenery on Serpentine Arete was fantastic. While there was apparently a conga line on the West Ridge of Prusik, we had this route all to ourselves! It was a super fun day overall and great to get back on the rock and just cruise a classic moderate with Jacob!