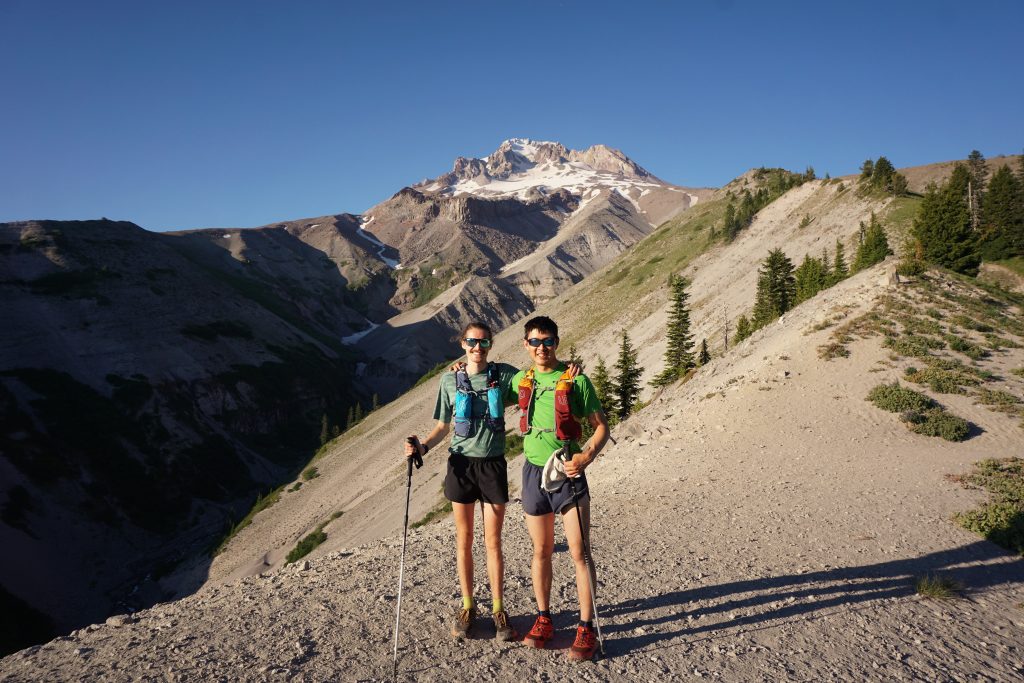 Blake went to school in Portland and has lived there ever since, so we do not see each other as often anymore, but we still make it a priority to visit each other a few times a year. Back in the spring, we planned on doing the Timberline Trail and picked a date in late July that reliably has good weather. It has been a wet July, but the nice weather finally arrived just in time! Ethan, who is still studying at Western Washington, also joined us, making for a full reunion of the trio that suffered through our first ultra together on Chikamin Peak four years ago.

After a late night and way too much traffic driving down from Seattle Friday night, we got a lazy start and pulled into the Timberline Lodge parking lot around 7:30 am. While many people were pulling out their snowboards, we stood out in short shorts and vest packs. After a few minutes of organization and wandering around, trying to find where the trail actually starts (go straight towards the mountain for 400 feet), we were off!

Regardless of which direction you go, the trail starts off with substantial downhill. We chose counterclockwise for no real reason except that the downhill was less (which meant, of course, we would finish with endless uphill). We crossed the Salmon River and then had a fun downhill section to the White River. The trail here was very sandy and fast.

The White River was the first major river valley to cross. Volcano circumnavigation trails get most of their distance and vertical winding up and down from these massive glacial carved moraine river valleys. It was Ethan and Blake’s first time in a place like this and they were blown away by the juxtaposition of the moonlike landscape with nice meadows and flowers around the corner.

From there, we headed uphill into the Mt. Hood Meadows ski resort. The terrain changed dramatically to open forests and lots of, well, alpine meadows.

As we passed under chairlifts, it was impossible for me to escape the feeling of the ghosts of my past. It honestly took me by surprise. No other place in the Washington Cascades has haunted me like this, but I guess there are so many memories mixed together there that it fades to grey. I had only visited Mt. Hood once in my recent memory, but it was a weekend of such intense joy and happiness – but it was also the beginning of the end. So many emotions began to bubble back up inside of me: love, fear, passion, sadness. I just tried to focus on the distracting scenery and keep moving. If my body felt enough pain, emotions would become secondary, right?

After crossing Newton Creek, we wound our way up around Lamberson Butte, beginning our climb to the high point of the day on the east side of Mt. Hood. The view was very nice of the Newton Clark Glacier.

Ethan was starting to feel some soreness in this hip flexor and was unsure if he should continue for the full 40 miles. Blake and I talked to him about it and agreed it would be best if he turned back and waited for us at the lodge. We gave him the car keys and he began the 10 miles back to the car. Thanks for being so flexible Ethan!

Blake and I continued upwards, crossing a few snowfields on our way to the high point at about 7400 ft.

Then we started cruising down a gentle grade on an absolutely beautiful section of single track. St. Helens, Rainier, and Adams glimmered in the distance and the fields of Parkdale seemed only a stone’s throw away. Blake and I laughed with joy as we frolicked on the mountainside; this was a trail runner’s dream.

We passed an older couple who was running uphill from the Cloudcap Trailhead! They said that 15 years ago, they were the only runners up here but now it was common to see people like us running the trail in a day.

The trail got a little rockier and we rolled into the Cloudcap Trailhead, 1/3 of the way through the run, in just under 4 hours. We were feeling pretty good and averaging 3-4 mph, which kept us on pace for a 12 hour finish, our goal.

Next, the trail entered a burn section, switchbacking down to a steep river crossing. The trail was a little washed out here, but it was pretty easy to climb back up rocks on the other side to the trail again.

We continued through open burns, new growth meadows, and generally flat and sandy trail, cruising around the north side of the mountain. We were passing lots of backpackers at this point. We were feeling very good still and were easily crushing 8 to 9 minute miles.

There are less views of Mt. Hood through this section, but when you do have views, you can see the impressive north side Elliat and Coe Glaciers tumbling down the mountain.

We took a lunch break somewhere around Elk Basin, about 20 miles through the day. There were biting flies, which kept our break short and sweet.

Next, we passed through Wy’East Basin and Cairn Basin. The trail was really smooth and easy on the feet, allowing for a good amount of running. We kept drinking straight from the streams, pounding as much water as we could on this hot sunny day. We knew that if we could stay ahead of the bonk, we had the loop in the bag.

As we curved around McNeil Point, we entered a long stretch of gentle downhill and flat along a ridge. This area was swarming with day hikers and we passed dozens per minute! It was the perfect grade for downhill running so we moved quickly but my quads started to feel the pounding. I am very fit for uphill hiking, but I do not run much, so the running was feeling pretty exhausting!

We passed the Cutoff Trail, but did not have a map so we did not really know what this was. Turns out it cuts off this big unnecessary loop around Bald Mountain, but I guess then you would not be doing the true Timberline Trail! Plus, the views as you enter the Muddy Fork Canyon are beautiful.

The trail surprisingly holds elevation as it horseshoes all the way around the Muddy Fork Canyon.

As we began a slight climb and then descent out of the canyon, I started to feel cramping in my lower legs, both the shins and calves. I decided to use up my electrolyte drink mix and increase the shot blocks. It was a good sign that neither of us had bonked and we were over a marathon in.

Just when we thought we were at the low point, the trail kept going down and down more. And what goes down must come up. Luckily, we were in the cool shade of the trees during the heat of the afternoon. Romona Falls was nice, spraying a cool mist on us. I had a headache on and off through this section.

As we crossed the Sandy River, we knew this was the true low point of the day and there was a huge climb ahead of us. This was the only crossing that was really challenging, probably because it was late afternoon. Both of us slipped off the slick log and got our feet wet, but we did not really care at this point.

From the Sandy River (elev. 3200 ft), we began the grueling climb back towards treeline, the car, and food. We were on the PCT now, and, predictably, it had the worst views of the trip (this is why I have not done the PCT yet). At this point, we were definitely beyond running any significant uphill, but we still managed a 3 mph power hike, just dropping more and more vert in the bag. My legs felt wobbly and my shins were on the edge of cramping, but somehow my energy level felt fine. Maybe the bonk would never come. That would be a first.

Slowly yet surely, we gained elevation and started to have occasional views of the west side of Hood. There is something so perfect about the way the evening light reflects off the gold volcanic sediment, the blinding glaciers, and the soft evergreens. I’ve seen it before, last summer on Mt. Adams. It infuses any mountain runner with a shot of energy, the energy that exists deep within us and permeates the mountains around us. Here we were again, racing the sun around the mountain like the hands of a clock.

We descended down into Zig Zag Canyon and then back up for one last climb. It seemed to go on and on. Just when we thought we were at the top, another ridge appeared beyond us and the gentle climb continued. So we kept the bag open, pouring in more and more vert.

Above all else, ultra running is about joy. But suffering is probably secondary. All day, Blake and I had prepared ourselves mentally for the suffering. We were able to embrace it with tired arms and legs but a soul full of youth. I couldn’t but help appreciate how lucky we were to be here, at this moment, capable of what we are doing. The future is intimidating and it feels like an uphill battle to get back to the peak of life, but I guess it is not so bad when you think of only putting one foot in front of the other and regaining that stride one mile at a time. Little goals can lead to great things.

Suddenly, we passed underneath a chair lift and we knew the end was near. Blake tagged the PCT sign and ripped off down the paved trail back to lodge (I think his watch read 5:00 mile pace for a short bit!). It was the golden hour on the mountain, but I was ready to say goodbye to this heavy place and begin the long journey home.