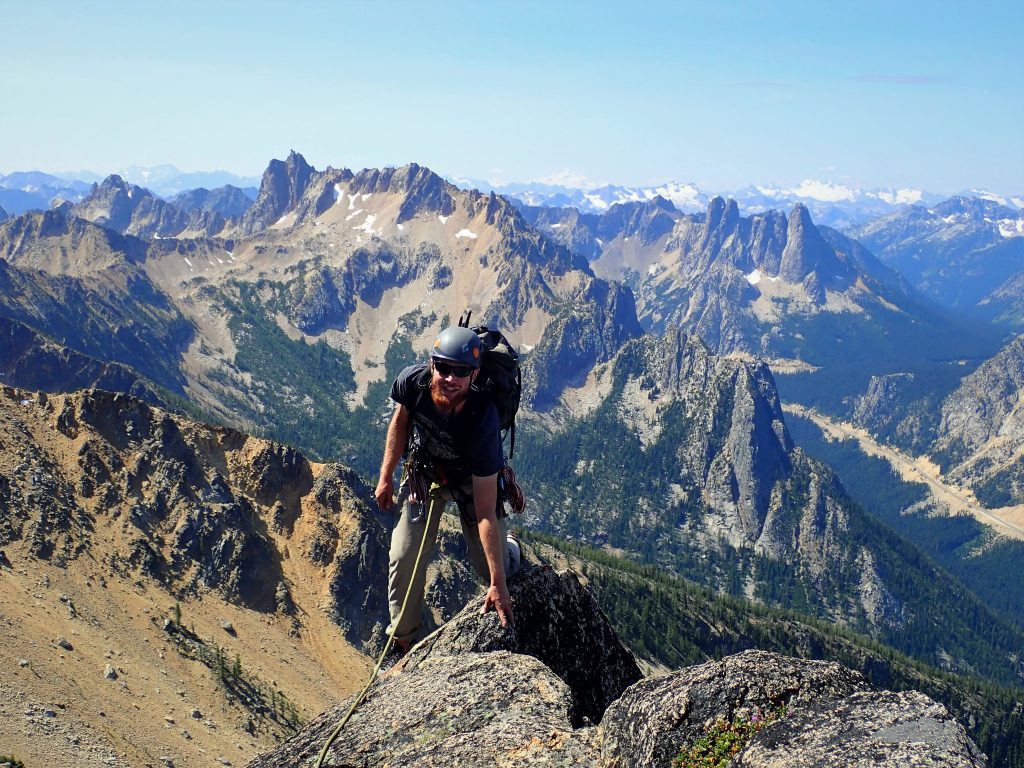 A Big Taste of the Wine Spires

When planning our WA Pass Four Day Blast, Jacob and I agreed that long and moderate was the name of the game since neither of us were in good climbing shape. Possibly the best long moderate in the area is the linkup of the West Ridge of Paisano Pinnacle (5.8+) and the North Face of Burgundy Spire (5.8) in the Wine Spires. The first route just naturally flows into the other, yielding about 12 pitches of quality climbing on solid granite. This seemed like it would be our longest day trip, so we planned on climbing it first when we were still fresh.

We left the car around 6 am and began with the first crux: descending the choss pile to the river crossing. Then it was up, up and up. People complain about this approach to the Wine Spires but at least it gains elevation quickly on a pretty good trail and we had plenty to talk about.

Somewhere a ways above the 6600 ft bench, we started to contour right off of the “trail” towards the lower part of Paisano Pinnancle. Somewhere in the dry sandy gully, I saw lush green flowers. I followed the flowers to the source and found an incredible “Jesus Spring” (named after He who turns water into wine) where one spout emerged from the ground briefly and then returned to the Earth. Not expecting any water sources, Jacob and I had carried all our water for the day, so drank a full liter and then refilled. No dehydration today!

At the base of the route, we met two women planning the linkup also. One of them was Chinese and probably in her 50s, definitely a unique demographic amongst alpine climbers. There was another party ahead of us, already climbing. Busy weekday at the Wine Spires!

Lower down, the west ridge is more like a face climb on cracks. There’s lots of stepping left and right to follow the short crack systems. The rock was really good with some splitter sections, but they were never too long.

We followed the super topo and found it to be almost too detailed! They show every little micro-feature sometimes, which can make things a little confusing. But their topos are usually quite reliable, as long as you just don’t interpret everything too precisely.

Higher up, the route became more like an actual ridge climb with some exposure and fun aretes.

Eventually, we got to the 5.8 face pitch. Supposedly this pitch is very scary and runout without a .2 cam, but I had brought one. I thought that even without it, it was an easy enough sequence that most people would be fine. It definitely felt easier than other 5.6-5.7 face sections of alpine routes. Usually, “5.8 face” in an alpine route means like “palms-sweating, legs-shaking, holy-shit-this-is-scary” kind of climbing.

7 total pitches brought us to the nice little “summit” of Paisano Pinnacle (really it feels like just a sub-summit of Burgundy Spire). It was still morning so the lighting was very nice to the west. We took a little break to snack and let the party starting Burgundy get ahead of us.

It is always inspiring to return to this majestic WA Pass view with the knowledge that you have unlocked more of the secrets of the distant peak beyond. This time, Jacob and I could gaze off to Dome and the Gunsights, remembering that incredible day a month ago when we walked across the clouds.

There was a little bit of 4th class down climbing and scrambling to get over to the North Face of Burgundy. Since we would be rappelling back down the route, we left some gear here.

I led the initial pitch (which is actually the third pitch of the route). The rock was not quite as bomber and secure as Paisano. I got to a crux 5.8 layback, which was surprisingly technical and not burly for the grade. I stretched the rope, made an anchor, and then brought Jacob up.

Jacob led the next pitch up to Burgundy Ledge. He went a little too far left and had to do some weird traversing to get back to the right. Make sure you don’t go too far left on this one.

At the ledge, we walked down and right through the tunnel. During the original 1953 ascent of Burgundy Spire, Beckey and co. did not find this tunnel, which gives access to 5.8 terrain up to the summit. Instead, this 6 pitch route took them 3 days and involved lots of aiding, fixed ropes, and big wall tactics. Now, we were cruising up this spire in a short afternoon! It is incredible how modern gear has changed climbing.

This leads to a large ledge where there are three potential summit variations. The left is a 5.10 chimney, which of course Beckey took. The middle is a scary 5.8 slab. The right, although indirect, is 5.8 cracks, so we choose that one. The party ahead of us apparently took the 5.10 chimney, and the follower was moaning and groaning very loudly as it flared up high. Then she saw us and seemed embarrassed. We congratulated her on the send!

I led a rope-dragging pitch up and right to a horn that matched the description in the guidebook. Jacob led the last pitch, starting left and then climbing upwards to the final OW crack. We are pretty sure that he found the correct OW crack, but the section below it was strangely covered in lots of lichen, suggesting that maybe we were off route. At the final OW, he did not even place the #4, which I had carried the whole way for this pitch! I guess it was just “training weight”….

Burgundy Spire is often considered one of the 10 most difficult peaks to climb in WA by its easiest route. Most peaks have routes easier than 5.8, so this rating is understandable.

It was interesting to consider the thought of how this area would have changed if a huge ski resort had been installed on the Silver Star Massif back in the 50s. There would be dozens of rock routes on the wine spires, Mazama would be a large resort town, and the dry pow would be amazing. But ultimately (and thankfully?), Whistler was chosen instead.

The rappels down were pretty easy, essentially just reversing the route back down to Burgundy Col. I think it took 9-10 rappels since we did many shorter rappels.

We were reminded how the most important piece of gear on any climb in the Wine Spires is trekking poles. The choss/sand on the descent is so bad!!! It is like sand covering slabs. You cannot really grip, you cannot really kick steps, you just fall in a hopefully controlled manner down the eroding hillside. Maybe some day the Access Fund will get up here and help consolidate all the trails like they have done in the Liberty Bell Group, but this also keeps down the crowds.

We got back to the car a little before 7 pm and headed down to Mazama for some pizza! It was a fun, chill day, climbing 12 pitches on stellar granite, and it was nice to know that I can still do this rock climbing thing. Overall, the climbing was good, not great, but the relatively easy approach and great views are hard to beat!