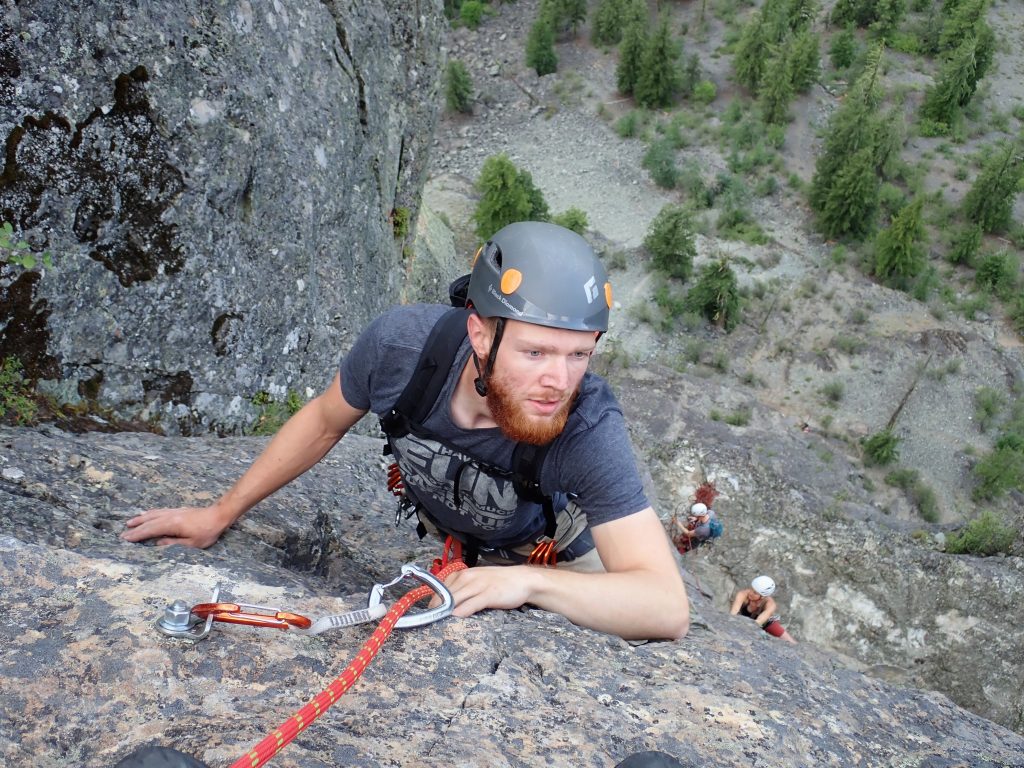 The Longest Sport Route in the US

Going into the weekend, Jacob was interested in doing Flyboys down in Mazama. I am not usually as interested in sport routes and am especially poor at sport climbing at the moment, but it seemed like a good change of pace from alpine trad, clipping something like 300 bolts on an 18 pitch sport route. Additionally, the weather looked rainy at WA Pass one day, so we planned on heading to Goat Wall, where maybe the temps would be reasonable as a result of the weather.

We left the car around 6 am and hiked up to the base of the route. Even on a Friday, there were two other parties ahead of us. Down the valley, a rainbow appeared and we felt some raindrops, but it did not seem like it was going to rain significantly.

Jacob and I swapped leads and moved pretty efficiently. It was obvious that we were all going to be limited by the speed of the first group, so we took a relaxed attitude. After all, this was our “rest day”.

The cloud started to break up and it was a nice sunny and windy day. The wind kept things cool and I actually wore a thin wind jacket most of the time. Not your typical August day in Mazama!

I found the crux one third of the way through the route to be pretty challenging for a 5.9. Maybe I am just in really bad shape – no, I am in really bad shape – but traversing through an overhang on small crimps with no feet doesn’t really seem like a Mazama 5.9. Jacob led this pitch thankfully since I flailed on top rope.

Throughout the climb, we got friendly with the couple climbing behind us, Sam and Ryan. They were hilarious and Sam’s sarcasm definitely rubbed off on us. She complained about nearly everything, especially the lack of helmet on the lead climber in front of us.

This route is only 18 pitches because many of the pitches are very wandery. There is a lot of ledge walking between pitches, some of which have abominable bolts on 2nd class terrain. We even soloed one “5.4” pitch where we just walked up slabs with the rope around our necks.

The descriptions by the guy who bolted this route are pretty hilarious. He oversells basically everything, trying to make his climb sound as epic as some alpine climb in the Bugs or Yosemite. But the last pitch was pretty cool, with solid, steep 5.9 climbing to the top of the wall.

All the other parties had rented bikes and stashed them at the top for the ride down. Jacob decided we were going to do the unthinkable and rappel the 18 pitches, even though a car shuttle could have been available to us. However, once we got going, the rappels were not that bad. The rappel lines are very clean and well designed. In fact, I think the rappels might be a finer creation than the route itself. We descended the entire route in just over 2 hours.

We got back to the car a little over 12 hours after we started, not bad considering we spent a few hours just chilling and waiting for slower parties ahead of us. The climbing was fun, although it felt really weird to sport climb, since it had been almost a year since I had sport climbed! And it was nice to share the wall with my best friend Jacob and some new friends, Ryan and Sam! Now back to the alpine…