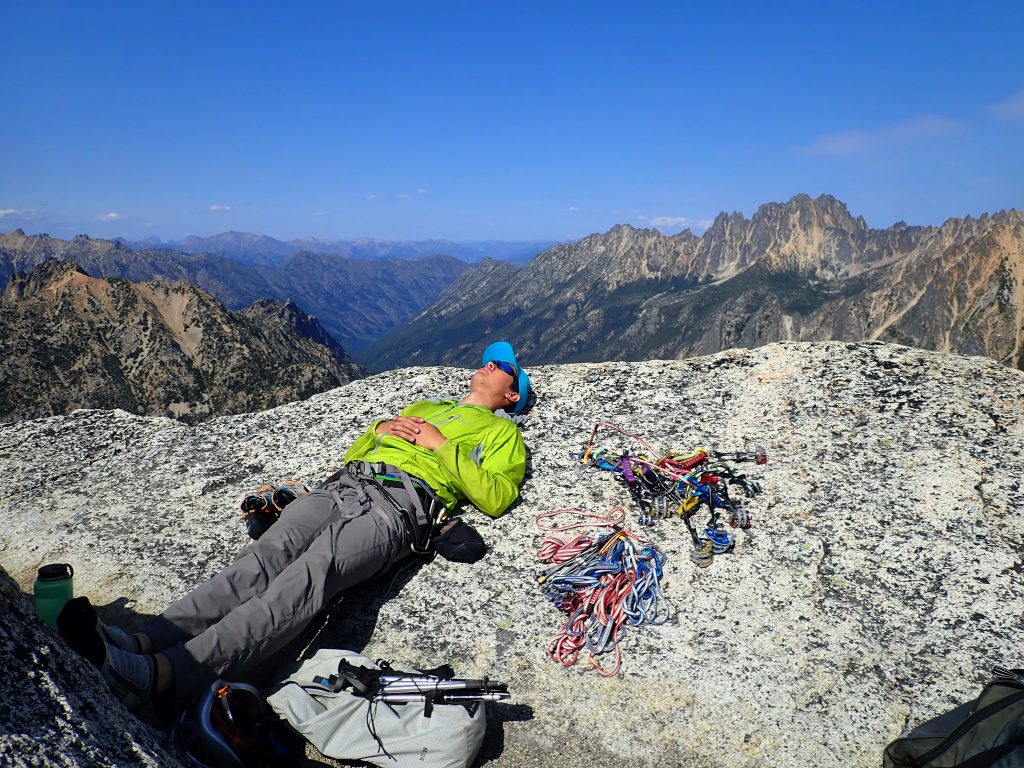 During our first two days of our WA Pass Four Day Blast, Jacob and I had climbed over 30 pitches on our Burgundy-Paisano linkup and Flyboys! So we slept in the morning of the third day and planned a chill climb of the NW Face of Liberty Bell. Apparently this climb does not get climbed very often, but it sounded fun: a full pitch of 5.9 dihedral.

We had a slow hike up towards the Bell, chatting with the Access Fund, Washington Conservation Corps, and other organizations working together on the project to consolidate the climber’s trails and restore vegetation. They have done an incredible job over the last few years! Now there is a single trail that climbs towards Concord as long as it can before breaking off into the loose Liberty Bell gully, minimizing the time in this hazard. Thanks for all the work!

A few hundred feet before the start of the Beckey Route, we broke off and climbed a low 5th step to the left that got us onto the NW plateau of Liberty Bell. People describe this approach as difficult to find, but it really is not. If you’re climbing more than 10 feet of 4th-low 5th, you’re at the wrong spot. It’s not that hard.

The NW plateau is a cool part of Liberty Bell that few get to experience. There are nice larch groves and great views of the surrounding area, away from the chitter chatter and belay calls of the Beckey Route.

Unfortunately, the start of the climb was still in the shade, even though it was 11 am. It was unseasonably cool for early August. I guess we should have started even later!

I led the first pitch, some low angle 5.5 crack. The climbing was surprisingly thoughtful and definitely harder than 5.5 if you didn’t use the tree partway through (trees are aid, right?).

Jacob took the second 5.7 pitch, which also had some very fun moves for the grade. From there, we moved the belay up to the base of the third pitch, even catching a little warm sunshine on the way.

The Supertopo showed three crack systems in the 5.8+ flakes (“the mental crux”). Supposedly, far to the left was the Remsberg Variation, which ended in 10d slab, so we did not want to get on that. We looked up and saw three obvious crack systems leading up from the ledge and thus figured that any of them would be correct. The middle one was suspiciously splitter with an obvious hand crack roof. It was just too good to pass on.

I started up the pitch, climbing perfect handcrack. My feet stuck incredibly well on the immaculate rock. It was honestly some of the best alpine rock I have ever climbed. As I approach the arcing roof, the jams got bigger and I started sweating. I knew I needed to change my body position and commit to the roof on solid hand jams. After a bit of trying to rest and hang there, I finally committed and pulled the roof, which definitely felt 9+.

My joy was immediately smashed: the crack system petered out in the next 10 feet, leading to a blank slab and a few distant bolts. “Shit! I’m on the Remsberg Variation” I yelled down to Jacob. I plugged in a cam and told him to take up the slack so I could rest for a moment and think about what to do.

As awesome as that roof send felt, we knew I shouldn’t attempt the runout 10d slab right now. So how to get down? Leave a cam and rappel? I didn’t want to do that, so I resolved to downclimb the pitch.

The hardest part of the downclimb was definitely the initial roof. After that, I got into a groove and it was not actually too bad. I just took it slowly and focused on my feet a lot. Thankfully, I discovered that downclimbing 5.9 crack is much easier than downclimbing 5.9 face!

Back at the ledge, I took a break to relax and recover from that battle. My hands were bleeding from fist jams in the roof. But after a few minutes, I felt good enough to lead up the real flakes. The Supertopo is way too detailed and shows many flakes, which led us to head up the Remsberg Variation. There are not multiple flake crack systems: just one. So take the crack system on the right, it’s that simple. Don’t let Supertopo fool you. Beta-overload.

The real flake pitch was no gimme. There were some insecure, techy layback moves on less-than stellar gear and one airy step across. It was quite a fun pitch and nice to send it right after getting chunked!

We entered a cold corner at the base of the final pitch. I put on a windbreaker, but would later regret that I did not put on a fleece, as this would become one of the longest and coldest belays of my life.

Jacob led up the corner. One section down low was very thin and cruxy and he took his time placing micro cams and small nuts. Slowly, he made progress, but the climbing continued well after it appeared he would have reached the end of the pitch. How long was this pitch anyways?

The wind picked up and I could no longer hear him. We shouted at each other, but could not discern words. All of the slack was gone from the rope and after waiting a few minutes, I felt a tug and assumed that it meant I was on belay. I was super cold and ready to go. But when I started to move, none of the slack was taken up. So I just had to hang out there for a long time, not sure what was really happening. Finally, the tension seemed more consistent and I could start climbing.

I began to feel my hands again as I entered the cruxy spot down low. It had some absolutely delightful laybacks, finger jams, and fancy footwork. Whereas Jacob had stemmed out onto the right wall, fatiguing his right leg, I decided to gamble and trust my feet in the thin seam in the corner. Since it was maybe only 70 degrees, my feet stuck great and I cruised up the corner. This pitch was so much fun, and I finally felt the joy of technical rock climbing coming back to me, something I have not experienced as much this summer. I felt like I could once again honestly call myself “climber Kyle”.

Near the top of the pitch, there is a completely blank section of low angle corner. I felt exceptionally daring and simply walked my feet up duck-footed in the blank corner, relying completely on the grip of my shoes, sending 5.9 alpine without hands!

At the top of the pitch, I found Jacob exhausted from a subpar belay. The pitch was longer than we both expected, so he was not able to reach a good belay with our 60 m rope. He had been looking for me to simul climb some, but I did not hear him well enough to realize that was going on. Instead, Jacob slung a little shrub and threw a cam into a crack nearby. It sufficed, but I can see why he was stressed out.

We put away the rope and scrambled over to the true summit of Liberty Bell. Somehow, we were all alone on this popular summit on a sunny Saturday in August!

After a nice nap break on the summit, we headed down. There were about 6 people in line for one of the rappels. Some apparently had never rappelled before. It’s always annoying when people are up on popular alpine routes and do not even know how to rappel! I honed my multi pitch skills at chill crags and obscure multi pitch routes before heading out into the alpine.

To make things worse, there was this super impatient woman climber behind us. I mean, you climbed Liberty Bell on a weekend! What do you expect? And her dog, which was left down at the notch, was barking up a storm at times in the gully. Is it even legal to bring a dog up there? I guess if it’s not in a wilderness area…

The hike out went quickly, thanks to the nice new trail that the Access Fund helped create! Even with all the shenanigans, the trip still only took us a bit over 8 hours roundtrip. We both agreed that it was an exceptional four pitch climb (and I even got a bonus pitch)! I think it was the my favorite climb in the WA Pass area yet!